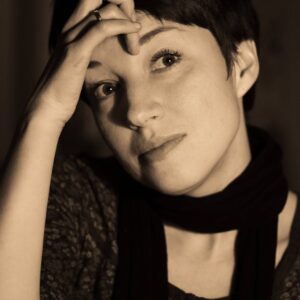 A POEM IS in its rhythm, and as our eyes move from right, left to right, a poetic line turns its cheek away from us each time. As I look up and down Yulya Tsimafeyeva’s short lines, I see poems that run, hurry away from being caught; one-legged poems—one leg on the page, the other outside. Hers is a voice void of any nostalgia for fixity or affirmation. The poems roll out of breath: whether on a city street or a forest path, they move forward, turn abruptly, as if trying to ditch their readers before the corner of a line break.

Belarusian poetic tradition has long carried the ungrateful burden of national affirmation. In the colonial context where one’s historical presence is constantly questioned, where one’s sense of cultural belonging boils down to a clot of saliva spat out during a heated argument over language, borders, artists and general, poetry, written predominantly by men, has always served as an affirmation of manhood, and statehood, a cradle of abstract pathos, a lyrical I performing its formal bows in the poorly fitting costume of a national I.

Between these poets of cultural affirmation and the poets of silence (let’s call them that, those many dozens of Belarusian artists murdered during the years Stalin repressions), comes a voice of a woman—and a woman in a patriarchal world is always somewhat of an immigrant—whose language is hard, defined, and precise. While this voice seeks to find the proof of its humanness, such discovery doesn’t gratify. Instead, this voice is constantly surprised by the manifestations of its humanness. This is the poetry of wonder and strangeness. It doesn’t argue with the blurred borders of history and geography, but blurs them even more, until nothing is left but this voice and whatever is situated immediately in its reach. After decades of encyclopedic descriptions of rural life, changes of weather, and rituals of sowing and harvesting, the Belarusian landscape of these poems reminds me of Kafka’[s landscape—its obsolete. Obsolete as well is the historical context. There’s a street name but where is this street? In space!

As I read Tsimafeyeva’s poems, I find myself agreeing passionately with their insistence of keeping only one leg on the page, with the quickness of their turns away from the reader. With Yulya Tsimafayeva, I say: let us keep wondering at ourselves; let us keep confusing others. To those that call us ridiculous, let us show them our beards on girlish faces and laugh, our lips moving like borderlines on our faces.

A poet’s body belongs to his motherland.
Motherland speaks through the poet’s mouth.
Poet’s eyes see how unfairly it suffers.
Poet’s ears hear the agony of the innocent.
Poet’s hair stands on end,
Poet’s legs burst into oaks,
Poet’s hands fold into fists.

Undeniably, a poet’s body belongs to his motherland.
Motherland! Can you speak for yourself without poet’s help?

And would you like my body, the body of a poetess?
My blood is as hot,
I got hands, legs,
Seeing eyes, hearing ears,
My mouth is no smaller than any poet’s.

You don’t wish to respond, motherland. You turn away.
Perhaps we are too much alike.
You’d rather be weak, don’t you,
motherland?
You want the poet to speak for you,
to pity you,
to wipe your tears,
to sing praises
to your suffering
and your famous coping mechanisms?

Even now you are not listening,
Tsk-tsk: you are whining to your poet.

No motherland, you don’t need a body
of a poetess.

Translated from the Belarusian by Valzhyna Mort