What kind of music / can you put a hole through’: Rachel Galvin’s Civilian Poetic

By ilya Reviews No Comments 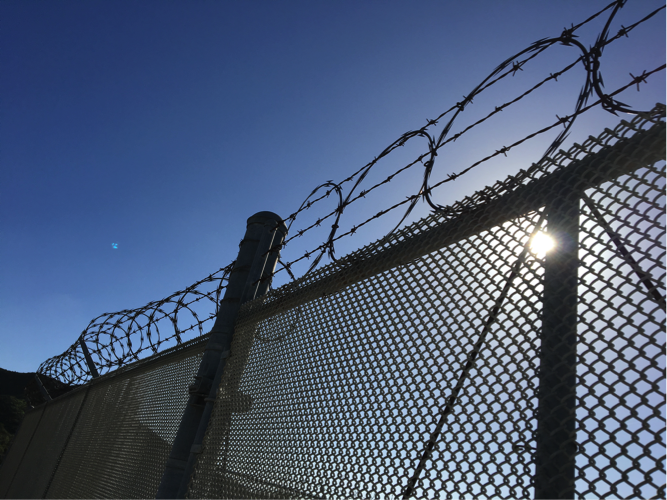 In a recent interview with the Los Angeles Review of Books, Rachel Galvin argues, “Poetry, like journalism, is a first draft of history.” In her second book of poems, Elevated Threat Level, published in a slim, elegant edition by Green Lantern Press in 2018, Galvin offers a sustained and intimate draft of the history of the present. The book comprises many different kinds of writing: from lyric expressions of desire to taut faits divers, documenting the murders of journalists around the globe. Personal and political, local and international, her writing crosses many of the boundaries that divide contemporary poetry—into avant-garde and lyric narrative traditions; into discrete spheres of national literary production. Indeed, in its diversity, her book challenges its reader to assemble its various pieces, to understand the subterranean connections that bind them together. For instance, in “My Life with Private Equity,” Galvin precisely and hilariously documents the ubiquity of capital, its presence in even the most intimate (and private) aspects of daily life:

“I apply my private equity eye makeup while private equity / keeps a private eye on me in the mirror and I swallow / my morning private equity drugs…” (42). One poem later, in “Matadora,” the reader finds Galvin in altogether different mood, romantic and lyrical: “The full skirt of it, sweeping her arm / as she waited, stone drunk, for the taxi…” (45).

The juxtaposition between these modes of writing—so rarely gathered under the binding of the same book—not only testifies to the range of Galvin’s skill as a poet. It also challenges the reader to assemble the pieces: to articulate the book’s underlying project.

The solution to this challenge lies in the elegant, compact definition of poetry that Galvin offers to the LARB: in all the various moods and modes of her writing, Galvin is dedicated to drafting the history of the present. Her account of the present is complex and rich: it encompasses everything from erotic desire to the oceanic movements of international capital. But, as the title of her volume suggests, with its intimations of national (in)security, at the heart of her work lies a precise and exacting attention to the violence of the present: its endless imperial wars, its ecological crisis, its slide back into fascism. In Galvin’s account of the present, the most mundane acts and the most luminous are haunted, shadowed, by ongoing violence.
Galvin is perhaps best known for her work as a translator and a scholar. Elevated Threat Level makes a strong case that her poetry deserves equal consideration. It is not a separate body of work: it is a vital organ in an ambitious, dispersed, and yet continuous intellectual project. Indeed, Elevated Threat Level calls into question the disciplinary and institutional distinctions between the scholarly and the poetic: it not only grows out of Galvin’s scholarly work, it also embodies and advances many of the most urgent political and ethical questions she raises in her scholarship.

Consider, for example, Galvin’s monograph, News of War: Civilian Poetry, 1936-1945, also published in 2018 , which investigates a number of civilian poets, including César Vallejo, W.H. Auden, and Raymond Queneau, who “felt responsible for writing about the wars of their time, but were troubled by the sense that they did not have authority to write about what they did not witness first hand” (3). This urge, this ethical imperative to “write the first draft of history,” raises urgent political questions for the poets in question. As Galvin writes, summarizing their difficulty:

“It may seem futile or even unconscionable to compose poems while others are suffering and dying. Would noncombatant writers better employ their linguistic skills by working as journalists…in the hopes of encouraging individual and collective action?…[I]t might be wiser still to put down one’s pen entirely and take up a rifle or a drive an ambulance. (3) For poets like Auden and Vallejo, the atrocities of the Spanish Civil War and the Second World War raise an existential question about the art itself: does poetry have any value or utility in a time of crisis and devastation?”
It is hard not to feel the force of this existential question in the present. Yet, as Galvin notes in her LARB interview, contemporary poets like Julianna Spahr and Claudia Rankine have found effective, urgent tools to respond to the metastasizing violence of the present—in part by returning to the strategies she describes in News of War: “Many poems written in the U.S. between 2001 and 2010 draw on strategies and concerns of World War II-era poems, often quite explicitly, as they urge critical distance from contemporary U.S. war culture.” Elevated Threat Level is a crucial contribution to this growing body of literature, in part because of the intensity with which it meditates on the category of the ‘civilian.’ In News of War, Galvin notes that “the very category of ‘civilian’ was put under duress during the Spanish Civil War, as noncombatants were subject to mass annihilation on a record scale…” (4-5).

Elevated Threat Level carefully documents the persistence of that duress, the way that mass civilian casualties remain a constant in contemporary conflicts. But Galvin also registers the way that the civilians at the center of empire, distant from drone bombings and special forces raids, are themselves inextricably entangled in violence—even if they refuse to see that violence. Galvin stages this refusal in the book’s first poem, “In My Sights, Sister”:

My eyes are polished smooth by sight. They clot like crystals in storm glass,
like beakers of toxin. If we had seen what had been done,
what the helicopter pilot did in our name,

what the special ops team did in our name, what they did
with their hands in our name. What if it were my sister,
what if it were her, what? If we had seen with our own smooth eyes. (1)
The poem takes as its occasion an airstrike carried out in Iraq on July 12th, 2007 by two Apache Helicopters, in which “a dozen civilians were killed or wounded, including two journalists…” (69); WikiLeaks later leaked footage of the attack, taken by the helicopters’ gunsight cameras. This is one of the peculiarities of contemporary warfare. One can witness its minute, grinding violence, often in exactly the same way as the drone pilots and soldiers who fight it: through grainy electronic interfaces, video and audio streams beamed across the world. One becomes a bystander, a civilian, only by looking away—by refusing to look. Galvin does not have Auden or Vallejo’s problem: her speaker could see the war first hand, as intimately as anyone fighting it. Thus the grizzly pun at the heart of the poem on the word “sight”: simultaneously the personal capacity to see and the “gunsight” that records and propagates images of violence. The opacity of the speaker’s sight is in inverse proportion to the lucidity of the gun’s sight. Her eyes, “polished smooth by sight,” serve as an uncanny and elegant metaphor for the fatigue of living in a moment where violence is so precisely documented: even if one wants to look at it squarely and honestly, eventually the faculty of sight itself wears out under the strain.
As the agonized hypotheticals in “In My Sights, Sister” suggest, such fatigue closes the possibility of solidarity, intimacy, between civilians on opposite sides of a conflict like the Iraq War. This lost intimacy haunts Elevated Threat Level, throwing its shadow over poems like “As We Watch the Lights of West Baltimore,” an otherwise tender and affectionate poem:
Between your silences
please allow me to insert
a few fingers and hook you
tenderly, here, where
your Buffalo roam… (50)
Galvin challenges her readers to ask what kinds of intimacy and solidarity are possible in the present—and what kinds are foreclosed. Why should the “we” of “As We Watch the Lights of West Baltimore” enjoy an intimacy that seems blocked in “In My Sights, Sister?” What forms of power uphold that separation—and how can they be contested? Further, Galvin presses her reader to identify moments of transgressive intimacy, to read that intimacy as a form of political resistance, as in the opening of “Detonation Sonnet”:
A pair of women pass, touching each other’s cheeks.
The question is not where they are from but when.
The photos have not yet been released
with or without flags for faces (10).
These are potentially universal figures: the poem suggests that they might appear at any time, in any place, avatars of tenderness and repair. This tenderness does not disarm or defeat violence. With its taut, paratactic juxtapositions, the stanza invites the reader to assemble a narrative: this seems to be a moment of tenderness just before a drone strike. But their tenderness does provide an alternate principle, a flash of possibility beyond violence, outside its shadow. The question, she asks, is how to bring such possibility into the present.
In moments like this, Galvin seems deeply critical of the media environment of the present. The women’s bodies seem to have been carefully documented, photographed—but those photographs remain under state control. And when they are released, they do not offer restitution or repair: “The photographs and not the bodies arrived” (10). Despite this critique, journalism—and the economic and political threats it faces in the present—remains at the center of her book. In “Gutenberg Nation” she elegizes the widespread closing of newspapers in the United States, assigning them birth and death dates. And throughout the book, she documents the murders of journalists around the world in brief prose poems, modeled on Félix Fénéon’s faits divers, titling each with only a date, as in “January 2015”:
An extremist claiming to represent the Islamic caliphate used a knife to decapitate a Japanese journalist who covered civilian suffering in war zones and who had gone to Jordan to seek the release of another Japanese citizen decapitated last week. (34)
The poem is both matter-of-fact and devastating. As these compact notices accumulate—there are eight in total—they form a kind of long poem, woven through the book and punctuating its concerns. (Indeed, it is the book’s only long poem—which is perhaps a surprise given the ease with which Galvin moves between different modes of writing. Elevated Threat Level is a slim, concise volume: only 67 pages in print. One hopes that future volumes will find her stretching her legs, working on a grander scale). In these faits divers, Galvin insists that journalism not only documents violence: it is itself subject to it. As the title of one poem announces, “In Wartime There Are No Civilians.” Perhaps journalism is not, in itself, enough to repair the wounds of the present—perhaps it even has a hand in propagating those wounds. But it shares a common responsibility with poetry: to offer an unflinching, honest history of the present. In Elevated Threat Level, Galvin makes her own contribution to this shared labor—and calls into question the categories through which we understand the present: poet and journalist, civilian and combatant.