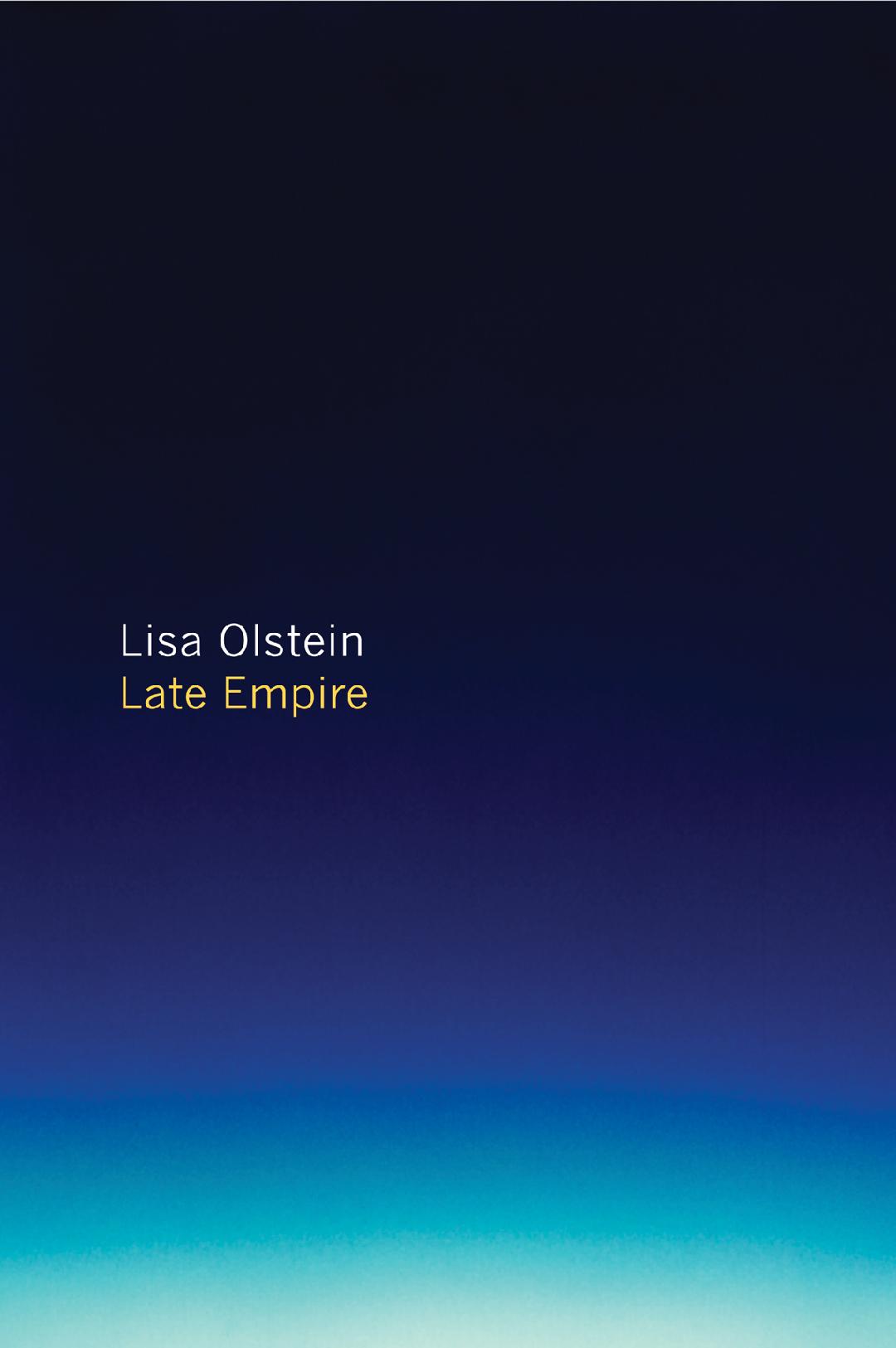 “This is exactly what Empire wants you to do,” says the “almost friend” in the middle of Lisa Olstein’s Late Empire, “sit around crying or sit around writing, playing the small-time artist-agitator role” (52). The observation wryly calls out the poet-speaker and probably half of her audience—she has been driving around crying, cataloging the features in the American landscape she inhabits, which is to say, the topography of American disaster:

A golf course, a prison, a wastewater treatment plant, six gas stations, a dollar store, a BBQ-Beer-Barbershop, two Baptist churches, one megachurch with a neon sign….a Quaker meeting house, a women’s and children’s shelter, which I don’t think is supposed to have a sign…and dozens of brittle lawns are what I drive by on my way to and from each day, Whistle, lately crying. (“Essay Means To Try” 52)

The poet and the empire are on the brink of collapse, and recording the social and psychological terrain is part of an effort to cope and comprehend: “A time of catastrophe provides an opportunity for the acceleration of spiritual growth, is one take on the matter. That fear isn’t only an echo from the past but the future calling, is another” (42). The future is calling in its most embodied form in Whistle, child or ephebe, the intimate other to whom these prose poems are addressed—the one in need of protection and instruction, and the one who stands to suffer the effects of the disaster. Late Empire’s central preoccupation is space—what it means to occupy and inhabit the landscape, what it means to reckon with its degradation, and what alternatives there might be to the imperial impulse that undergirds it all: “It’s impossible not to feel thirsty, Whistle, under a sky like this” (39).

That thirst drives both a colonialist fantasy and a poetic mode that is hard for an American poet, whatever her intentions, to escape. Olstein’s book is tangled in and resistant to the ideological imperative in Charles Olson’s opening declaration in Call Me Ishmael: “I take SPACE to be the central fact to man born in America, from Folsom cave to now. I spell it large because it comes large here. Large, and without mercy. It is geography at bottom, a hell of wide land from the beginning. That made the first American story (Parkman’s): exploration.” It’s all there in Olson’s assertion, the whole disaster: a primitivistic nod to archeology of pre-European origins, an egregious “first” that obfuscates the facts of conquest and genocide, a generalized masculine pronoun. This rhetoric, informing and deforming a poetics of landscape, springs from and feeds the idea of American space as blank slate. In 2018, when reactionary factions declare themselves “settlers” in contradistinction to “immigrants,” it is rhetoric that is far from obsolete. Olstein’s book asks how—how on earth, this late in an empire that has done irreparable harm—a poet can manage to write what she sees out there in a merciless space indeed.

Olstein doesn’t answer, but she goes at the problem from several angles. One is the flip and fuck-you ethos of “Pioneer Me,” whose title suggests both an imperative invitation, as in “ravish me,” and also an adjectival identity, the residual pioneer-poet version of the self: “Welcome to the museum,” the poem opens, sardonically, “Did you come after work / on poor middle-class / half-priced half-an-hour night?” (86). Indicting the institution of cultural enshrinement carries the speaker nonetheless to the eros of a romanticized landscape: “Let me undress you down to / the plainest beige sail you / become, something hovering like / the meadow above the meadow….” (86). She cannot escape her beigeness, which is to say, her whiteness, and this tension, this inheritance, colors her perceptions of the world: “no more June, there’s something / blue-hued and sinking now / beneath the skin, endlessly pinned, / a river returning” (86).

“Charismatic Megafauna” encapsulates this tension. Bearing one of Olstein’s pithy titles that are almost poems in their own right (others are “People are Hanged Curtains are Hung” and “The Canary’s Job Is to Die”), the poem opens with folk and christological idioms on which the country is founded—“fruit of the vine, fish on / the line, chip on the shoulder, / off the old”—and then lands on this formula:

Echoing John Donne, Olstein captures the foundational divides of the imperial landscape: uncultivated pasture versus industrial pavement, agricultural measure versus processed sustenance (for pets, no less), and wild creature versus urge to confine, frame, define. This poem is another fly-by, this time a lightning tour from cops to Caesar to Circe to the zoo, and it comes to a halt with the Adamic act of naming. We care about what we name, she suggests, but then we also feel like we own it. Olstein holds the dichotomy of nature and nuture in abeyance, even as she acknowledges, a few pages later, how deep the imperial will goes: “We’ve learned / to despise anything invasive, but everyone loves / a winner” (94).

“Space Race,” near the midpoint, is the best poem in the book, an unassuming but hard-hitting essay-poem for an era of ecological crisis. It identifies, in one deft image, the paradox of imperial ambition: “A city being built up, Whistle, looks a lot like a city being torn down—scaffolding and buckets, brick-sewn seams, dust clouds speckling the air” (44). The discursive flow of thought leads seamlessly to an anecdote of a friend “paralyzed in a crash [who] devotes herself to the cause of raising awareness about the small hard or even semisoft objects of daily use that can become deadly projectiles…” The personal crusade, meaningful but arguably futile—“who among us can bring ourselves to batten down every small thing” (44)—prompts the observation that “We have no choice but to pick and choose, Whistle, yet this same equation is what will open our eyes to a lifeless ocean in fifty years…” (45). Olstein leads us inexorably to our late empire rock-and-a-hard-place. To carry on and survive we must face the fact of the lifeless ocean, and other dire facts, and we must also look away: “Instead we take quizzes about our personalities and our character traits, such as which marine animal are you?” (45)

Late Empire is a capacious and anxious collection, as it must be, and it continues to manifest Olstein’s characteristic poetic strengths. Her pliable syntax wends through cognition until it ends up, frequently, in metacognition. Her observing eye, in its efforts to record perception, is keyed to its phenomenological blindspots, even as it alights on zoological curiosities (the migrating eye of a flounder, for example). Formal control of the line constrains a tone that is always on the verge of an outburst of ecopoetic panic (I say that admiringly). The predicament of the post-Romantic nature poet, mired in imperial imagination in spite of herself, presents itself again and again: the last poem sees “the silver bodies of / steel origami jets ashing like lit cigarettes / as they sweep languid across the lapis sky” (93). What does it mean to find beauty and metaphor in the very objects that engender the environmental degradation we lament?

Olstein finds one alternative in Bachelard, whose The Poetics of Space provides a source text for a poem in 11 sections. One possible anti-imperial strategy is the remix—not generating more, not producing, but repurposing, a poetics of recycling. Moreover, for Bachelard, space is intimate, domestic, miniature—not writ large in all caps without mercy. Lowercase “space” leads Olstein to the monosyllabic precision of “…The rote / of the sea, the roar of, the glint” (59) and the recognition of the uncanny and the momentary: “…What / a strange thing it is, fossilized duration” (60). One section’s title, drawn from Bachelard, names this anti-colonial gesture as “The Reverse of the Function of Inhabiting,” and the gesture is gendered: “Housewifely, the housewife awakens / reaping an imaginary field…” (62). This time, imagination of a field makes room for tenderness, nurture not as acculturation but as sustenance and shelter: “For the world is a nest” (65). The sequence, which comprises the fourth of the book’s five sections, unfolds in a minor key, carefully attuned to its linguistic medium and the slippages therein:

Yes and no, open and closed,

outside and inside. Here and there

Banished from the realm, shall we

The relational movement of the deictic “here and there” leads not to an assertion but an interrogative, a question of how to respond to exile from the imperial “realm,” and the option of surrender (“soften”) seems as viable as conflict (“harden”). “Language bears” its meanings, carrying them on the current of thought and also enduring them, and the effect is familiarity, music, conversation: “…. How concrete // everything becomes between parentheses: / a chaplet, a refrain, so much talk.” (71)

Late Empire is a book—and I also say this admiringly—that doesn’t get anywhere. It is resolute in non-resolution, non-teleology. It makes no radical claims, yet proposes shifts in perspective—subtle, human—that reframe awareness of the human position on the planet. It elevates the perspective not of the conqueror but the child who perceives that position in its literal relativity:

says the boy lying still on his mother’s

through space. Technically, the man

lying still on the soft bed of a new

grave is orbiting at an equal pace. (16)

Motion on a scale too large to feel, too large to comprehend with the body, belies the perception of stillness in an individual body, alive or dead. Value inheres not in mastery but vulnerability, a recognition of relativity on a planetary and intimate level. Space leads us back to the nest, and the grave, not beyond it.