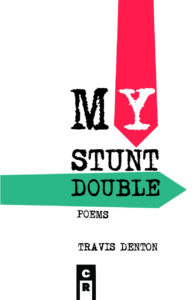 My Stunt Double, by Travis Denton
reviewed by J.G. McClure

Travis Denton’s latest poetry collection, My Stunt Double (C&R Press 2018) shows a poet grappling with what beauty might mean in our science fictional age. The collection’s opening poem, “What Beauty Gives Us,” begins:
When I look up at the red dot in the sky
Grazing left on the elliptical,
A dot among dots among flecks—
Concentric, gathered, lit from the dead
Lamps of the light of other days,
All I can think of is TV news
And a rover tracking its way…

The speaker is drawn toward the old ways of seeing – Mars, that “red dot in the sky,” is part of a vast universe of “dots among flecks.” It’s a cosmos Dante would’ve liked, one in which the celestial spheres turn neatly in their “concentric” grooves and all the stars have been “gathered” meaningfully by someone. They’re not just burning gas but rather “lit from the dead,” full of spiritual significance.

But this vision isn’t sustainable. The stars, we learn, are lit not “from the dead” after all, but from “the dead / Lamps of the light of other days.” Instead of the Paradiso’s “love that moves the sun and stars,” we get only “TV news.” It would be easy to throw up one’s hands here, to fall into the trap of golden-age longing. But Denton refuses that easy nostalgia. What he offers instead is something much more interesting:

And a rover tracking its way,
Making ruts—its slow wheels climb
Dust and ice dunes as it searches
For life I cannot know—
Something with twelve arms,
A row of eyes around what we’d call
A head, I think of its dying,
Of all their dyings—how they could have died
One by one, generations…

The rover, we see, has its own austere beauty, crawling alone among the dunes. And while the speaker starts out treating the possibility of life on Mars flippantly (“something with twelve arms”) his thoughts soon turn to the limits of his own understanding (“what we’d call / a head,” but isn’t, exactly) and toward the things that must unite us: “all their dyings,” just like ours, their world falling to ruin just, we fear, like ours.

Having crossed that empathetic chasm, having stood in the Martian’s dozen-or-so shoes, the speaker begins to see his own world as the distant, impossible thing in the night sky:

…the very last [living alien]
Stands looking out on a greeny-blue dot
Out of reach, yet he reaches, grabs for it,
Each of those arms hurling and knotting
With the others, twisting until he’s tight
In a straight-jacket of arms,
Having looked up to find he’s the last
Standing—the last trudging prince
Around the plain, the one to see
The light yellow and thin.

And it’s here that Denton’s speaker finds a last, strange beauty, one that’s both doomed and defiant, lonely and connected:

There’s no freedom here, no untangling of the arms. This “trudging prince” is still the last one alive on Mars, and there’s no reason to think our world will fare any better than his. And yet, like our earthbound speaker, he keeps looking out into the night sky and “won’t lie down.”

We see this tightrope walk between hope and nihilism throughout My Stunt Double. Take, for instance, “What the Satellite Saw,” which begins:

Floating on a wave of anti-gravity, it beams
A cloud six-hundred miles across
With an eye staring back into space,
Unearthly Cyclops…

The poem opens in high-poetic fashion, complete with an epithet as grandiose as “Great Cyclops.” But as in “What Beauty Gives Us,” that tone can’t be sustained and soon deflates:

Has crawled back from the beach,
Boats ebb on a sandy pudding,
And the rain falls sideways.
Amid boil warnings, we stew

Our nouns and verbs into simple sentences
By candlelight. If this is the apocalypse
And the zombies toddle out near dusk,
We’ll be there like empty grocery store shelves,

Canned goods burrowed out the sliding doors,
Our hearts like batteries. We brush our teeth
In bottled water as the water on the street rises,
And the storm surge in all of us

In all its holy ghostiness pronounces us alive
As we Google what to make with the hail
The storm left—ice cream?

The end of the world is, it turns out, faintly ridiculous. And yet, for all that, there is a certain beauty in it, worthy of praise: “Praise the dark—the street lights out, / The moon out, no planes overhead…” When the poem’s “you” finally touches the speaker’s face and says “Happy apocalypse, baby, / Happy apocalypse, this is all we get,” it’s at once bleak and defiant: maybe all we get is this bathetic Armageddon, but we’ll find something in it worth celebrating.

Such little triumphs in My Stunt Double are fleeting, provisional, and always double-edged, as in “The Spiders in My House”:

The spiders in my house wear bells—
Little ones so I know when they are near.
Newborns pour out a carol from the chimney.

Black widows and wolfs clang
From the toes of my shoes in the closet,
Kindly letting me know the danger they intend me.

They are soft with fur and some have claws.
They are cats, and we are birds in the yard—

…our truce is a golden mean.
I nap, they range and bring music
From the windowsill, picturing

Our bodies caught in silk—
Empty vessels to be filled.

My Stunt Double’s prevailing mood is one I’d call “pre-apocalyptic”: everything is understood in terms of its calamitous end—which, at least for now, isn’t quite upon us. It’s not a comforting vision, but it’s one that feels true to life as we in the 21st Century live it. Maybe there’s nothing to be done about the spiders; maybe we can’t stop the golden mean of our truce from tipping off balance—but there’s music from the window sill, and it is real.

Bio: J.G. McClure holds an MFA from the University of California – Irvine. His poetry and prose appear widely, including in Gettysburg Review, Green Mountains Review, Birmingham Poetry Review, Nashville Review, The Pinch, The Southern Poetry Anthology, and Best New Poets. He is the author of The Fire Lit & Nearing (Indolent Books 2018) and the translator of the forthcoming Natación/Swimming. A three-time Pushcart Prize nominee, he is a book reviewer for numerous journals and teaches a variety of online writing workshops. More info is available at www.jgmcclure.com.