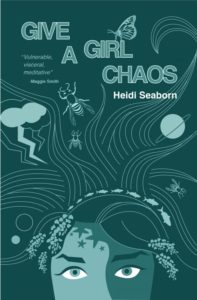 For someone who holds near and dear Nietzsche’s famous adage on chaos and its role as an integral force in the dance of life, you can imagine my delight at the prospect of reading Heidi Seaborn’s debut collection Give a Girl Chaos (see what she can do). Happily, I encountered on its pages a lush poetic choreography of deft and moving lyric-narrative intimations—varied in form, rich in sensual detail, and rife with both harrowing and ecstatic twists of fate, discovery, and human deliberation. Here is a woman unafraid of “[stirring] the hornet’s nest” or “disturbing the murmur of the day”, who plainly states her plan to “stand still, wait out their frantic flight.” Bravo! And so, we enter the epic journey of this mature, worldly woman—sensitive, fierce and vulnerable—coming to terms with the sorrows and triumphs of her myriad stages of experience, artfully told out of sequence, and oftentimes in disrupted flashes of memory. Through her close examination of recollected moments, we ride the untamed existential waves freestyle with Seaborn as formal elements of craft simultaneously help contain, control, and elevate those fluctuating dynamics, just as the body lives through its tumult yet remains, to a degree, stable in space, even if it doesn’t always feel that way. As philosopher and gender theorist Judith Butler suggests: “we’re undone by each other. And if we’re not, we’re missing something.” Not only is there very little that Seaborn—globe-traveler, revered business woman, devoted mother, grieving daughter and sexual assault survivor—hasn’t missed, she clearly prevails as an individual and artist: “a girl who harnesses Chaos/ can whip    winds into a horde/ of butterflies”. Out of confusion, Seaborn mines landscapes where beauty abounds. In the rending of her chaos into poetry that celebrates the senses and proclaims well-earned wisdom, we witness a woman capable of wrangling her own undoing into something vital and life-affirming, even when it is “a dark heart/ roaming/the back alleys of the world”, because, as Judith Butler also said: “One does not always stay intact.” What intrigues in Give a Girl Chaos is how this play between order and disorder dances—in the psyche, the flesh, and the logistical scaffolding of everyday life—and the way those tensions both run amok and fundamentally “organize” the page, ultimately providing meaning for life’s inevitable pains and losses.

Seaborn impresses at the beginning that while chaos takes many forms: “in bottles stashed in the linen closet/ in dreams/ when the lights go out/ and families turn upon themselves” it is also “the way in.” Following the feminist proclamations of poets like Lucille Clifton, Sharon Olds, and of Audre Lorde who said “If I didn’t define myself for myself, I would be crushed into other people’s fantasies for me and eaten alive”, survival begins with the realization that her marriage is no longer viable, her husband an ominous, oppressive “weather” that pervades every facet of their domestic existence:

Even in the kitchen, slicing a peach,
weighted air exudes his weather,

burns the morning’s coffee, scalding
your tongue–now muted by his weather.

Out the window, the sky loses all color
to black, smeared tar of his weather

Seaborn’s repeated use of the word “weather” in alternating lines of this ten couplet Ghazal fosters tension and anxiety in the reader who, like the speaker, feels pummeled by the husband’s relentless “climate” and its gathering assault on body and spirit. Perhaps this barrage of inclement “weather” and the embrace of spirit-pounding chaos offers openings and eventual escape from an untenable situation— the speaker must read the accumulated signs, take in the “percussive […] & thunder [clearing] its throat” and succumb to letting all hell break loose; in short, she must change her life. Once the writing on the wall is heeded, separation ensues. In “How to Run Away” the poet writes:

Take only
that evening and not what followed,
not the days and nights stretched
and burdened by grief’s tonnage.

Disappear into the land,[…]

thus heralding a shedding of material past alongside her disbursement of self—both necessary actions for flight and personal reinvention. The speaker seems ready for critical shifts that lead to nourishing a more authentic voice and self, actions that entail travel through foreign lands before and behind her, and all the buried images those physical places possess: “Poetica written down my naked arms,/ I sip espresso with ghosts in cafe bars.” Artfully, Seaborn constructs this next section in postcard form—arrested clips collected along her more immediate as well as deep past. We find the world traveler, poet, and individuating woman scattered to the winds, the envisioned past captured and held in a picture postcard, real or imagined. Here chaos and order come delivered in a very different kind of package. Without the inclusion of actual postcard visuals, the reader is challenged to imagine what each glossy frame might have held; and so, Seaborn sets herself the task of using language to describe terrain and human drama in each tableau. In “Earthquake”, dated 1979 and set in Dubrovnik, Yugoslavia, we learn that “wine from a shop runs/ down a sloping street/ to the Adriatic/ splintered glass/ a boy crying/ his body quiets with my hold/ aftershocks rumble for half a century”. With such a range of dates (from the 1970’s to well into the second millennium) and locations (Western & Eastern Europe, the Middle East and Asia), one might imagine these to be “fabricated” postcards, providing another layer of disruption for the reader to enter with the poet. Similarly, play with chronological juxtaposition, as in the first piece: “Crossing the Dead Sea”, promotes contrast that mirrors the situations exterior and interior to the speaker. One snapshot (West Bank, Israel, 1979) rides alongside another (Rift Valley, Jordan, 2007). While the former suggests a wandering innocence: “I thought I could walk/ from Jerusalem to Eilat” and is ripe with sensory detail: “I float like the dead,/ lick salt crust off my arms”, its counterpoint suggests a starker, more mature reality the politically conscious Seaborn has lived long and hard into: “The Dead Sea washes/ mud away, decades of mud,/leaving camps hemmed/ with barbed wire/ pinning the Iraqi border.” The sea’s abyss envelops Seaborn, and then she sheds it, perilous war and lawlessness ever present on the horizon. In more ways than one, she has risked much and “crossed a border coming here.”

Interestingly, the following section jumps to the way, way back of Seaborn’s past as she recollects the sensual delicacies of her Seattle childhood: “I could watch/ the sailboats kite across the lake, spy/ on the neighbors as they barbecued, disappear/ into the leaves”, its innocent pleasures as well as unforeseen cruelties, a choice I found compelling for both content and structural reasons. As for form, the decision to scatter herself across time and continents in the previous segment and then home in on early formative, psychological nitty-gritty in the next makes sense to me. Perhaps self-effacement, erasure, disbursement, and destruction of former identities opens one up to rebirth, reinvention, and a “lost” but yearned-for authentic self. In such territory, confrontation with the darker corners of recalled experience in reclaiming buried light elicits the most brilliant work. Such is the case with Give a Girl Chaos, in particular, the standout longer poems, “Crash” and “Tuesday.” Here, Seaborn recounts two pivotal experiences: a devastating family auto accident and her harrowing sexual assault, both deftly illustrated in fractured, glimpsed time-lapse images that will feel excruciatingly accurate to anyone who’s ever attempted to retrieve memories from traumatic incidents. What often remains is a strange kaleidoscope of impressions, from random shapes and smells branded in the synapses, to an abyss-like physical disorientation akin to drowning. From “Tuesday”:

a girl
scout squeezing
her brakes  gliding   her bike to rest
asking,
do you need help?

I don’t remember
his voice
as if he were drowning

Chaos disrupts, and so the human response is to endure the churning moments, days, months, and years that follow. Suppression becomes a survival method that marks the body and psyche, little tombs of the buried self that must eventually be exhumed. By locating points of past suffering and acknowledging their felt presence in body, mind, and memory, and then poetically tracing subsequent behaviors that developed over time, Seaborn establishes both her process of personal reconstruction and the order that comes through writing, even as this simultaneously requires a state of undoing. By generously offering up her map of survival, replete with breathtaking lines of tribute to her children and deceased father in the final sections: “My heart’s adrift on that current/or maybe it’s the rock crab scuttling/ sideways along the sea floor searching”, Give a Girl Chaos triumphs as a glorious display of its author’s ability to wield mayhem and sorrow in a manner that brings to mind Borges’ tenet: “All that happens to us, including our humiliations, our misfortunes, our embarrassments, all is given to us as raw material, as clay, so that we may shape our art.” Lucky for us, we get to see just what Seaborn can do.

Michelle Bitting won the 2018 Fischer Poetry Prize, Quarter After Eight’s 2018 Robert J. DeMott Short Prose Contest, and a fourth collection of poetry, Broken Kingdom won the 2018 Catamaran Prize and was named to Kirkus Reviews’ Best of 2018. Her third collection is The Couple Who Fell to Earth (C & R Press), named to Kirkus Reviews’ Best of 2016. She has poems published in The American Poetry Review, Narrative, The New York Times, The Los Angeles Review, Vinyl Poetry, Plume, Love’s Executive Order, Thrush, Raleigh Review, the Paris-American, AJP, Green Mountains Review, and others. Poems have appeared on Poetry Daily and Verse Daily, have been nominated for Pushcart and Best of the Net prizes, (including Pushcart 2018 and Best of the Net 2018) and recently, The Pablo Neruda, American Literary Review and Tupelo Quarterly poetry contests. She holds an MFA in Poetry from Pacific University, Oregon, and an MA and PhD in Mythological Studies with an emphasis in Depth Psychology from Pacifica Graduate Institute. Michelle is a Lecturer in Poetry and Creative Writing Studies at Loyola Marymount University www.michellebitting.com