Review of Pussy: Poems About Things You Think Are Pornographic by Maria Garcia Teutsch 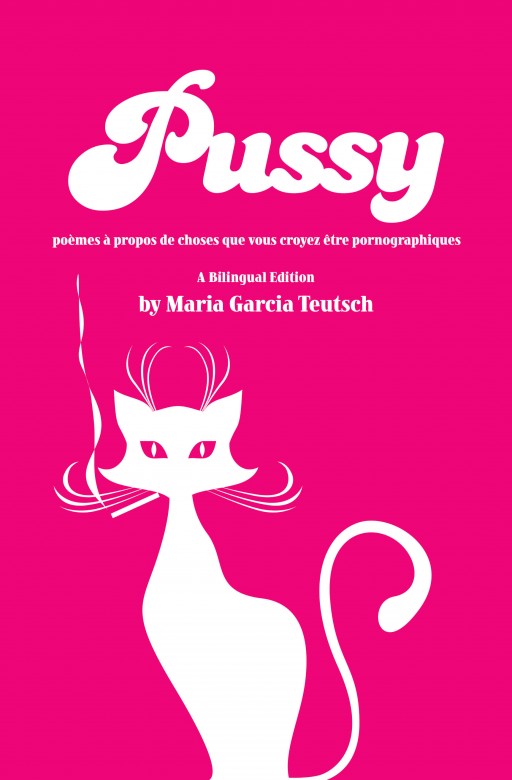 What does “Pussy” mean? On the playground, it means wimp; in the bedroom, it means female genitalia. But to many feminists and women who ground their work in a sense of pride about the female body, “pussy” is a call to arms, an in-your-face riot-grrl exclamation about purely bad-ass female experience.

Maria Garcia Teutsch’s Pussy: Poems About Things You Think are Pornographic, (Henry Miller Memorial Library 2014) uses the idea of the feminine “pussy” and the female self to sculpt carefully, wildly, delicately made poems that make both being a woman and having a voice a kind of resistance and kind of opening, a kind of violence, and a kind of seduction. Many of these poems have a physicality that evokes a sense of touch. These poems often use at their foundation sexual acts, but then use that base to build images that make the sexual seem to encompass all of the human and natural world. In this way, Teutsch’s poems remake the sensual into the universal.

This approach transforms the idea of the physical body, especially the physical female body, into something much more profound. In Teutsch’s poem, “Gold Coins in a Suitcase on a Train,” she begins with “the blind cunt of light” and then, later on, repeats that line. This light source seems to be coming from outside the narrator, and yet it is somehow part of the narrator as well.

In other poems, she echoes this pattern; the natural world, the human world, and the human body all merge and overlap. In “My Wide Divide,” Teutsch writes at the very beginning: “Enter the choir of noises: flap of wings,/highway is like waves lapping except for a horn now and then,//a truck backing up the chickadee’s song: long, short, short, long—/ like god’s smacking tongue.// God is the smell of lemons mixed with the steam from roof tiles” (5). By naming this poem, “My Wide Divide”, Teutsch is again referencing the female body – the “divide” she mentions can easily be seen as a woman’s “split” between her legs – so the poem that follows the title can be read as happening “in” this divide or split. In other words, all the noises, technology, animals, gods and smells of the world are happening in the narrator’s body, and, more specifically, in her female parts.

A new issue of this chapbook has been translated into French and in this language, especially, the collection serves as a reminder of the earthy power unleashed by the sexual revolution, which emerged around the time Henry Miller was gaining popularity in the U.S. The sensuality of this text fits very well into the sensual European tradition that Miller exploited and enjoyed himself. With beautiful, strange and unique images, structures and language, Teutsch’s poems are mini-manifestos of feminine experience and feminine power.

Christine Hamm is the author of 3 books of poetry, Echo Park, came out from Blazevox in the fall of 2011. Erbacce Press of the UK published her chapbook, My Western, in 2012 when Christine was a finalist in their annual poetry contest.  New Orleans Review will publish Christine’s chapbook, A is for Absence, in 2014.