Review of Bay of Angels by Diane Wakoski 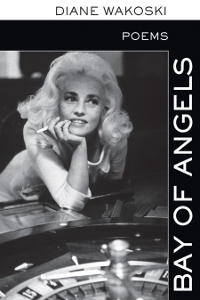 Before Betty Friedan, before the pill, Diane Wakoski wrote about what other girls only whispered to their best friends: sex, rebellion, unwed mothers, freedom, and equality.

So many lovers for this girl
with long black stockings and Alice in Wonderland hair
… I thought of myself then/as a knight questing for love
… I might see the Grail,
hovering
shimmering
over each man
tattoed or leathered or
wearing motorcycle boots.

A heroine to women, she grew up in Whittier, California, in what she once described as “a shack next to an orange grove.” It is the birthplace of her idiosyncratic personal myths, woven from weedy chaparral. From there, she moved to the blooming plum trees and green hills of Berkeley.

Within the third section of Bay of Angels, entitled “The Lady of Light Meets the Shadow Boy,” the poem “Marilyn Gives Me a White Fleshed Peach” captures how, in the land New Yorkers view as a cultural desert, Wakoski remains proof that poetry lives in our groves, our irises and poppies, our oceans and hills:

My sister always offers me fruit of the season
– this May it was white peaches
whose skin peeled away and left me
with scented flesh that tasted like moonlight,
cool, singular, almost transparent,
a goddess food.

In an age when young women were supposed to be demure and undemanding, Wakoski kept saying, “I want, I want,” always in a conversational style that has, in her newest books, perfected the colloquial tone William Carlos Williams brought to poetry. Each new poem in Bay of Angels is an intimate, secret-shedding letter—and each takes place in a self-contained universe. The result creates a tapestry that rivals the richness of a novel. From the poem “Wanting to Wear His Tweed Jacket”:

… I
wanted him in every
landscape. But he led me,
he led me to the oceans of wheat, the
battlefields of wheat, the plains where
no Sappho ever lived or sung.

Always grounded in a certain place and time, these poems take flight. The first section, “Celluloid Dreams,” is named after some of her favorite movies, including, Jacques Demy’s La Baie des Anges and David Lynch’s Mulholland Drive. Like those films, her images dazzle.

A sailor’s daughter without a silver compass,
charting a course,
navigating the movie screen,
I have looked for mariners all my life,
trying to find my father.

Early in her career, Wakoski gave herself permission to be the “mythic Diane, rewriting her life in poetry, sometimes surreal and abstract, other times being the everyday woman in a supermarket.” In “‘The Spiral Staircase:’ Oranges vs. Apples,” she spies her younger self.

In the same poem, she describes her childhood home:

the house where the piano sat
upright like an old maid
at a dance.

Just as she has for more than six decades now,she continues creating her own personal mythology: an ex-lover is the Motorcycle Betrayer; she is a shape-shifter, identifying with Diana the Huntress and the phases of the moon; the Diamond Dog tracks her lost father. She even created a twin brother, David, the lost boy who keeps her company. Casting myth into an everyday reality, she can, with her “California eyes,” watch as “Persephone Steps Off the Elevator at the Fourth Floor”:

and emerges again onto the adobe walled landing,
the Southern California horizon wide as an avalanche …

In the introduction, Wakoski notes that “The Bay of Angels, of course, is a place, but to me it’s where I’d like to drown, with angels all around me, holding cards and offering me poker chips, should I ever have to die that way.”

The three sections of this collection provide room for this 75-year-old to long for sex, for love, for her father, for glamour, for winnings at the gambling table. These new poems are juicy with a love of music, food, sex, butterflies, birds, pop culture, highbrow literature, travel, friends and family.

“Each poem has a secret,” she has said in the past, “and a problem that must be solved.”

Of the 41 poems in Bay of Angels, some of the most endearing are dedicated to Mathew Dickman, the brilliant young poet she addresses as “Pizza Boy” and “Shadow Boy.” From “Goldfish Narratives”:

Boyish face, cowlick in his shiny
hair, hand placed on my arm so as not
to startle me when
he creeps up in the skate arena to
say, “hello, Diane.” Not the boy
who killed his sister’s goldfish,
not father,
not brother. I give him
the role of Winter’s Champion, bashing
at the memory – his and mine – of mistaken
violences.

Celebrated for his own imagery, his shrewd observations and a fearless, touching vulnerability, Dickman introduced Wakoski, the guest lecturer at the poetry festival in Idyllwild, California this summer wearing an “I Love Wakoski” t-shirt. It was an echo: Back in the 60s, when women of her generation were fighting for their rights, Wakoski’s poems told them they weren’t alone.

The t-shirt also carries a new promise. Every day now, when old, white men seem intent on turning back the clock to take women’s hard-won rights away, that t-shirt—and this book—keep fueling the courage to say, “Quiet down, boys. We’re working here.”

In one of the final poems in this collection, “Reinventing the Measure,” the links between eras and places, myths and realities, illustrate how Bay of Angels equals the stature of the American original who is Diane Wakoski:

we do both live in the same place, near a great ocean:
it is called poetry.