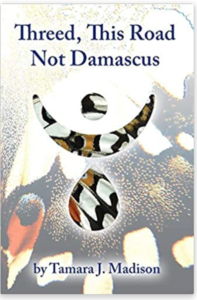 INTERNATIONAL PERFORMER and poet, Tamara J. Madison describes the word “threed” in her new collection, Threed, This Road Not Damascus, as:

(adj.) having the quality of three or a trio of; carrying three breasts (or other appendage) where normally there are two; of or descending from beings of three breasts though the third has dissolved by way of devolution; powerfully compassionate beyond ordinary human behavior.

While “threed” is also described as a noun, “a being carrying three breasts (or another appendage) where normally there are two” or “a kin or descendant of one who is ‘threed’” which happen to be themes that surface throughout the book, the adjective above demonstrates an absence, a breast “dissolved.” From the opening of the book, this notion of dissolution becomes a metaphor for how women are treated as subjects of refusal throughout history. The third breast a metonymic example of a woman as a phantom appendage “powerfully compassionate beyond ordinary human behavior.” Madison’s definition sets a tone of yearning to be seen in a world that constantly erases the past.

Madison’s collection, published in April 2019, comes at a time when US Attorney General, William Barr, distributes a redacted version of the Robert Mueller report. Her book release comes in a time when it is normalized for a president to objectify women openly without repercussion; it comes in an era when society loses inimitable, powerful women like Toni Morrison and Ruth Bader Ginsberg; it comes in a time when George Floyd’s death sparks public outrage during a global pandemic revealing the unanswered violence of racism and slavery that has haunted this country before its inception— and yet Breonna Taylor’s murder remains unsettled from the justice she deserves. This is all to say that Madison has tapped into a use of language crucial to the understanding that humanity is in a state of removal, and a three-breasted woman becomes a symbol for the loss of an appendage, a subtraction.

Each section begins with a confrontation with King James. The poet navigates a mythical landscape in contact with ancestors, family members (her daughter), and historical figures to redeem a state of visibility. In “Rebuttal: Three-Breasted Woman Confronts King James I,” the speaker challenges the epigraph from the book of proverbs, “Who can find a virtual woman? / for her price is far above rubies.” The speaker responds to King James:

The language in italics layers a third speaker in the poem: the voice removed from the body speaking to the narrator and the poet. The voice berates King James by portraying how the transaction of women is unacceptable. One is reminded of Gayle Rubin’s warning from “The Traffic in Women,” “If women are the gifts, then it is men who are the exchange partners.” Madison reveals how religious origin stories remove women as social beings replacing them as objects of desire.

In “Beatitudes: Three-Breasted Woman’s Sermon on the Mount,” the repetition of “blessed” pays homage to biblical verse, while dismantling its reverie of praise in the process with modern language:

Blessed: the siliconic breast, bound and gagged,
stuffed and fluffed, nipples rezoned,
the “might as well go ahead and remove it” breast “because your mother and sister had cancer, and you will probably have cancer too,” the reconstructed breast ballooned,
nipples, areola tattooed.

The “siliconic breast” as an object of a man’s pleasure, becomes a palimpsest of the body rewritten for a man’s gaze, and then redacted to avoid cancer. The use of high language is how the speaker redefines the creation story, and uses the act of removal as a defense mechanism against death.

In “Focus: Poet Studies Three-Breasted Woman,” the poet examines the body of her ancestor: “I see her more clearly now. / Her skin, like the seasons changes.” There is a conflation of the Three- Breasted Woman and the poet in this poem, which together amplify a much more powerful voice against King James. The following poems demonstrate an attack against the biblical figure. In

God bleeds
through rivers and trees,
feathers, furs, and scales, concrete,
shimmers among the least of crystals. Perhaps you kill because you cannot find your god
staring back in the mirror, or do you kill
because you see God when gazing at
me?

Madison’s investigation of the King James Bible through the voice of a devolved body is an imaginative and academic exploration through a lens of exclusion. This collection reminds humanity of a world in flux, in constant dissolution, and how through excavation of historical texts, one can run parallels between a world that condemns women to a world that has declared “It’s Eve’s fault.”