I first came across Danielle Boodoo-Fortuné’s work during undergrad in a slim volume published by University of the West Indies (St. Augustine). The work gathered there had been some of the best work coming out of a creative writing course that the Department of Literatures in English offered. There were many talented writers in there, but now thinking back, the only one I remember is Danielle Boodoo-Fortuné. This would have been around 2009/2010. Since then, I have come across her work here and there in different publications with the most extensive exposure to the work coming at a reading we did together in Brooklyn, a reading organised and sponsored by the Bocas Lit Fest. Almost ten years after that initial encounter, I am reading her début collection, Doe Songs (Peepal Tree Press, 2018), a work that is assured, accomplished and bearing a fierce and uncommon command of its gift. The voices in Doe Songs — for there are many — earn the authority that they so amply possess.

Boodoo-Fortuné’s work, while articulating their conflicts, must concomitantly build the world within which these conflicts transpire. And the worlds are conflicted worlds. Unfamiliar worlds. The personae are human in some cases, in others animals, and in several chimeric, and quite often, the point is that the human itself is always a chimera— that within the human form is contained the feral and the civic consciousness, and a complex divinity.

There is music in the forest,
a word I heard the bush tell….

They say once you hear it,
you lay yourself down
beneath the trees,
and the fawn is the one
walking home
in your skin. ( ’Doe’, 12)

The truths or embattled ground it presents are as much human lessons and human problems as they are problems of the entire universe. There is no stable ontological or moral border between the human and the nonhuman, or inhuman, for that matter.

This is the root of Boodoo-Fortuné’s worlds. Making such worlds places an extra burden on words that seems suggestive of a more primal relationship to the word— when words were expected to create worlds, or, chanted correctly, change them radically. A kind of magical version of the social function demanded of poetry at other, later periods. This does not result in syllabic indulgence, or an affected rotundity or sanctimony. Quite the opposite, the words remain simple, surgical even. The diction is incisive, spare and functional as a scalpel, as the hunter’s searching blade:

But once I drew the blade
against her side, I knew.
It was still warm, breathing
deep inside the half-moon
of her open belly.
“Leave it”, someone said,
But I couldn’t. I feared
the darkness would swallow me,
that the sighing trees
would remember my face (‘Doe’, 10)

The difficult beauty of Danielle’s work resides as much in the texture of the words, as in the images they conjure, and each seem to threaten —though they never overwhelm— each other. Beauty remains, and resides alongside the commonplaceness of the grim, the wild. Boodoo-Fortuné’s sense of beauty, her aesthetic, is always feral without any undue morbidity or undue simplification of the Wild into gore and ferocity. Nor is it used as a conceit of some faux-radicalism. Where images are grim or there is some element of gore, these are organic, these are part of the world, and part of the Word that gives birth to and is indeed, the World. And because they are mundane, because she succeeds in getting us to accept this as not just her world, but ours, the beauty of the poems leap out at us, and surprise us even as they trouble us:

it was you who broke my heart
that night, you with your small hands
made for holding on too long.
You didn’t even make a sound
when, startled by its aloneness,
the fawn thrashed and split
its skull on the kitchen floor. (‘Doe’, 11)

What are the implications for being ushered into such a world? One is forced to consider the world on its own terms but like an endless pun, an infinite jest, one senses strongly that he is implicated in this reality— that amid those forms of animals, animal-Gods, protean life, chimeras and so forth, one must find himself, one must find man. Amid the jarring imbrications of one category of life upon another, we— animals, Gods, couchant humanoids— create each other:

The Heron god created daughter
on the last day. Not knowing
what to do with the longing
left over from creation, he poured it
into her open mouth, still warm
and echoing with earth. (‘To Enter My Mother’s House’, 7)

One persona whose father is pictured as a grouper utters “Here is no place for the living” while ostensibly under water; another utters, “Here is no land for wild beasts” while in a taxi— a persona who is suppressing what is in fact the inexorable urge to howl that characterises all creation.

Yes. This is us. Family threatening to consume each other, a taut, fraught atmosphere in the house:

There is a lit fuse
in your daughter’s mouth,
her brownish body a bomb
set down, soft and waiting
to make war with your name. (’Your Daughter is Trouble’, 53)

This is us, when even being good is not enough:

The hunters come with their guns
even though we are good.
Go on and run, I whisper
and her soft hooves fly. (‘Dream of My Daughter as a Fawn’, 13 )

Boodoo-Fortuné estranges us, purposely alienates us, but all the more so because hers is a world we think we know. It is the natural world we have excavated and have come to know ‘so well’, or maybe our world, the civilized world. For there are fathers, but they are groupers or some other animal, and their daughters wait by their sickbeds lovingly, with boning knives. There are riverine Gods, and Gods who first borns must be hidden from as one hides from a devil with whom one has made a pact she cannot keep:

To keep you, I shrink
so that God will not find me
I hide my heart
in the birdseed and the boiling-pots (‘The Fifth Month’, 32)

There are gravid snakes who want to be complimented by their lovers as snakes, interpolated among poems with pregnant women:

Tell me I am beautiful and cold.
I will tell you how thirsty I am
for a mouthful of light. (‘Boa Gravida’, 27)

Throughout the book, we meet family connections, blood-relations that are as prone to spilling each other’s blood as to preserving and cherishing the connections therein. There is the fear of lost connection as an elder departs and a young one enters the earth, crossing each other’s paths in some shadowy, liminal region. (Note here Boodoo-Fortuné’s sensitivity to the cadence in the word sombra, turning its sonic exasperation, its sound of releasing load, into a “resting space”):

Oh grandfather,
will you know each other
In the way that roots reach out
dreaming in the earth’s deep sleep,
or meet in the middle of the bridge,
the endless, the sombra, resting space
between shadows? (‘Sombra’, 31)

What further estranges the reader, is that none of the personae are talking to him or very few of them. One is deservedly relegated to watching and having none of his burning questions about where he is, answered. But what lays before one powerfully compels him to watch. By three quarter way into the book, one gains some familiarity with the timbre of these untamed and protean voices, and craves to hear the voices outside of this world, or perhaps greater variety in pitch. The poem ‘Chameleon’ seems to provide this and intimates the scope of Boodoo- Fortune’s style, and the beautiful poem (high among my many favourites), ‘Doe’, at the beginning of the book. That said, the poem, ‘Reader, Beware’, though it is different from the others, seems out-of-place somewhat in the collection. That poem seems to verge somewhat on what Boodoo-Fortune’s has thankfully avoided, which is a swaggering boast in savage, gratuitously gory metaphors, metaphors that within the world she has surrounded the reader with, never seem conceits serving some political programme or propaganda, never seem vainglorious or ostentatious or anything less than native. The danger of the ostranenie technique or effect, is that it could appear guilty of indulgence and self-congratulation in its own strangeness, gaucheness or menace; in some corners of literary production of late, even appearing as a kind of style. Boodoo-Fortuné seems to have evaded this completely. She is fuelled by something more profound.

Another poem, the last in the book provides the variety in pitch one saw in poems like ‘Chameleon’ and ‘Doe’, a persona, attempting to find her gone Grandmother in the places she had been:

There is a door that leads
down a broken hill. Trees grow there,
but are dark, burdened with moss
and too much hunger.
If she walked here, with her dogs
barefoot and half-blind, then
I might still find her.
If I go mad, like she did,
I wonder if you will stay. ( ’Five Songs for Petra’, 77)

Doe Songs is a striking and accomplished debut by a tremendously gifted poet. Its greatest attraction is the equanimous voice(s) leading us through unfamiliar territory. It manages to resist the peculiar temptations associated with its choices and style, and also manages to give us a strong sense of its possibilities. For me personally, the book is timely. For the bracing realisation in Boodoo-Fortuné’s thickly forested civilisation, her hinterland habitations, is that whatever their “creaturely form” manifested in words, the figures that people her book are human. Here, human, in the broadest possible sense. Existence in the broadest, most untrammelled sense— which may be the best way to conceive of both, as often as possible. And especially, now. 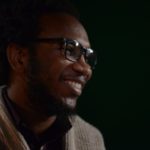 Vladimir Lucien is a writer and critic from St. Lucia. His debut book of poems, Sounding Ground won the 2015 OCM Bocas Prize for Caribbean Literature.