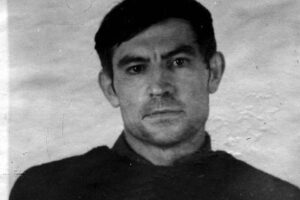 VASYL STUS (1938–1985) was a poet, translator, and literary critic, widely regarded as one of the foremost authors in the Ukrainian language. He is renowned for his acutely tragic philosophical poems, complex imagery, and frequent use of rare words and self-invented neologisms. Although very few of his literary works dealt with political issues, he was repressed for his support of the Ukrainian dissident movement and for his criticism of the Soviet Union’s colonial Russianization policies that sought to eliminate the national identity of Ukrainians. Stus spent many years of his life in detention. The KGB often confiscated the manuscripts of his—mostly nonpolitical—poems and translations (including Rilke, Goethe, and Kipling), many of which were destroyed and lost to posterity.

In 1972, Stus was sentenced to five years of imprisonment and three years of exile. He served his sentence in Russia: in Mordovian forced labor camps and in a village in the Magadan oblast. In 1979, Stus returned to Kyiv, but in 1980, he was arrested again. During a surreal sham trial, his young “defender” Viktor Medvedchuk, who was appointed against his will, did nothing to actually defend him and stated before the court, “All of Stus’s crimes deserve punishment.” (Later, Medvedchuk became an influential pro-Russian figure in Ukrainian politics and one of the country’s richest oligarchs.) Stus received ten years of imprisonment and five years of exile for “anti-Soviet activity” and was transported to a forced labor camp in the Perm oblast, Russia. He declared hunger strikes several times. In 1983, Stus was put into solitary confinement for a year. Heinrich Böll and other Western writers urged the Soviet regime to free the poet, but all of their letters remained unanswered. In September 1985, after a week in a cold, unheated punishment cell, Vasyl Stus died, under unclear circumstances. He was buried in the territory of his prison camp. The KGB apparently destroyed the manuscript of Stus’s collection Soul Bird, written during his second imprisonment. The book included hundreds of poems and translations. However, researchers allow the possibility that the manuscript might still exist.

Vasyl Stus authored six poetry collections, five of which have survived. Although Stus’s work was banned in the Soviet Union, the Ukrainian diaspora in Belgium and the United States published two books of his verse during his lifetime: Winter Trees in 1970 and A Candle in a Mirror in 1977.

At the end of the 1980s, during perestroika in the Soviet Union, relative freedom of speech was established, leading to the rise of the Ukrainian independence movement. In 1989, the remains of Vasyl Stus and two other dissidents, Oleksa Tykhy and Yuri Lytvyn, were reburied in Kyiv in a ceremony attended by 30,000 people. Following the collapse of the USSR and the restoration of Ukraine’s independence in 1991, numerous books of Stus’s poetry were published in his country, including a four-volume scholarly edition. The Donetsk National University and dozens of streets all over Ukraine are named in Vasyl Stus’s honor. His poems are required reading in all Ukrainian schools and are widely studied at universities.

“A Stranger Lives My Life and Wears My Body” is one of Stus’s most famous poems.