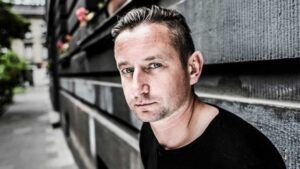 SERHIY ZHADAN was born in Starobilsk, Luhansk oblast, in 1974. He is a Ukrainian poet, fiction writer, essayist, and translator. He has pub­lished over two dozen books, including the poetry collections Psyche­delic Stories of Fighting and Other Bullshit (2000), Ballads of the War and Reconstruction (2000), The History of Culture at the Beginning of the Century (2003), Lili Marlen (2009), and Life of Maria (2016). His nov­els and collections of short stories include Big Mac (2003), Anarchy in the UKR (2005), Anthem of Democratic Youth (2006), and Mesopotamia (2014). The English translations of Zhadan’s work include Depeche Mode (Glago­slav Publications, 2013), Voroshilovgrad (Deep Vellum Publishing, 2016) and Life of Maria and Other Poems (forthcoming with Yale University Press in 2017). Other translations of his work appeared in PEN Atlas, Eleven Eleven, Mad Hatters Review, Absinthe, International Poetry Review, and the anthologies New European Poets (2008) and Best European Fiction (2010). In 2014, he received the Ukrainian BBC’s Book of the Decade Award, and he won the BBC Ukrainian Service Book of the Year Award in 2006 and again in 2010. He is the recipient of the Hubert Burda Prize for Young Poets (Austria, 2006), the Jan Michalski Prize for Literature (Switzerland, 2014), and the Angelus Central European Literature Award (Poland, 2015). Zhadan lives in Kharkiv, Ukraine.