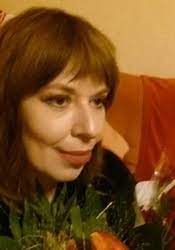 LYUDMYLA KHERSONSKA was born in Tiraspol, Moldova, in 1964. She is the author of two books of poetry, Vse svoi, named one of the ten best poetry books of 2011, and Tyl’naia-litsevaia (2015). Her work has received sev­eral literary awards, and she has been named laureate and winner of the Voloshin competition. Her poems appear in many journals, including Novyi Mir, Znamia, Kreshchatik, Interpoeziia, and Storony sveta, and have been translated into Ukrainian, Lithuanian, and German. She gave poetry readings in Moscow, Kyiv, Lviv, Munich, and New York. Kherson­ska also translates English-language poets into Russian, including Vladimir Nabokov and Seamus Heaney. She has spoken about Rus­sia’s war in Ukraine and read her poetry about the war several times on Radio Liberty. Her latest book, Tyl’naia-litsevaia, includes poetic reflections on Russian aggression in Ukraine. Khersonska lives in Odessa.