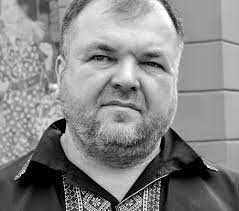 BORYS HUMENYUK was born in Ostriv, Ternopil oblast, in 1965. He is a poet, writer, and journalist. He has taken an active part in Ukraine’s Revolution of Dignity of 2013. Since 2014, he has been involved in the anti-terrorist operation in the Ukrainian Donbas region. He now serves in a self-organized military unit composed mainly of volunteers.