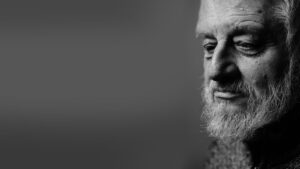 BORIS KHERSONSKY was born in Chernivtsi in 1950. He studied medicine in Ivano-Frankivsk and Odessa. He initially worked as a neurologist, before becoming a psychologist and psychiatrist at the Odessa regional psychiatric hospital. In 1996 Khersonsky took on an appoint­ment at the department of psychology at Odessa National Univer­sity, before becoming chair of the department of clinical psychology in 1999. In the Soviet times, Khersonsky was part of the Samizdat movement, which disseminated alternative, nonconformist litera­ture through unofficial channels. Following the collapse of the Soviet Union, Khersonsky came out with seventeen collections of poetry and essays in Russian, and most recently, in Ukrainian. Widely regarded as one of Ukraine’s most prominent Russian-language poets, Kherson­sky was the poet laureate of the Kyiv Laurels Poetry Festival (2008) and the recipient of the Brodsky Stipend (2008), the Jury Special Prize at the Literaris Festival for East European Literature (2010), and the Russian Prize (2011).