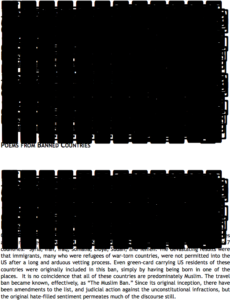 On January 27th of 2017, President Trump issued one of his first major immigration directives as the new President of the United States. The executive order imposed a travel ban on 7 countries: Syria, Iran, Iraq, Somalia, Libya, Sudan, and Yemen. The devastating results were that immigrants, many who were refugees of war-torn countries, were not permitted into the US after a long and arduous vetting process. Even green-card carrying US residents of these countries were originally included in this ban, simply by having being born in one of the places. It is no coincidence that all of these countries are predominately Muslim. The travel ban became known, effectively, as “The Muslim Ban.” Since its original inception, there have been amendments to the list, and judicial action against the unconstitutional infractions, but the original hate-filled sentiment permeates much of the discourse still.

Over the years, Poetry International has featured many poets either from the above countries or who have a deep connection to the countries either through birthright or residency. It is, more than ever, of great importance that we share these works again. Included in this initial feature are Mansur Rajih from Yemen, Warsan Shire born in Kenya of Somali parents, Ghassan Zaqtan, a Palestinian who has spent years in exile in Syria, as well as Gzar Hantoosh, Fawizi Karim, Yousif al-Saigh, Sami Mehdi of Iraq. This portfolio initiates a series of voices associated with the 7 banned countries that will provide a chance to engage with our poetic brothers and sisters and to make sure that they are always welcome here.

Very late at night,
A fear like an echo of a distant call;
“Who’s there?”
I whispered.
But didn’t find anyone home
Nor anyone in the street,
Nothing but the wind singing,
A willow, drunkenly quivering in the dark,
And some stars staring at it from far off,
Twinkling in harmony and peace:
“Is that you?”
I asked.
But no answer came to me,
Except for a touch that troubled me
And a mumbling that frightened me
And I lost all the peace I was after.

A Reader in the Darkness
Fawzi Karim

Before you go to bed you insist on switching the lights off
and double checking, by touch, in the darkness, that you locked the door
and that you pulled down the shades.
You jump like a cat climbing the stairs
and creep into your bed,
and dream –
that the book you were reading at your desk
is being opened again in the darkness:
other fingers turn its pages;
another eye keeps an eternal watch
over the roiling emptiness between the lines . . .

Tonight
the nightmare was very condensed:
a dining table
a bottle of wine
three glasses
and three headless men.

Between the Sultan and His Statue
Yusuf al-Saigh

A wily sculptor
Cut several pounds off the sultan’s figure
And added several pounds to the statue’s.
When day broke,
The people said:
We’ve been taken in!
Of the two bodies on the veranda,
We no longer can tell
Which one is the Statue
And Which is the sultan

My older sister soaps between her legs, her hair
a player of curls. When she was my age, she stole
the neighbor’s husband, burned his name into her skin.
For weeks she smelled of cheap perfume and dying flesh.

It’s 4:00 a.m., and she winks at me, bending over the sink,
her small breasts bruised from sucking.
She smiles, pops her gun before saying—
boys are haram; don’t ever forget that.

Some nights I hear her in her room screaming.
We play surah al baqarah to drown her out.
Anything that leaves her mouth sounds like sex.
Our mother has banned her from saying God’s name.

Do not despair, my friend:
The light that shines on our land
will remain chaste.
We still have time.

Maybe next year, the year after-
it will be enough.
We will see
the new face of Eban

smiling over our lives.
This land is good
and its history teaches us
we must not despair.

This land is happy.
Look, see the girls
painting their cheeks?
This land is continuously giving birth.

Yemen is a happy country,
the people die standing tall.