Memories of a Master Class with Derek Walcott 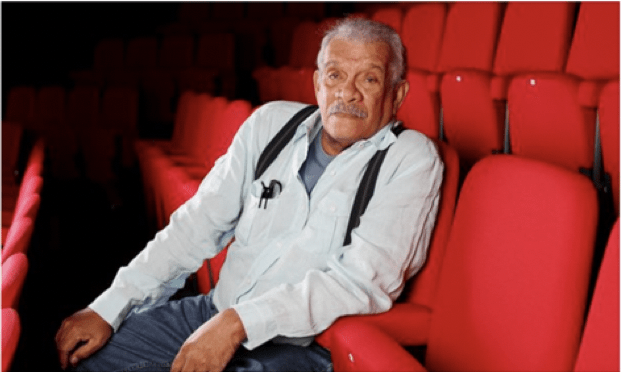 POETRY MASTERCLASSES rarely, if ever, kick-off right on time, so we wouldn’t ordinarily have rushed. But on this particular morning, the eight of us weren’t just on time, we were early. It was 2011 and the day was bright and brittle cold. I may be inventing the details, but I think bright and cold are a safe bet when describing Edmonton in early autumn. Certainly, I remember the energy in the otherwise empty hallway, the anticipation echoing off the brutalist brick walls as we waited outside the University of Alberta classroom. We’d been told to bring some of our own poems to class and, when one of my classmates had asked the course organiser, the luminous poet Bert Almon, whether we ought to bring our best pieces, his reply had been short: ‘I would.’

So there we were, shuffling our papers, imagining what towering, larger-than-life genius would shortly be judging – and, I just knew, dismissing – the poetic masterworks we’d been fine-tuning all summer.

Derek Walcott’s work gives one that impression of him. Even the quieter, delicate poems in White Egrets—which had then just been published—have an enormity to them, a weight of the epic, of and against tradition, pulling and pushing, a sea weight. So, when he arrived accompanied by Bert, walking slowly, almost shuffling, and muttering about the weather, maybe it’s not surprising that my first thought was that he was smaller than I expected.

Which isn’t to say I wasn’t still petrified at the prospect of reading my work in front of him. And he seemed to know it too–and, what’s worse, relish it. After some cursory introductions, we all sat down around the table. As one student gathered her breath to read her first poem aloud, he stopped her with a raised hand before insisting that no one could possibly read a poem sitting down like that–we needed a podium, to stand up and put our voice and body to our poems. And so Bert hustled off to spend what felt like an eternity locating a podium while we sat in shivery silence. By the time a lectern had been sourced and the student finally was able to finish reading her (as I recall it) stunning poem,I think we were all only one small shake from shattering. Derek leaned back thoughtfully at the other end of the room, fingers laced, before saying something like ‘Well, that was awful’. We looked at each other. Seconds ticked by, eons. Then a glint appeared in Derek’s eye and an impish grin seeped across his face. He let out a hoarse laugh. ‘I’m kidding! That was terrific.Now, who’s next?’

I’m not sure how much my memory has embellished, but something in that moment stands for what Derek would come to embody for me. Not as a towering intellect, a genius of poetry and plays, but as a human being. Of course, he was a towering intellect. I recall him once singling out the word “still” in a poem for being “too tall.” Once the astonishment wore off—I’d never considered the visual aspect of a word before—I realized he was absolutely right. He could also be uncompromising, exacting, even to a fault. He would frequently interrupt as we read our poems.I remember him cutting someone off mid-recitation saying, “You’ve been reading those Beat poets, haven’t you? I hate that kind of thing.” A favorite saying of his was “the beauty of the verse is how hard you are on yourself.” I guess we weren’t being hard enough, so he felt he had to step up in our place.But there was behind it a sense that his strictness, his meticulousness, was how he treated his own writing. We were with him in his mind, his process, gathered together around the fire.

Memorization and recitation of poems was a central feature of our classes. I think I could still rattle off (but please don’t test me!) Auden’s “The Fall of Rome,” with its “herds of reindeer” moving “silently, and very fast,” or Edward Thomas’s “The Owl.” I remember us students joking that anyone walking by the classroom would think we were some cult or coven casting spells as rhythmically and in unison we would chant, “…for all who lay under the stars, / Soldiers and poor, unable to rejoice.” That spell would be quickly broken, however, as Derek would turn to us, unable to contain a smile, “…unable to read Joyce!” And he would roar with laughter. Silly as it was, I think, that laughter was another kind of spell.

The course came at a turning point in my career. Finishing my undergraduate studies, only at the end taking up any creative writing, I was at a loss as to what to do next. I wasn’t even sure I would apply to be in Derek’s class. But when Bert ‘strongly suggested’ I should, how could I turn that down? Bert had taught my only other writing class, where he had slowly, singlehandedly convinced me like so many others that maybe we could write poems, that our work mattered.

As artists, we should, I know, trust our own work, believe in ourselves. But figures of support, moments of praise can change everything. And, when someone like Derek, after working through a poem word by agonizing word, looks up at you and says, “The only thing to do with a line that good is to steal it,” (a line first said about a classmate’s poem that soon became refrain) well, you can’t help but change your life.

“The perpetual ideal is astonishment.” That line, from the title poem of White Egrets, like so many of his words, phrases, lessons, jokes, keeps echoing for me now as I teach my own students at the University of Edinburgh in Scotland. And when I think back to that class, those cold, autumn days in Edmonton, I see I spent those days in a kind of perpetual astonishment. How did we get here, out at another dinner with Derek Walcott? Is that what a poem can do? Is he, a Nobel laureate, really telling dad jokes?

I find myself astonished by my students now almost daily. I wonder, though, if we ever astonished Derek, even just a little. As the days grew shorter, my classmates and I spent several evenings trying to memorize one of Derek’s own poems. And, in the last class, as we, breathing together, recited the lines of his oft-anthologized “Love After Love,” I think his eyes welled up a little before he turned away. Maybe I’m just inventing that, but I can still recite the poem, and sometimes do. Just quietly, now and then, to myself, “…peel your own image from the mirror. / Sit. Feast on your life.”