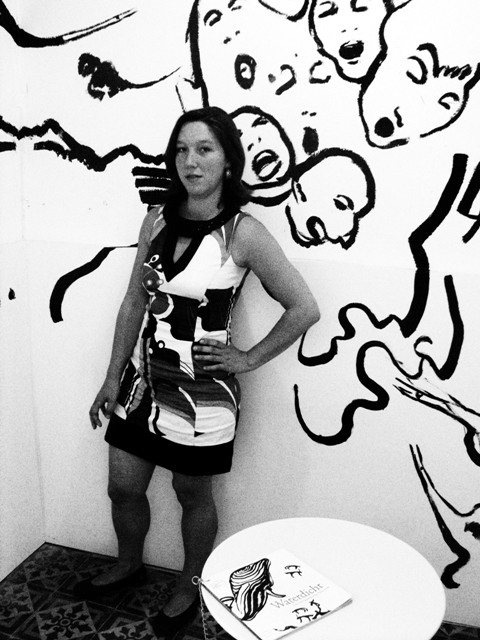 An interview with Lies Van Gasse by SJ Fowler.

The exceptional nature of the work of Lies Van Gasse, established, resolved and formidable, well before her 30th birthday, is clear to all who follow central European poetry and the figures who are now showing themselves as the future of the medium. Emerging from the vivid and remarkable tradition of Flemish poetry, Lies maintains a focus and an exactitude about her work and its direction that well belies her relative youth. Adept and acclaimed at both more traditional lingual poetry and highly original ‘graphic’ poetry, her oeuvre is innovative and confident, straddling the finer points of language and art. Our first Belgian poet to be featured in the Maintenant series, Lies Van Gasse is undoubtedly a figure whose prominence will only increase in the coming decades.

With thanks to Jan Pollet. 3:AM: How did your visual practise begin? How did it evolve?

Lies Van Gasse: When I was 17 I had to decide what to study. I was already writing poetry and taking art classes, but somehow I was convinced that studying literature at University would be to theoretical for me. I wanted to become a painter or to at least outlive my creativity, so I decided to go to Sint Lucas, where I studied Illustration.

I was never a common type of illustrator though; my works of art always obtained a place in-between paintings and drawings. I was very interested by the ‘signature’ of the artist. I remember Brody Neuenschwander giving a reading about the link between drawings an calligraphies, which influenced me a lot.. I was interested in movements as well. When I went to Italy for my Erasmus I made a huge work about dance for example. I went to dance classes to make drawings of the dancers in full movement and brought them together in what I would call a mobile or an installation.

Afterwards, when real life began, I held some expositions where I showed more traditional paintings. Yet I soon realised that art always had to be something deviant or anarchistic to me and so I began to feel that I did not meet the expectations of what a painter was supposed to be to the art world. But then I kept going my own way and kept developing my visual work, strictly seperated from my poetry. In 2008 I started making Sylvia and when I got started with Annemarie Estor at Hauser, I fully realised that poetry could be a part of my visual practise.

3:AM: You use the term Graphic poem, I haven’t heard this before. Is it somehow distinct from a visual poem or lingual art?

LVG: My graphic poetry is not very much connected to what you would call visual poetry. It’s more related to the graphic novel. When I started making ‘Sylvia’ my aim was to produce a graphic novel or even a ‘book without words’ like Frans Masereel did. But soon I saw the book needed text, and I realised that prose was not my language. I’m not truly interested in the narrative; I’m a poet (and painter) of well chosen images, awkward landscapes, lost souls, uncanny feelings, etc. If I had forced myself to write prose, my literal strength would have been reduced. That is why ‘Sylvia’ became a graphic poem instead of a graphic novel.

3:AM: Were you influenced by others work or was it a personal progression to be using painted graphics and poetry in the same artwork?

LVG: I was influenced mainly by graphic novelists and visual artists like Frans Masereel, Edmond Baudoin, but also Marlene Dumas and Kara Walker. Using Graphic poetry was a personal progression, but their work did influence my own practice.

When I published my first graphic poem, I very much felt as if I was standing alone using this medium, but I guess that’s because the Dutch poetry scene is a very narrow one, and because there’s a lot of scepticism about combining different media as well. Poets often think that you are ‘mostly a poet’ or ‘mostly a painter’, like Claus, who was a writer ‘that painted as well’, or Jan Vanriet, who’s now regarded as a painter ‘that wrote some poems in the past’. I on the other hand believe that I am an artist in the broader sense, and that my visual vocabulary is as developed as my poetic language is. Combining both media is an interesting path I believe and I truly hope that other artists/writers soon will start on similar experiments.

3:AM: You write most traditionally verbal poetry too I believe. How do you know what concept or idea will become a formal poem and what will turn into a graphic poem?

LVG: When I’m writing more traditional poetry, I don’t concentrate on the poem as much as on the album in a whole. And then I think the poetry sometimes demands autonomy, mainly because it’s more musical, more rhythmic, than my graphic poetry, and I would lose those aspects when I would force it into graphics. Those poems really need to be devided into verses in a more classical way.

The poetry I’m writing now has ‘Wenteling’ as working title, and it looks more like a musician’s composition exercise then like a set of separate poems. The album will look like a huge improvisation piece. Needless to say that adding graphics would mainly distract readers.

I’m also writing an album of shorter graphic poems in the mean time, so it’s mostly both I’m working on.

3:AM: Do your two practises seem entwined, or similarly motivated, or are they separate?

LVG: I always tried to keep them separated, but this didn’t always feel natural. So now I just try to use both my talents freely and I enjoy the way they are taking me. It makes me curious about how my own work is going to develope.

3:AM: Is there a thriving community of poets in Belgium using innovative poetic mediums?

LVG: There’s Krikri, a community for innovative sound poetry and visual poetry, and there’s a slam poetry scene. I know the people and I feel connected to some of them but not to the organizations in a whole because I am very self-consciously developing my own work and do not yet feel as if I am belonging to any poetical group.

3:AM: How has your work been received? Are you considered an artist or a poet?

LVG: I’m afraid I’m mainly considered a poet, but I have mixed feelings about this. I realise that the aims of the art world nowadays are very different from mine. Therefore I’m happy that my poetical practice helps spreading my visual work as well, but since my poetry supports my visual work I think it’s a useless problem to solve whether I’m an artist or a poet. I see art as the broader context, and poetry and painting are parts of it.

3:AM: How do you see yourself fundamentally? As a poet?

LVG: I was thinking about this a lot when Michaël Vandebril asked me to make live drawings on the ‘Nacht van de Poëzie’. When he asked me, I was truly excited, because it was something I always dreamed of as a visual artist. And it was fun! Yet afterwards people said they thought it strange that I didn’t want to show off with my poetry. I on the other hand was just glad that Michaël made me present myself very much as I am; a very complete, natural artist who uses different media for different messages. And that’s mainly how I feel about it and how I would want people to regard me. Sometimes I write a lot and other times I am obsessed with drawing, but I am always an artist.

3:AM: Could you detail your exhibition at the Watou? What work does it include?

LVG: At Watou I’m showing drawings of Waterdicht, a graphic poem I made together with Peter Theunynck. Peter Theunynck offered me the text and I was really happy with it. It’s an epic poem about whale catchers and for me it’s also a metaphor of mankind’s physical and emotional vulnerability. We made a book about it and in Watou I’m showing the drawings, a short film about the making of the book made by Jess De Gruyter (a poet/filmmaker who often connects with film in his poetry), and two big murals showing enlarged excerpts of the book.

I’m very happy with the exposition, because it shows my drawings in their own right and I hear people are excited about them. In some way Watou is just a preview, though. In september I’ll be doing a bigger exposition in Diksmuide at Robie Van Outryve’s galleryMontanus 5 where I’ll be showing more of my visual work.

And then, what is next? I’m just as curious as you are! ABOUT THE INTERVIEWER
SJ Fowler is the author of two poetry collections, Red Museum (Knives Forks and Spoons Press 2011) and Fights (Veer books 2011). He is the UK poetry editor of Lyrikline and 3:AM. He is a full time employee of the British Museum and a postgraduate student at the Contemporary Centre for Poetic Research, University of London.