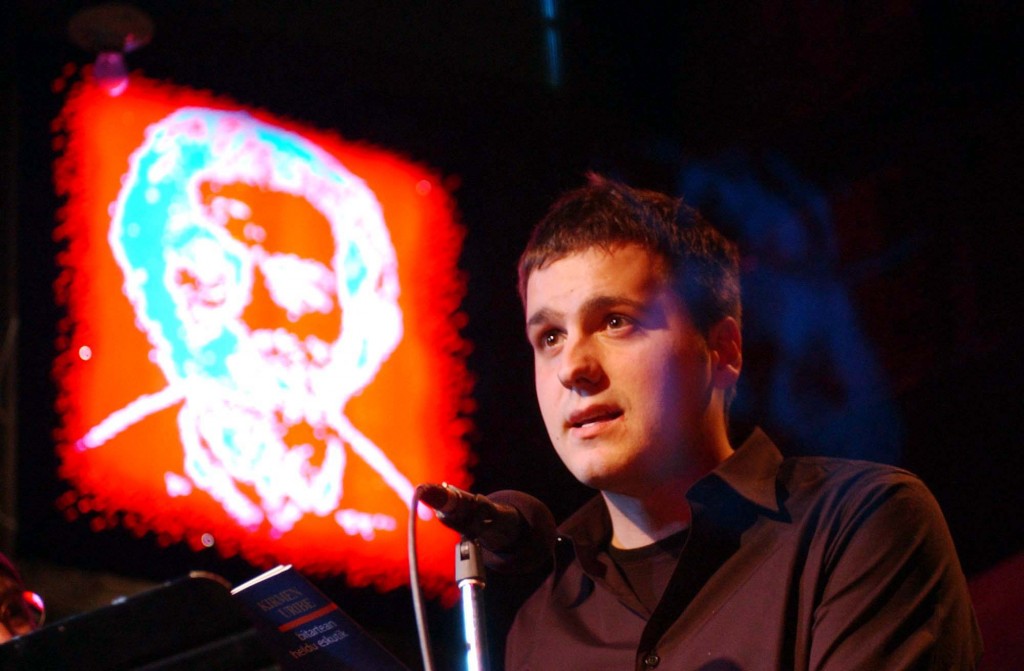 An interview with Kirmen Uribe by SJ Fowler

Kirmen Uribe is a Basque poet who has become a world poet. A pioneer and a sensation in Spain, a true representative of the new and modern from one of Europe’s most distinct cultures and languages, Kirmen is already one of the most celebrated literary figures in the history of Basque literature. His is the first Basque language collection to be published and translated in full by an American publisher, and he is the winner of numerous awards, reading his work at festivals around the world. His work is unsurprisingly unique – graceful in its vitriol, singular but not solipsistic. He is the standard bearer of a nation as it moves into new realms of poetic expression, for the 67th edition of Maintenant we are proud to bring you Kirmen Uribe. 3:AM: How does the Basque language lend itself uniquely to poetry?

Kirmen Uribe: Basque poetry has a long tradition. The first book printed in Basque was a poetry book, Bernat Etxepare’s Linguae Vasconum Primitiae, published in 1545 in France. However, the Basque oral poetry tradition is even older. There have been excellent poets after Etxepare, mostly in the XIX Century and in the twenties and thirties of the last century. But I don´t think that the Basque language is just good for poetry. We have good novelists too. The Basque language is similar to others, the important thing is that as a communication tool – it is alive and kicking.

3:AM: What is the state of the Basque language in your opinion? Is it thriving? Is it being represented as it should in poetry?

KU: The status of Basque language has changed a lot in the last forty years. My grandmother could read and write in Basque before the Spanish Civil war, but for my mother it became impossible to read anything in Basque since she was forty. Fortunately, after the dictator’s death the Basque language has had a great development. My generation is the first one in going to primary school, to secondary and to university with the possibility of doing all their studies in Basque. Besides, nowadays there is a literary system, newspapers and media in Basque.

3:AM: Bitartean heldu eskutik (Meanwhile Take My Hand), was the first time a book translated directly from Basque was published by a commercial press in the US. It seems you have arguably become the most well regarded Basque poet of your generation in the English speaking world. Do you think this is true?

KU: I’m very glad with that book and its reception in the U.S. I’m glad because the process was really “organic”. I mean, it wasn´t a big commercial landing. Firstly, I went to New York and read some poems accompanied by musicians. I was invited by the poet Elizabeth Macklin, who has translated my poetry into English. It happened in 2003. In that journey I got to know that one of my poems ‘May’ would be published in the New Yorker. It was amazing! I couldn’t believe it. Since then, we have published more poems in several newspapers such as Open City, Circumference… And finally the book appeared in 2007. It was a slow and natural process.

3:AM: Your work is appears imagistic, fluid with a distinct voice, that even emerges in translation. How do you write? Do you draft your poems or do they emerge in bursts?

KU: I write very slowly. I can be thinking in a poem for months. You can’t write poetry as a novel. One poem a day. The writing process is completely different. I think poetry is the best gender to express something essential in our life. The strength of a good poem is incomparable. Auden’s ‘In memory W. B. Yeats’ for example. Good poems are cathedrals built with few words, with just the essential words. That’s why you need to work a lot with a poem. Then you can write it in five minutes, or you can be rewriting it for ages.

3:AM: How much does your nationality, your culture, your language bring with it a sense of responsibility, that you are a representative of Basque literature, and heralded as a peaceful revolutionary in that field?

KU: I have a poem, called, ‘Birds in winter’ and in that poem I tell the story of two kids who try to save birds from the snow. But when they bring the birds into the house the birds die with the heat of the heater. I cannot forget my language when I am writing. Dozens of writers before me have saved birds for generations. And thanks to them I can write in Basque. My responsibility is to write good books and then try to translate them into other languages. It is the best way I see to help my country.

3:AM: How does Basque poetry relate to the poetry of Spain? It seems the Spanish & French poetry scenes can be factional, and regional, is this true?

KU: Well, it is difficult to be translated into Spanish. There are so few Basque books translated into this language, and as a consequence of that there is an ignorance about Basque poetry. That’s a shame because there are good poets in Basque.

3:AM: You were imprisoned for refusing draft into military service, what were the circumstances of this refusal on your part?

KU: There was an interesting people movement called Insumisión in the Nineties that consisted in not going to the military service. We were thousands and thousands of conscientious objectors in Spain. It was a pacifist movement and an apolitical popular movement. I went to jail, that’s true, but finally the military service was abolished. It was worth it and the good part of being in jail was that I could read a lot of books in there!

3:AM: You’ve engaged in many collaborations with other artistic mediums? Do you think poetry is underexplored as a collaborative art?

KU: But the times are changing. I can see that here are a lot of new ways to bring poetry to the readers. The internet could be a good place for it. Video-poems are so interesting. And, of course, live readings with music, video, or just with the poet reading his own texts in his voice. Literature is becoming more and more democratic. I mean, the distance between the writer and his readers is closer now.

3:AM: Could you detail your continued work with musicians?

KU: Well, I have take part in some multimedia projects with musicians and artists. One of these performance piece was ‘Bar Puerto’, made up of oral history, poetry, video and music together. It is a chronicle of the twentieth century in a Basque fishing town. From the Civil War through the dark postwar years, the arrival of Galician fishermen in the nineteen-sixties, the disaster AIDS created in the nineteen-eighties, and the nineties immigration from Africa; at the close, today’s fisherman, who heads off to his fishing grounds by jet plane.

3:AM: You have travelled widely through your work, reading across the world really. How has this experience, mixing with other poets, changed your work?

KU: Great! I love to travel and meet writers all over the world. That’s one of the best thing poetry offers me. Although we write in different languages we are not so different between us. I am looking forward to go to the poetry festival of Medellín in Colombia as we speak! the Lamb pit (Eggbox publishing). He is the UK poetry editor of Lyrikline and 3:AM magazine, and has had poetry commissioned by the London Sinfonietta and the Tate. He is a full time employee of the British Museum and a postgraduate student at the Contemporary Centre for Poetic Research, University of London. www.sjfowlerpoetry.com –  www.blutkitt.blogspot.com/ – www.youtube.com/fowlerpoetry