The birth of a major European poet is often heralded long after the fact by his or her emergence into the American poetic consciousness. The rapturous reception that has awaited Nikola Madzirov as he has travelled the US has only served to confirm what many already knew – Macedonia has produced a poet whose significance is undeniable, and whose gift is indelible. Nikola Madzirov is a poet who can look eye to eye with the great figures of the 20th century, he is one of our generations luminaries. His poetry is deft, sure and canny, he wields a wry and wise and often elusive aesthetic and while Peter Boyle has rightly traced his line back to Vasko Popa, Milosz, Herbert & Zagajewski, his voice is absolutely his own, absolutely of this generation. It is apt to leave the final words on Madzirov to Adam Zagajewski himself – “Madzirov’s poems are like Expressionist paintings: filled with thick, energetic streaks they seem to emerge from the imagination and to return to it right away, like night animals caught in the headlights of a car. “We are the remnants of another age” — Nikola Madzirov succeeds in convincing us.” For the 58th edition of Maintenant, we are very pleased to welcome our first Macedonian poet. 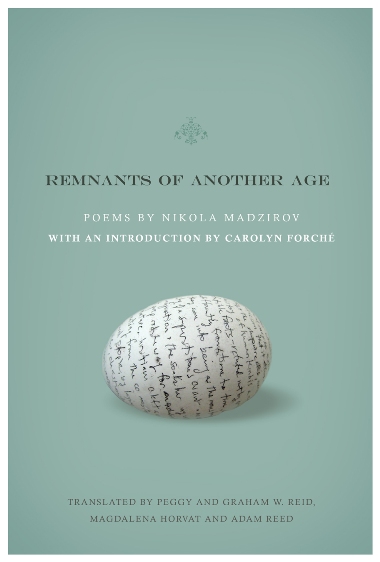 3:AM: It seems the performance of your work is often central to your output. Do you think poetry spoken and heard is somehow more vital than poetry read on the page?

Nikola Madzirov: Most important to me is silence. Not any silence but the silence that does not follow the punctuation, nor the rhythm of breathing. I regard telling stories as an essential gene in transferring the cultural and intellectual heritage, which is not to be found in any testament. It is an urge risen from the fear of forgetting, which is greater than the fear of death. In the Balkans people like to tell long stories over the grave of the deceased, to build him/her a huge white marble tombstone onto which they would be able to inscribe a text as long as a newspaper column. Then everyone goes home with the words they would like to hear above their own tombstone. I discover poetry as a voice that belongs neither to the air nor to the blank paper, nor to the black ink of the pen or the printer. I like to retell, but not to report promises and testaments; I want to write, but not with my eyes or ears closed. As Jean Cocteau has put it: “The poet doesn’t invent. He listens.”

3:AM: You seem to have performed at many poetry festivals, and even in Baghdad I am told. How did this come about?

NM: I like to be a witness to poetry, as often the inherited fears and uncertainties do not allow me to be a witness to the moment. To be in a country whose language one does not understand is as important as filling in the Mendeleev’ Periodical system with a new element, that has in fact always existed. The awareness of the different languages and poetics is perhaps the most fruitful self censorship that a poet can afford. To fill in the square of one’s own periodical life system planned for a new witnessing of life is as important as filing in the registry of births, with the difference that this document is filled in by someone else and not by the one who was born. Poetry is presence. And witnessing. As Carolyn Forché says, witness might be read as a public voice, but also a deeply intimate one. Into that space of inner and civilization voices, I move my body behind the poetic relocations, like an unexpected shadow from the street light that has just been switched.

3:AM: How do you view the content of your collection Locked in the City (1999), winner of the Studentski zbor award for best debut collection, looking back over ten years later?

NM: The first written book is usually outside the borders of childhood and that is one of the reasons why we always look upon it with a doubt and we wish to lock it permanently and secretly in the museum of lost or found objects. Turning back to what has been written does not have the same intensity as turning back to childhood. Books we want to burn or to finish, while childhoods we wish to forget or remember at all times. Sometimes I have a feeling that poetry is not being written, but being located. Paul Valéry says: “A poem is never finished, only abandoned.” I look upon my first book as a personal abandonment of the certainty of silence, I regard it as a part of a bigger book that will never be published in its entirety.

3:AM: You published Somewhere Nowhere (1999) in quick succession, followed by In The City Somewhere (2004), how did your work change over that period?

NM: Change is an outside feeling. As one can be convicted on the basis of their handwriting, one can also be convicted on the basis of their recognizable poetics. All artificial and forceful attempts to change one’s own expression are like transplants that improve blood circulation but not the faith. I do not moralize, but make an attempt to answer what is that so personal, beside the signature underneath the poem, which tells that a certain poem undoubtedly belongs to me. I don’t believe that anyone cares about all those fingerprints of mine left on the doorknobs I open every day, on the pad of my notebook, on the aching parts of my body? I know that several presidents and wars changed until I understood that my witnessing about the world has been changed.

3:AM: For your 2007 collection Relocated Stone you won the Hubert Burda award. Could you discuss that collection?

NM: Awards are a burden carried by our past. Schopenhauer wrote that burden helps the ships go straight, but how many of us are ready to carry the burden inside and not in packed suitcases? Relocated Stone was an expression of the frequent travels, of a personal and spatial hesitation, search for a home with all lockers and doors open, where the sheets and the mirrors are as smooth as the indifference of a war veteran. I started the book in Vienna, and wrote it on the roads of many European and American cities and inaccessible places, and finished it in Macedonian spiritual city of Ohrid. It was a time of peace when I left my home.

3:AM: You had two short films made about your poetry, how did these projects come about? Do you think poetry and film, and other artistic mediums in general, could work in collaboration more often?

NM: I do not envision verses imprisoned between the covers of books or engraved on a heavy immovable stone. Each book can be burnt because of heat, light or forgetfulness; each stone can become a part of a wall of prison or of a library wall. Everything is in movement: language changes, dreams expand, battlefields become archaeological sites, letters that were once pictures now want to picture, through their meaning, the entire world. Parajanov, Tarkovsky or Kim Ki Duk write poetry without using word codes. On the other hand, utopian and apocalyptic films fill the barren landscapes with verses from William Blake (in Blade Runner), T. S. Eliot (in Apocalypse Now) or Paul Éluard (in Alphaville). I cannot recognize a conflict between the speed of images and sounds and the prudence of poetic language.

3:AM: Could you outline your involvement in Lyrikline?

NM: Lyrikline is an excellent opportunity for “small and big” languages to meet at one place and to face the different memories and hopes. An electronic Aleph of the poetic world. This site nurtures the tradition of the poem being read by its author himself, without any additional dramatizing or burdening with the permanent electronic presence or accessibility. This endless netting of the verses does not raise the postmodernist question of invisibility or absence of the author, but it is the author’s own voice that is being affirmed, even when a poem is translated into twenty languages. Through this poetry net is being surpassed the prejudice for losing a poem by translation or the cliché for the many languages as a biblical punishment. Poetry lives through the voiced emotional signals of the authors, through their short silences while taking their breath to reach the end of the page.

3:AM: What is the state of Macedonian poetry? Is poetry widely read and are there many young talents coming to prominence?

NM: I do not believe in everlasting national poetic concepts. We share the language of our childhood, the common pain and expectations of the ancestors whose words cannot be dug up at any archaeological site; we shared the films and books carefully selected by the groups responsible for invisible censorship and the long struggle between the pagan traditions and Christianity that always ends in assimilation. All these things connect us in one family that uses the same language, but different concepts of selfhood and (m)otherhood. Individualism was the main form of aesthetic radicalization and so it is today.

3:AM: Is there is poetry of nationalism in some sections of Macedonia? Has there been historically?

NM: It is tragic if poetry is regarded as a way of confirming the stories of official histories. Poetry testifies or leaves secrets, but only through its own identity and fragile presence. The Balkans has always been a battlefield of struggles for languages, borders, histories, symbols and stories. Those who were losing wrote poems to glorify pain, those who won wrote histories to glorify figures and numbers. Plato left a record that poetry is nearer to vital truth than history. And the question about truth we usually raise when we are abandoned or vanquished. The Balkans should first forgive its own pains before searching the truth.