The impression left on the audience attending the Maintenant Lithuania events held over the weekend of April 8th only served to confirm Tomas S. Butkus’ reputation as one of the most complex and creative poets currently at work in the unusually healthy Lithuanian scene. Sometimes seen as an irreverent and idiosyncratic poet, due perhaps his use of many mediums (text, video, sonic art, collage), his membership in an experimental art performance collective or his distinctive use of surrealist imagery – his work in fact continues the revolutionary underground spirit of creativity that underpinned some of the greatest poetry Europe produced while Lithuania was under Soviet occupation. Perhaps rather Butkus’ work stands out from a certain contemporary style – reformed, controlled and meditative, by virtue of its energy and individuality. And without doubt, as the people attending Europe House and the Rich Mix arts centre discovered, the man is equal to his work. Celebrating the Maintenant Lithuania project and our 57th edition, we welcome Tomas S. Butkus, 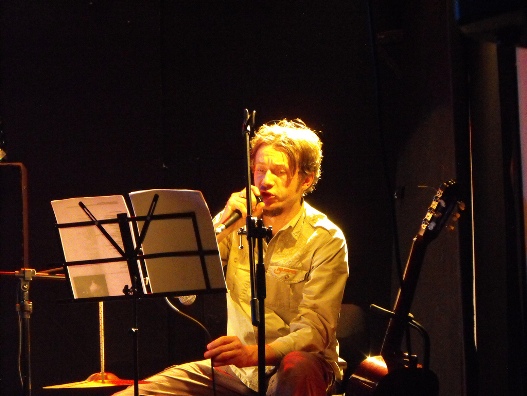 3:AM: Generuotos kalbos mutacija (Mutation of Generated Language), as a collection, seems to show off the range and depth of your work as a poet – including text, image, collage. How did you approach the book and could you offer some idea of its aims as a work?

Tomas S. Butkus: Well this book is my first official full-sized collection of poetry and I was working with it for almost ten years. It has been written as a homage to a post-war Lithuanian poet in exile called Algimantas Mackus (1932–1964), whose poetry stood all alone, and still does, in the landscape of Lithuanian literature, written by and for the Generation of Ornamented Language. The book is based upon an idea of clean-cut structure and architectonics. It is divided into three parts: II part, III part and an in-between part called “Facsimiles”. The book contains 40 poems, so you can see that there something is missing. There is one more thing in the structure – “Dielands” or an untranslatable “Mirėlynai” part. The trick is that all the parts contain 13 poems and the last chapter appears in the book as the only poem, changing in every 13th copy. This might be a mutation code or the idea of how to read the book… And I am very sorry, my next book Lakeland (Ežerožemė) will be more confusing – it will be divided into 13 sections with 13 poems…

3:AM: The book itself is a beautiful item, very much a piece of art in itself. This is clearly something you took pride in…

TSB: Beauty is a beast you have to pull. After the poems were written, there was a year of work on the images and a half-meter high pile of sketches and so on. And of course – for the design I had an idea of a C-section (Caesarean section), old style cardboard perfocards and a piece of hair on the cover… For this I went to a hair dress saloon with a massive sack…

3:AM: You seem to have a very fluid understanding of the mediums in which poetry can flourish. Your recent video poem shows that you are constantly seeking new arenas for your work…

TSB: Yes, from time to time I turn myself to bury stuff in a different way… First it was the text (early stage, 1992–1999), then it comes as an image (mutation stage, 2000–2005), later I start playing with the sound (bunnies stage, 2006–20xx). So now I am trying to wrap my poetry in video. Fullmoon emptiness is an experiment of that sort. But I have to say in general I do not care about arenas. I do care of the concept and the poetry, which is a medium itself.

3:AM: Is there a tension between more innovative work and what has been the tradition in Lithuania? Is there an element of the way poetry is treated that you would change?

TSB: I would say in human history or in evolution there is always a tension. Traditional ways of expression, old techniques and matters are always facing the fear of being outdated or recycled. In Lithuania there is another thing. Lithuanian tradition of modern culture and literature is pretty narrow and understanding of innovations in principal is primitive. In Lithuania too many poets are writing without questioning what the hell this poetry means. It is just a goddamn ornamental practice on words, packed into bookshelves. I am trying to escape this. Maybe this is an explanation why I walk in this parade with dynamite.

3:AM: How has your own relationship with writing poetry developed? You took some time away from writing did you not?

TSB: I write and I feel I am very near the heart of things. Through this I navigate myself into the space of painful patterns also. Yeah, and it shakes and takes time, because I do not trust that feeling, because it is a tricky thing, a pleasure. And it takes time, because when you are reading this on another day you cannot recognize it. So some of my poems, written 15 years ago are not written yet…

3:AM: You are involved with a performance collective, Concrete Bunnies (Betoniniai triušiai), could you detail the aim of your work with the group?

TSB: Oh it is a new story… The group of sound and poetry has been formed in 2005 and consists of three regular members (still): Antanas Dombrovksij, Vadimas Korotajevas and me. The very new experience is collaboration with soprano Skaidra Jančaitė. I hope we will make some new recordings this summer. In general it is hard to say what we do – is it ambient sound, or live electronics, filled with lo-fi or urban folk stuff? The only thing that’s clear is this sound is nothing without an attachment of poetry and the way it sounds inside. During the six years of being together Concrete Bunnies have been involved in twenty performances in Lithuania and Germany and released two CDs. The last recording God-Thing / Live was released half a year ago and it consists of our live performances, recorded between year 2007–2009. This recording presents a clear idea of what we do and how. I would say this music fits into the category of visual sound poetry that Giedrius Kuprevičius, a famous Lithuanian composer, calls by a witty term diarrhea / free music (d-fm). (The whole story of Concrete Bunnies is here).

3:AM: How was your experience collaborating with Tim Atkins for the Maintenant Lithuania project?

TSB: It was great! First we have been sharing our poems and had a headache what to do with it. But later I realized that we have something in common… So I rewrote his 366 sonnets in 4 poems as ‘Collective Poetry Ensemble’ (what the poetry will be I hope in some 200 years). And Tim rearranged my stuff into a ‘Lexicon IMOC Beefheart Translations’ and did a kind of unbelievable Swedish cartoon, called ‘God-Thing’… It was a play, kind of. But at the same time I felt that I know Tim for more than ten years. It was a feeling coming from an understanding of mutual poetry gesture and language.

3:AM: And what were your impressions of the reading weekend over April 8th and 9th when performing at Europe House and the Rich Mix in London for the Maintenant readings? Did you begin to make some lasting ties with the poetry happening in London?

TSB: What can I say? To have a reading in London with a bunch of spectacular poets and poetry in front of those flags and stuff is wonderful. But yes, for the poetry I would say – no flags and politics anymore (if it is possible). I like these kind of performances – it seems that people are eager to get through to the realm of poetry, you know, to have been involved in an event. And your work is to show that poetry is not only words or pun-spike lyrics. You turn yourself into the clown. And at the same time you become a king. A king without the crown and without the kingdom.