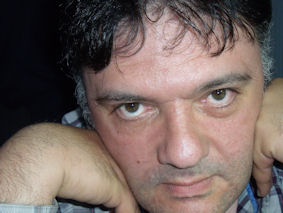 Island cultures produce island poets. Moreover, island cultures tend to have somewhat unique and turbulent histories. Malta, though diminutive, has produced some of the finest Mediterranean poets of the last 50 years, and it is no accident, considering its recent history and geographical location. The generation of Maltese poets that came to prominence in the 1970’s revolutionized Maltese literary culture irrevocably, and the transformative mark of that poetry can still be felt today. At the forefront of the current crop of gifted poets stands Immanuel Mifsud, internationally recognized for his deft, vital poetry and his prolific output in a series of literary mediums. A politically conscious and socially-grounded poet, we proudly present Immanuel Mifsud as the 56th edition of the Maintenant series.

3:AM: Malta has a unique historical position and a unique island culture due to that. How do you think this has affected the literary culture of those born and raised in Malta?

Immanuel Mifsud: I’m not so sure Malta’s island culture is unique. I think that one can draw a number of similarities between Malta and other small islands. Granted, her geographical position shaped her history and her development as an island state and a nation, but still the similarities with other islands which have had a totally different history are there to be seen. I would say that what really differentiates Malta from other tiny islands like, say, Pantelleria and Lampedusa, or even the much larger Sicily, is the fact that Malta was ruled by different states or rather different super powers, most significantly the British.

All this is meshed in our literature: religion featured even in the ’60’s literature despite its claims at being revolutionary; the sea and Mother are two dominant metaphors which we cannot rid ourselves of; and space (or confinement) is yet another important theme. Of course, times have changed and so have the writers’ dealings with the island reality. For example Maltese Romanticism (ie early to mid-twentieth century) glorified the island culture and was very inward-looking, insular I would say; but once the writers’ gaze ventured beyond the bastions (physical and metaphorical) surrounding the island, a sense of unease and claustrophobia emerged. It is so very easy to romanticize life on an island; living it day in day out, on the other hand, is a totally different experience.

3:AM: Does it become a place you call back to, almost finding itself in your poetry? The likes of Lucio Piccolo, the image of the great poet always bound to his home island, Sicily, gives the impression this might be so.

IM: Definitely. And this is the case both on a literary and on a biographical level. So very few Maltese writers have emigrated, and those who did emigrate have returned some time or another. But also on a literary level one can witness this recurring theme of the return and adherence to the island. Well, since the 1970s adherence has turned into restraint. I appreciate it is an ambivalent position which does not exclude a love-hate complex with the mother country. With writers of my generation the ambivalence is even more pronounced than with the writers of the 1960’s generation who were still persuaded that they had some obligation towards the nation and they were bitterly disappointed when post-Independence political development deviated from their ideology. My generation couldn’t care less. I think we are in keeping with the Western Generation-X: we lack ideology even though we are very political. I would say that my generation has no sense of national identity.

As for the call back you mentioned in your question, I can see it very evident in the writing of the 60’s generation. Their early writings followed the cult of the Angry Young Men, but in their more mature output they did return to the island, to the romantic conceptualization of the Mediterranean. It could happen to us sooner or later … I cannot tell.

3:AM: What is the influence of the Maltese poets who came to prominence after independence, those like Friggieri and Azzopardi, who seemed to lead the rejuvenated sense of Maltese culture as a stand alone nation?

IM: You have mentioned two of the most prominent writers of the 60’s generation although there are stark differences between them. Friggieri has kept much of the previous expression, only he updated and emancipated it. Azzopardi, on the other hand, has addressed his look more to the West and to the English-speaking literature than anything else. I think it was the most fundamental aim of their generation to update and rejuvenate the identity of the Maltese state. Bear in mind they lived the time when Malta shifted from a colony to an independent state which still hosted the British forces, to the later development of fully fletched freedom from foreign occupation. Simultaneously they experienced the shift from a very religious and confessional to a more lay society. With us, the experience was different: we were born in post-Independence Malta, we lived our childhood in a socialist society with a socialist economy where everything was state-centred and with a rigid control of the media, and then, after 1987, this society embraced a late capitalism of sorts and eventually membership in the European Union. Our experiences of the nation state are quite different.

3:AM: What is the state of poetry in Malta? Is it widely read?

IM: My impression is that the state of poetry has regressed. Poetry was, I believe, at the forefront of the 60’s cultural revolution, together with plastic arts, and to a much lesser extent prose. But nowadays prose has the upper hand and the most interesting work is produced by prose writers rather than the very few poets left. Publishers are not interested in poetry and even our most prominent poets have come to a point where they have to publish themselves, which is rather sad. Needless to say, publishers are only interested in sales, and poetry simply does not sell. But I have the impression that this state of affairs is not unique to Malta. I have had the opportunity to participate in a number of poetry festivals, and the same complaint is voiced by poets from virtually all over the world, with some rare exceptions. What is more worrying, is that local poets have resigned themselves to solitude. They write, occasionally they publish, but that is all. No public readings ever take place, save for the occasional book launch. Forty years ago public readings were almost the order of the day.

3:AM: Is there, or have there been recently, generations of new poets emerging?

IM: Yes, and the most prominent are women writers with a very clear feminist voice. I wouldn’t say they are the first feminist writers, but they are perhaps more vociferous than their predecessors, more disciplined and their feminism is more conscious and focused. Nadia Mifsud Mutschler, Simone Inguanez and Simone Galea come to mind. Then there are other poets who have been experimenting with different forms, like Antoine Cassar who writes maccheronic poetry or Cali Grima who has a distinctive expression. Mifsud Mutschler, Antoine Cassar, Karl Schembri and Norbert Bugeja are interesting writers also because they do not live on the island.

3:AM: Your work seems anecdotal and descriptive, almost sketching portraits of life with your verse. Do you think this is accurate? How does your process of writing work? Do you follow inspiration or set aside time to work?

IM: Now we come to the difficult questions of the interview as I find it very difficult to talk about my work. It is probably that my poetry, especially that I am working on lately, tends to be impressionistic. There are these fleeting moments which I try to capture and reproduce. But there’s nothing original in that. My poems aim at portraiture, as you have noted, rather than posing arguments. As for my writing process: it is very irregular and slow but I very seldom revise. Normally poems simply emerge in their complete form, meaning in hendecasyllables which is the form I adhere to religiously. With prose, it’s a different experience altogether. I spend a lot of time researching the stuff I’m writing about, and that could prove to be a very arduous task. As a rule I work at night, in my room, but if the need arises I can write anywhere except on aeroplanes because the fear of flying prohibits me from concentrating.

3:AM: Could you detail Versarti and how that group was formed?

IM: Versarti was a literary group I co-founded at high school back in 1984. The original idea was to update the 60’s movement to the realities of the eighties which marked the dying years of a socialism gone wrong. But we were too young for that. What’s more, only few of us kept writing. Adrian Grima,with whom I co-edited a poetry book about climate change, has since become known as a poet with a strong political content and a prominent literary critic. Marco Galea has also become an important academic in theatre history and his wife Simone will be launching her new book in a few weeks time. I really don’t know who else kept writing from the original Versarti group.

3:AM: You are industrious in writing prose and plays, as well of children’s literature? How do all these literary mediums interact with your poetry?

IM: I don’t write plays in fact. I did when I was younger but I soon realized that writing for the theatre was not my cup of tea even though for a long time I directed for stage. Children’s literature is a relatively recent venture which became significant for me since my son was born. I have written a short collection of very short stories and a collection of lullabies, and there’s a collection of children’s poems in print. A number of people have observed there is a notable difference between my prose and my poetry. I’m not so angry in my poetry. I don’t see it that way, but I know I’m not the best analyst of my writing. I think of myself more of a poet than a prose writer, despite having published much more prose than poetry. Then again, I am more known as a prose writer, possibly because some of my prose books have created some controversy and attracted attention for the wrong reasons.