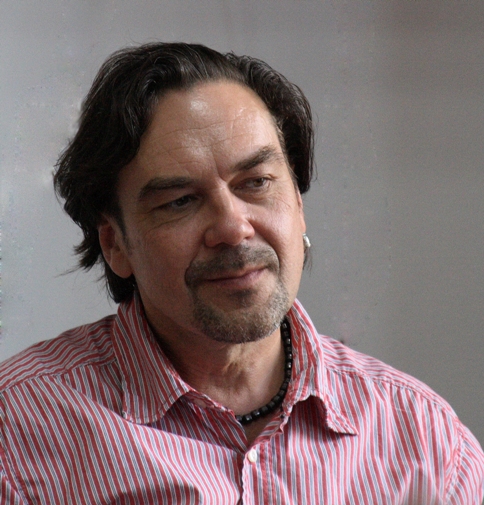 A poet of international significance, the remarkable life and poetic career of Yuri Andrukhovych could be the source material for a film, or a good book (as it is, in a manner of speaking). After serving in the Red Army, he was a founding member of arguably the most important experimental literary group in the history of the Ukraine, the Bu-Ba-Bu (the group’s name stands for бурлеск, балаган, буфонада–’burlesque, side-show, buffoonery’), before taking his mantle as one of the most important political-literary figures in his home nation and a significant presence during the 2004 /2005 Orange revolution and it’s subsequent deflation. His is an utterly distinctive idiom, both in his poetry and his widely acclaimed novels, the work of Yuri Andrukhovych is some of the most bombastic, vital and memorable being produced in Europe at large and stands in the great European tradition of parody, satire and criticism. We are honoured to welcome our 53rd Maintenant subject, winner of the Leipzig Book Prize for European Understanding, Yuri Andrukhovych.

3:AM: Could you talk about your role in the creation of the Bu-Ba-Bu literary group?

Yuri Andrukhovych: The role of everyone involved, all three of us, was decisive. I personally met Viktor Neborak and three weeks later Sashko Irvanets. So, I was a kind of conductor or maybe a middle-man between them, because they’d never met each other before. In my letter to Viktor, I proposed that we create some new group, a poetic group of course, a trio or maybe triangle. I saw some affinities in our poems or rather in our mode of poetic speech. So, in the letter to Viktor I just mentioned, I wrote that our affinities could be “Burlesque, Balagan, Buffoonery”. The first and third terms are clear, the second one means a kind of a small cheap circus or a wandering comic theater. Viktor was very enthusiastic about my idea and in his answer he wrote he had already found a name for our group – Bu-Ba-Bu, the first syllables of the three terms I’d proposed. It was the beginning and the first meeting of Viktor and Sashko took place on April 17th 1985.

3:AM: The group was fundamentally opposed to the social realism of the Soviet area and you are often noted for influencing generations of artists and poets with the group’s experimental poetic explorations. Do you see that influence before you today in other contemporary poets?

YA: Yes, I do. I think there is something like a continuous chain of influences. But maybe we were the first ones who held our influences in a playful, unserious way. We brought into the Ukrainian poetic realm a taste for parody and aesthetic provocation.

3:AM: Has the Ukraine poetry scene a great history of literary movements?

YA: Not really. The history of Ukrainian literature (till the beginning of the 1990’s at least) is first of all the history of censorship, unfreedom, bans. The literary movements usually have to be a part, and maybe a sign of, a flourishing, intensive literary life. We’ve never had that in the Ukraine. But there was a very interesting period in the 1920’s – with some different movements and groups like the Futurists, Neo-Classicists, Constructivists. Most of their participants were annihilated by Stalin’s regime in 1930’s. Some interesting groups have also existed in Western, non-Soviet, Ukraine. But everything was brutally interrupted by the Second World War in 1939. Then in 1960’s there were some completely underground communities like the Kyiv school or the “Garden school of poets”. But they were invisible.

3:AM: You served in the Red Army as a young man, how did this experience influence your writing and your life?

YA: I was lucky to serve shorter than one should usually in the USSR because I was after university studies – in that case 1.5 years instead of 2. Nevertheless I can remember that time very clearly and it was the most difficult, maybe most painful too, time in my life. During the second half of that period, I became an “old soldier” which meant I was freer to have my personal niches. So, I started writing prose, the short stories about our military nightmares. When I was back home I continued dreaming of the army while sleeping. Actually those nightdreams visit me even now. Well, the literary result of these 1.5 years was a small collection of seven stories. To be honest I was lucky not to be sent to the war in Afghanistan but as I spent some weeks in a military hospital I met there some soldiers who were back from that war and they told me a lot of shocking things.

3:AM: You are well regarded for your mastery of satire, your novels and poems often being part of the great tradition of the grotesque, following Adamov, Brecht, Gombrowicz…

YA: Yes, I think grotesque is the right word. The most prominent Ukrainian philologist and literary critic Professor Yuri Shevelyov, who taught for decades at Columbia University in NYC, has written a large article about my novel Perverzion (1996) in which he defined something like three sources of my writing – Ho-Hei-Ho. The Ho’s are Gogol (in Ukrainian tradition Hohol) and E. T. A. Hoffmann. And Hei is Heine, Heinrich Heine. So, you can see the direction.

3:AM: Your daughter, Sofia, has come to some prominence in recent years for her poetry? Did you encourage her from a very young age in her writing?

YA: No, she doesn’t write poetry, she is a very good prose writer (although I probably may not praise her too much). No, I never paid special attention to her skills in her youth. What she usually says about this situation is that, in her childhood, she has always seen at home somebody who was just typing for days and nights, always typing. Of course, she began to like this process too.

3:AM: What is the role of poetry in the political life of the Ukraine, from your perspective? Is it a vital medium of expression?

YA: Unfortunately it has become a very important political medium again. Why do I say unfortunately? Because it means that due to last changes in our political life (the last presidential elections etc.) we are again in some authoritarian system. The government is trying to copy the “Russian model” of a state which is a post-communist police state with very high corruption in all the spheres and branches. The unfreedom is back. Some people at such a historic moment need to listen to the poets – what will they say.

3:AM: What is the role of poetry in the cultural life of the Ukraine? Is poetry read widely and critically well received?

YA: Yes, Ukrainian people basically love poetry, they usually can quote a lot of verse, they know some poems by heart. But – in a rather traditional style. I think Ukrainians are not very open to innovations. They can accept some new forms only if they are already widely accepted and recognized in other cultures. Maybe Ukraine is a typical case of “no prophet in his own land.”

3:AM: You are well known and lauded for your activism and your political stance in both the poetic and prose literary forms. What was your role during the Orange Revolution and what is the result of that period of political engagement and energy?

YA: My role was just the role of one of the demonstrators. I was there, in Kyiv like the millions of other people who wanted to live in a better, European country. So, I demonstrated for nearly two weeks. It was nothing extraordinary, my role. I have also commented on our situation for some Western colleagues, politicians and for Western readers. In those days I wrote a lot for Western media and gave a lot of interviews. What is the result? We, the civil society in Ukraine, have lost. We didn’t even expect such a brutal comeback of our Soviet past. So, we have to learn. We have to prepare ourselves for the next revolution – this is the main result.

YA: Yes, but just in a part of Ukrainian territory. The main problem of this country is that we are really divided in two big languages and hence – two different orientated groups. If the state power tries to strengthen positions of one language, there is immediate and sometimes aggressive resistance from the second part. Each of the language groups feels that it’s language is threatened now. So, Ukrainian was officially supported by the former government to the extent where the Russian-speaking people started protesting. Now they take the advantage for revenge. It seems to me they do it more aggressively than we did, their opponents.

3:AM: And the Ukrainian language itself, does it flourish or is it under threat?

YA: Yes, at the moment it is under threat again. There are less and less Ukrainian books, papers, Ukrainian songs on radio, less Ukrainian programs on TV, less movies in cinemas dubbed into Ukrainian. Paradoxically, it can cause a new big social splash of fascination for this “oppositional culture” – something that I have witnessed already twice in my life: in 1989–91 and, of course, in 2004. So, maybe next time in 2017?