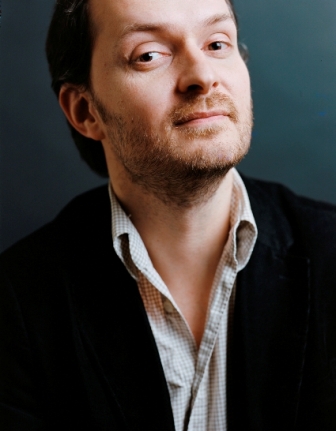 It is rather apt, or rather remiss, that for the fiftieth edition of Maintenant we present our first French poet. The first of many no doubt. It is all the more appropriate, given our dictum, that our first French subject is the youngest, and 35th, member of Oulipo. As the most contemporary representative of that legendary group of writers and poets, it goes without saying Frédéric Forte is an adroit, inventive and certain presence in the ever-lively and rich French poetry scene. We are extremely pleased to mark our half-century featuring a poet who epitomises our commitment to urbane, intelligent and important poetry which is still evolving into its own distinguished completion.

3:AM: Let us begin with a discussion of your involvement with Oulipo. How did you become to be a member of the group?

Frédéric Forte: I discovered modern poetry by reading Raymond Queneau (I was around 24 y.o.). I had heard of Oulipo before but this renewed my interest for it: I read Roubaud, etc. (and also a lot of non-Oulipian contemporary poetry).

When I decided 2 years later to ’seriously’ become a poet, I began naturally to work on more largely formalist texts. I felt this was my way to be a writer. The Oulipo represented an intellectual family of people thinking the same way as I was. So after that, I sent my works to Oulipian poets like Jacques Roubaud, Jacques Jouet and Michelle Grangaud. That’s how the Oulipo became aware of my existence. In 2002, I was invited to a monthly reunion. There, I met the English and Oulipian poet Ian Monk and we wrote together a bilingual book named N/S. And in 2005, after I published Opéras-minute, the group decided to cooptate me as its 35th member.

3:AM: Could you detail the content of your work with Ian Monk?

FF: N/S is a book made of 8-lines bilingual poems (4 lines in French, 4 in English). The idea was to cross formally both languages in all the ways possible. For an 8-lines poem, there are 70 combinations — from EEEEFFFF to the contrary (FFFFEEEE) going by FEFEFEFE for example (E is for English and F for French of course). There’s no rhyme or fixed meters involved in the process.

The title means “North / South” or “Nord / Sud” because Ian Monk lives in Lille (north of France) and I was living at the time in my hometown, Toulouse (in the South-West).

Ian and I sent 4 lines, at a time, to each other by e-mail in order to complete the poem. Once we completed the first 70 poems, we did it again in “reverse mode” and then Ian translated the whole work in mirror. Finally the book contains 280 poems (140 originals and their translations).

3:AM: Has Jacques Roubaud proved a significant influence upon you as you have come to know him?

FF: As I said I first discovered Roubaud’s work when I was looking for Oulipian books, after the ‘Queneau trigger’. And it completely turned upside down my conception of poetry. I found out that a poem could be at the same time abstact and lyrical, intimate and formal, playful and deep, a very unique kind of conceptual object. After the first shocks that have been ” ” (which means actually ‘belongs to’ in maths) or “Quelque chose noir” I read everything of his and nothing made me change my mind on the importance of his work. I think Roubaud is the only ‘genius’ that I ever met and also a very kind man, discrete, respectful and not trying to impose his views to the others. He is a master I freely chose but absolutely not a guru!

3:AM: What methodologies do you pursue in your work that might be recognisable to those who are familiar with Oulipo through the work of Perec, Roubaud, Mathews etc…?

FF: Each Oulipian has his own approach of writing and his own methodologies. For my part, I mostly dedicate my efforts to use fixed forms and invent some new ones… In a way, it’s a ‘tradition’ in the Oulipo history…

3:AM: What are some of the new forms you have invented in writing your poetry?

FF: I haven’t invented very many actually… Let’s say: the ‘opéras-minute’ (a kind of spatial meta-fixed form that may fix other forms!), the book should be translated soon and published (if everything goes well) by Burning Deck in 2 or 3 years… ; recently I began to write long prose poems called ‘99 preparatory notes to…’ where I try to ‘think’ (poetically) about something (the blue of the sky, the impossible or the action of slowing down, for example). This form is very useful when a review asks you for a text: “What is the subject? Aquatic life? Ok, I’m gonna write ‘99 preparatory note to the aquatic life!”

Most of the time I work on older forms (sonnet, sestina, etc…) and I try and find a way to renew them…

3:AM: While many philosophically justified movements in poetry seem to have their day and then die away (the nouveau roman an example, an interesting discussion in itself and its relationship to Oulipo), aping the ’seasonal’ nature of philosophy, it seems the Oulipo movement, in poets like yourself, is renewed, renewable even and still a vital presence in French poetry. Do you think this is true? If so, why?

FF: I would say first that the Oulipo is not a ‘movement’, it’s a group of people, not trying to persuade they’re good and the others are bad, but just working, generations after generations, on the potentialities of literature. This maybe could plainly explain the longevity of the group.

I don’t know if the Oulipo is ‘vital’ for French poetry, maybe it would be pretentious for me, as an Oulipian, to say it. All I know is: it’s alive and it’s part of the thing. The Oulipian logic brings poetry in new, different directions (as others approaches do in their own ways). The important point is to keep poetry as diverse and alive as possible.

3:AM: You have translated English texts into French, do you engage in a lot of translation work?

FF: Not really. I’ve done (along with the poet Bénédicte Vilgrain) an ‘Oulipian’ translation from the German of Oskar Pastior’s anagram-poems. I have also translated Uncaged, prose poems by Michelle Noteboom (who is an American poet, and my partner). To have the author at home helped me a lot! And I will do it again soon, I hope. But, really, I consider the translation of poetry as a poetic act itself. To translate a text is a wonderful way to deeply know it and it’s also a way to explore new territories for your own poetry.

3:AM: You worked as a bookseller, do you consider this your profession? Does it support your poetry?

FF: I love bookshops, I’ve got a lot of friends working as booksellers but this is not my profession. It used to be a job. And in a way, a difficult job for a poet who could see every day that a lot of readers are not curious about poetry at all.

For now, I have the incredible chance, to earn money doing what I love. Not with the book sales of course but doing residencies, public readings and workshops. It’s a luxury. And I don’t know how long it will last.

3:AM: Do you think France as a nation is producing the talent in poetry to match it’s immense poetic history?

FF: Yes! Not because of me of course. But I think the poetry production is vivid, with a lot of authors exploring language in many directions, and great (small) presses to publish them.

3:AM: Are there defined movements and styles in poetry emerging from the next generation of poets? Are there young poets coming to the fore whom you admire?

FF: I don’t really see ‘defined movements’ emerging at this time. But maybe I don’t clearly see. They are many ’styles’, many directions, as I said, explored by French poets. Too many to detail them here. There’s an excellent book about it if you’re interested by the subject : Caisse à outils by Jean-Michel Espitallier (”a panorama of today’s french poetry”).

3:AM: Is there a difference in the culture of poetry (it’s nature, the attention it’s given etc…) between those writing in Paris and elsewhere in France? Does each city, and each individual region produce definitively different work, while generalising of course?

FF: You know that France is a ‘jacobin’ country, very centralized. I would say Paris attracts a lot of artists, like a magnet. I was born in Toulouse and if I decided to move in Paris quite recently it’s of course because of my Oulipo membership but also because so many things occur in Paris that don’t exist elsewhere in France. Nevertheless, many great poets live in other French cities. And, for the poetry I like, I don’t see clear distinctions between Parisian and non-Parisian poets.

It’s true, another kind of ‘regional’ poetry also exists, I would say, in a very reductive way, ‘countryside poetry’. But I’m not really aware of it… and not interested in (shame on me).