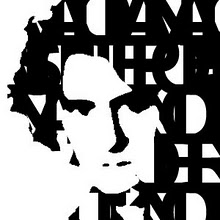 Following in the footsteps of some of Europe’s greatest poetic innovators in the 20th century, the work of Anatol Knotek is the latest chapter in the visual / concrete / conceptual poetry legacy that has emerged from Austria, and most specifically, the city of Vienna. It is often suggested that concrete and visual poetry reached it’s apex in the 1950’s to 1970’s and since then has declined somehow. It is probably true that the vitality and power of the original movement, (led, outside of Austria, by the likes of Bob Cobbing, the de Campos brothers, Henri Chopin, Edwin Morgan, Andras Petocz, Shimpei Kusano) could not be sustained and attention from a wider readership waned. However, it is clear when poets as young as Knotek produce work of this superlative quality the medium is not lacking, it is in resurgence and rather some of the very best poetry in Europe is part of this tradition. At it’s forefront sits Knotek and we are pleased to present a poetic artist whose work will no doubt become a focal part of the European poetic landscape for years to come.

3:AM: Vienna seems to be a locus for the avant-garde in poetry, almost perhaps more than any other city since the mid-1950s onward. How is it’s standing now compared to the past?

I am thankful to live in such a gorgeous city and I live on the fact (in an artistic sense), that I have the possibility of visiting an inspiring exhibition nearly anytime I like. By the way, there is this great Ernst Jandl show in the Vienna museum right now!

However, I think the times when Vienna was the center of experimental literature and the avant-garde in general, passed ages ago. Hopefully I am wrong and I may not accurately evaluate the current situation, because as a kind of “maverick”, I have very little insight into the “classic” literary art scene. My primary focus of interest is concrete- visual and digital poetry, a pretty large subject area and so it is difficult for me to make out current, local literature-movements.

3:AM: What do you think is the legacy of Wiener Gruppe in poetry in Austria and in the world as a whole? Jandl, Artmann, Mayrocker, Rühm, Bayer seem to have achieved a significance in the circles of the avant-garde but do they have a literal legacy?

AK: I think the influence of the artists you mentioned is not to be underestimated. There are actually no schoolbooks of the German language without reference to the Vienna Group.

Ernst Jandl and Gerhard Rühm had and still have a significant impact on my work. Especially the connection between literature, music and visual art, is in my opinion the legacy of this group. They were “multi-media” artists long before the term was invented, and when it comes to the literary history of the second half of the 20th Century, even internationally, you won’t be able to ignore their influence.

3:AM: And the Vienna Action group? What is the legacy of Nitsch, Mühl, Brus et al?

AK: As far as I can see, Vienna Actionism had a very formative influence on various art movements, but most likely on the performance and visual arts of the last century. Among the Austrian visual artists, I would particularly emphasize Arnulf Rainer, one of the most influential Art Informel painters and Markus Prachensky, who particularly affected me, as you can see in the “Concrete Poetry vs. Infomel” works. Generally speaking, the visual impressions of fine art is equally important for me as literary influences from the experimental scene.

3:AM: When one searches you can see that figures from the Wiener Gruppe and others around the original era of concrete poetry embraced collectivity and collaboration. Jandl’s work with Bob Cobbing in London is something especially interesting to me. With your work recently involving Marton Koppany, I wondered how you perceived such exchanges?

AK: The collaboration with Márton Koppány was a completely new experience. I never thought this kind, or any kind of collaboration in the field of Visual Poetry would work for me, because I was always concerned about working alone. However, at that time, I realized that I was inspired in a very different way and my style seemed to change like I never expected.

Of course I closely followed the cooperations of the Concrete Poets, and admired their work, but in general, I rather let myself passively influence by these collaborations.

3:AM: How did that collaboration begin? How do you see it evolving? Had you known of Koppany’s work for some time?

AK: I knew the work of Márton quite some time before. When dealing with visual poetry, you will encounter his work very often. A few months ago I published a number of his poems on my blog and so it happened that a very enjoyable e-mail correspondence ensued. He asked me, if I would be interested in working together and sent me a (rather minimalists) visual poem, asking if I would like to reply to it, howsoever. And of course I wanted to!

We hardly spoke about, or more precisely, we barely interpreted our own or the other ones work, we were merely guided by the visual language. Our way of communicating turned out to be something quite natural and common for us. With Márton’s special kind of humor and his witty use of forms, our collaboration became a true pleasure. At the moment we’re taking a break, because Márton is preparing readings and workshops he is giving soon in the States, but we agreed on an open project, so there is definitely more to come.

3:AM: You are a multi-faceted artist and poet. How do you conceive of visual poetry? How did your work develop? Had you an interest in Visual poetry from early on?

AK: My interest in visual poetry arose relatively late, about ten years ago. In my youth I mainly painted and I was much more interested in fine arts than in literature. My pictures were particularly shaped by influences of late 19th and early 20th century paintings. Subsequently I started with text collages and concrete poetry. After meeting the Austrian poet Peter Daniel, and a trip to Jürgen Blum and his “Open Book” (concrete poetry on more than 100 house facades) in Hünfeld (Germany), I realized the great fascination of visual poetry for myself. From then on I worked primarily in that field and began, still strongly oriented to the visual language of figurative painting, to “write” images.

Still I am always looking for a new “language-design” I have in mind and an almost perfect combination of text and image. Thus “written pictures”, “text objects”, “textanimations”, “concrete poetry” and other “text-experiments” accrued. My goal is to express ideas, strongly bound to written, spoken and visual language, and restrict myself as little as possible in “style issues”.

3:AM: What are your thoughts on concrete and visual poetry now? Is it still a movement producing it’s best work? Is it a vital community or are independent poets maintaining the best of the tradition?

AK: I think that visual poetry, after a surge in the 50s and 60s, stagnated somehow (with some exceptions) by the end of the 20th Century. Thanks to the Web a lively community has been formed in recent years. Due to the fact I consider “Visual Poetry” as a hypernym, the styles and expressions of individual artists differ very much, but I believe that all have the common goal to take this art form to the next level. The new chances provided by social networking, the innovative possibilities of computers and the Internet in general open up new dimensions for the artists and especially the visual poets.

Let me give you some examples of current developments:

At the beginning of this year, an anthology of visual poetry, The Last VISPO (1998-2008) edited by Crag Hill and Nico Vassilakis is to be issued in the States. It will be a huge and unique insight into the work of more than 130 internationally working visual poets (including mine). This comes as something very special, because on the one hand, the editors carefully selected the poems from several years and on the other hand it’s only the second anthology of its kind in recent decades.

From my personal experience I can say that visual poetry is being well received through new media and is continuously re-discovered. My work, discovered on the net, appeared in various schoolbooks in Germany, but also in scientific works in Germany, America and also in Poland. Recently I had a nice contact with students from Uzbekistan, who discussed my work at the Goethe Institute.

Artists, such as the much appreciated Jörg Piringer, who also lives in Vienna, continue the tradition of visual and sound poetry, now in a completely new terrain. Piringer merges digital-, visual-, interactive- and sound-poetry and transfers the individual elements to the computer, performs at festivals and invents brilliantly witty iPad “games”.

I think there could be a new discovery, almost a renaissance, of visual poetry and I am convinced that the potentialities of this movement are far from exhausted.