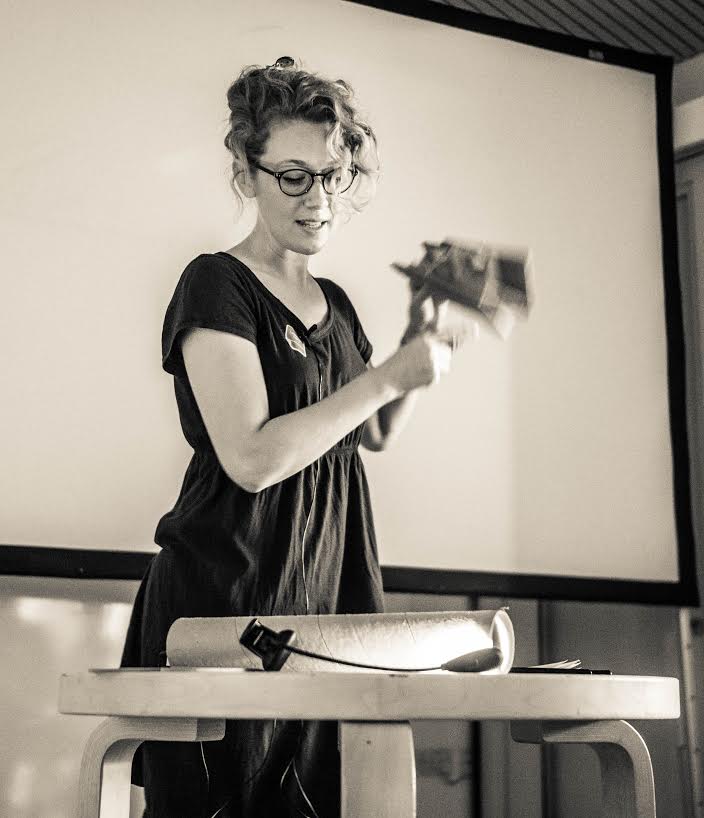 Perhaps other than the rarefied skill of performance, originality might be the hardest attribute to find in contemporary poetry. The ability to engender an audience to one’s work without appearing reluctant or melodramatic or trite is a trait often located in the poet’s personal dedication and consideration. Originality is perhaps harder to explicate, given the nature of its newness. These characteristics are what define the work of Holly Pester, and the experience of seeing or hearing her perform leaves an indelible impression on the viewer that they are witnessing a deeply gifted poet, one who it would seem will lead the way in the UK in the near future and beyond. Her work is incisive and wise, unpretentious and yet extremely sophisticated. She is without posture or affectation and still her urbane performances entrap and captivate audiences, their exploration of tonality, voice, volume and sound forcing a profound concentration on the potentialities of everyday language, whether that is a potential for oppression or amusement. Truly representative of what we hope to advocate in the Maintenant series, the 46th edition of the series – Holly Pester.
3:AM: How would you define your poetry? Naturally certain genre divisions are irrelevant but it often seems the mediums of performance art, avant garde poetry and avant grade music blur in practise but not in the way people understand and maintain their practise?

Holly Pester: People can get either defensive or carried away around labels. I dig ‘em. I like thinking up new ones that mix-match media; Speech Poetry, Voice-driven Poetics, Intermedial Sound and Performance Poetry. But I’m not scared of just ‘poetry’. That’s mine too. ‘Avant-garde’ seems to be used quite territorially, in antagonism to the ‘mainstream’, like laying down the battle ground. And I’m guilty of using it in that way. But it is originally a military term so I suppose that’s fine. I’m wondering if you mean that there’s a discrepancy between the doing of avant-garde/experimental cross-genre practices and the reception or categorisation of them? I think the blurrings, the cross-overs, the intermedias and the hyphenated labels are important to both, as long as they don’t get stuck. They’re something that need to stay transient – and naturally seem to – for the sake of the work and its connectivity.

3:AM: What are your thoughts on this seeming divergence between art / music / poetry that often seems to appear entwined in actuality but not in people’s conception?

HP: I think – this is contentious – that it’s often the music and visual art disciplines that don’t seem able to grapple with poetry in a way that does the intermedial justice. Whenever (not without exception of course) I see the music or art world (I’m probably talking pretty establishment stuff to be fair) working with poetry it always seems like a flat appendage, and not dealt with within its own terms or mechanics. ‘Poetry’ as a generic wet wipe is imported in as if it’s enough just to have it present. This is a bad example but recently I heard Brian Eno talking interestingly and excitedly about working with a poet and developing music with poetry – what he meant was a piece of typical Eno music with some rubbish poetry read very much in the background. Why can’t a musician with expertise in the technologies of sound be able to engage with poetry on the level of its structure and aurality? Also, I’ll be interested to see how the art world allows the reach of Susan Philipsz to open up an engagement with voice and orality. Yeah but this is all establishment and not really relevant… maybe.

Although there are some very interesting areas opening up between sonic arts and poetry, and art writing and poetry, but that’s something I hope will unfold very gradually – I don’t think it will do those areas any favours to force an engagement with poetry.

3:AM: Performativity seems to be at the root of much of what you are doing. Was it natural for you to give speech preference over the page, if you are doing that at all?

HP: Yes that’s my medium, over language or page. I’m experimenting in the sound and shape of speech; its noise and its parasitic qualities. I work very much on the level of the everyday, and the throw away aspects of spoken language. I like the hilariousness in mundane speech acts and the comedy in performative speech. Any political violence that reveals itself behind the word is quickly offset by incongruity, banality, silliness. Maybe that’s because I’m not bold enough yet, or maybe because I’m audacious enough to make that my playground.

3:AM: Your work forces the audience to re-establish their focus continually throughout your reading. The variability and specificity of pitch, diction, volume conveys so much and yet the words you utilise are disarmingly immediate. Is this something you have tailored closely, or experimented with?

HP: That’s absolutely something I’m experimenting with – the aural colouring of speech and how that affects meaning or poetic operation. Maybe that’s my contribution to Sound Poetry. It’s also about the event of speech and the eventing of the score. That aspect of live performance is important to me. It’s a lot to do with sacrifice, you have to sacrifice poetry to a persona, which is potentially ‘bad’, you sacrifice yourself in the same way a clown might, and – on a more ontological level – you sacrifice textual meaning to present sound.

3:AM: How did you work actually evolve? Did you begin writing certain forms of poetry and change drastically?

HP: I’d like to think I’m developing but I s’pose the character of my work hasn’t really changed… or, I’ve stayed true to the concerns that got me into poetry; performativity, comedy, Dada, orality, folk. It’s always been driven by a sense of wonder of the phenomenology of words in conversation. I haven’t really been writing poetry that long – in contrast to a lot of people ‘on the scene’. I was never that teenager breaking my heart over scrawlings in customised note books. I’ve never formally studied poetry – my educational life was focussed on Art and Art History. Poetry, literature, philosophy was in the climate of my family home but it wasn’t my thang until I was about 23 (7ish years ago). I started reading surreal snippets and little handmade books in rooms above pubs, more like a stand up comedian than a poet. And that was the kind of audience I had, drunk open-mic types. Then I did an MA and my tutors (the wonderful Peter Jaeger and Jeff Hilson) introduced me to these people called stuff like Hen-ri-Cho-pin and Bo-ob-Cob-bing…..O-Sulli-van….and the big hit… Berg-vall….

3:AM: How do you develop your poetry? What is your working methodology? Do you begin with a small idea and expand or do you work in bursts where whole poems are completed and finished…?

HP: No bursts. Maybe one burst at first and then it’s like getting very stubborn blood out of a really hard stone. Returning to it and then being shamed away and returning again until it starts crystalising. I think I have to catch myself off guard before I get into any sort of flow. Like Cixous’ distracted writing. It’s not until the very moment of delivery, when I’m about to open my mouth and read in front of an audience that I realise if the text is viable, do-able … anything. A bit like leaping off a cliff and realising your new flying invention is just some bin bags. (Or a snazzy propeller machine.)

3:AM: Could you outline your research at the contemporary poetics research centre at Birkbeck college?

HP: Yes, I’m basically researching/devising new languages for Sound Poetry, within the theoretical concerns of the archive, media and (analogue) sound. My project title at the moment is ‘Speech Matter: Sound Bodies and the Archive in Intermedial Poetics’, so it’s about speech in sound poetry and how the body and the archive inform it. It’s also aiming to update Dick Higgins’ ‘Intermedia’ in the contemporary cross-sections of digital and analogue – something pretty pertinent to Sound Poetry. It’s practice-led so I use my practice as a laboratory for ideas, rather than demonstrating. The theory and the practice aspects are mutually workshopping each other.

3:AM: How did you become involved in the Voiceworks project? What are your thoughts on the effect of the project on your work?

HP: I took part in the project first in 200… and then again the following year; invited just through my affiliations with Birbeck Poetics Centre. It’s such a wonderful project, I think all the poets involved go through a giddy excitement first of all. It’s like being introduced to a Martian and told you can hang out and learn about Mars from them. The influence it’s had on my work is pretty significant. It has introduced me to this strange new world of contemporary composition – and shown similar points of lineage with the poetry I draw on. Music and composition are now there on my clipboard as things I can go to (metaphorically and literally to concerts) and encounter. It’s also given me the notion that as a practitioner, collaboration is the most positive and productive things you can do – although it’s not always easy and that giddy excitement comes and goes…