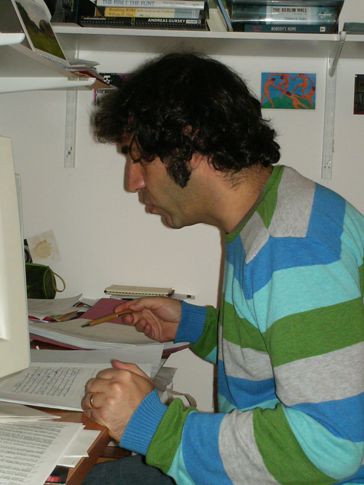 A scrupulous and gifted writer, Christodoulos Makris is a poet of language over territory, a poet of semblance over culture. Twenty years removed from his home nation of Cyprus, he has developed a reputation in both the UK and Ireland, his current place of residence, as a vital and astute poet. In a generous interview he discusses his knowledge of the poetry scene in Cyprus given its political constitution, how his own work is conceived, and how it has grown in the country he has chosen to live. In the very first Maintenant interview of 2011, we present Christodoulos Makris.

3:AM: Divisions in language or heritage often define radically different poetic traditions with the confines of a single nation. With Cyprus this division appears objectively overwhelming, is this reflected in the poetry of Cyprus?

Christodoulos Makris: The Cyprus I grew up in was defined by absolute divisions. For three decades there had been minimal contact between north and south, let alone a cross-pollination of ideas or poetic influences. If anything, each community withdrew into itself, into its traditions and suspicions, and defined itself in opposition to the ‘other’. With the partial opening in 2003 of the borders dividing the island this has begun to change.

I left Cyprus in 1991 and have not returned for more than a couple of weeks at a time. My artistic awakening happened during the decade I lived in England, though my formative years in Cyprus and my first language constitute part of my poetic sensibility. These days my connection to the affairs of Cyprus is rather slack, though I do take a little more interest in the art and poetry that happens there. I will try to answer your questions as best I can.

3:AM: Does there exist a poetry that is Cypriot, lying, even if partially, between a Turkish Cypriot poetry and a Greek Cypriot poetry?

CM: I am wary of descriptions of poetry in terms of its nationality. For me, ‘Cypriot’ poetry – or poetry of any nationality – does not strictly exist. What exists is poetry by poets who may have been born in, are living in, have at one time lived in, or have some other relationship to, the island of Cyprus. Their concerns may overlap because of landscape, climate, history or politics, but I prefer not to view these overlaps as defining of the work.

Language, however, is a different matter. It seems to me that the language(s) a poet lives in, whether through the random occurrence of birth or by choice, play(s) a crucial part in the work (s)he produces. In this sense there is huge scope for poets related to Cyprus in making use of the languages that have passed through the island over the centuries (Greek, Turkish, English, Arabic, Armenian, French, Italian, Russian et cetera) and which have left more than a trace in its dialects.

3:AM: Do the two interweave in a beneficial way? Does the poetic tradition of both cultures, as fluid as poetic culture is, excerpt its influence over the other? Or is a harking back to the home culture for both sets of poets?

CM: Again, I find the term ‘sets of poets’ problematic. Putting that aside, any kind of interaction would be (poetically speaking) beneficial: even the most reactionary poetry, or one that lives within or feeds off the narrowest of horizons, ought to be of some interest.

There is the kind of poet who calls himself or herself Cypriot and who will work from within the official culture and language of either Greece or Turkey. I would suggest that what unites these poets is a sense of lost or threatened entitlement. But there are others who employ the Cypriot dialect of either language to engage with local concerns. And there must be some who make use of the raw material that the island supplies to write in their own way.

3:AM: Are poets read across this boundary, by all Cypriots?

CM: Some years ago the ‘Mall of Cyprus’ opened with great fanfare on the southern outskirts of Nicosia, and included, to the shock of many, a brand new bookshop. What shocked even more was that during the opening celebrations this bookshop was full. It soon became apparent that people were rushing in for the gadgets the bookshop chose (wisely?) to stock alongside its books.

This anecdote was relayed to me as an illustration of the general lack of concern with the written word. There is strong interest in handicrafts, as evidenced by the many workshops dotted around the place, and in music. Whenever I visit I go hunting for fliers and posters and scour the arts listings, and find that the overwhelming majority of what goes on has to do with live music, with maybe a little bit of performance or visual art thrown in. Whether this is due to climate (which encourages people to interact in open and uncontrolled spaces) or the impression passed on to the younger generation in particular that poetry should only deal with loss, nostalgia, division, war et cetera, there appears to be, much like elsewhere, an indifference to poetry as a relevant artistic discipline – which places the onus on younger poets to redefine what poetry out of Cyprus could do or be about.

3:AM: Is there a distinct Greek influence in the contemporary work being produced by younger Cypriot poets?

CM: Related to the increasing prominence of the official ‘home’ languages has been the tightening of links to Greece and Turkey through advances in broadcasting. Several Greek TV channels now beam into southern Cypriot homes – and I imagine an equivalent development to have happened in the north. The availability of British, Russian and channels from other regions to various long-term visitors makes for a fascinating multilingualism…

But the cultural concerns of (the majority of) the population have tended towards those of either Greece or Turkey (or Russia or Britain…). This appears to have led to the marginalisation of dialect: young Cypriot poets writing in Greek largely employ the idioms of Greece. The presence of a larger market must surely play a role in this. Again, I imagine the same to be true for poets writing in Turkish.

3:AM: Is there an avant garde or experimental poetry scene?

CM: I have noticed a tendency towards experimentation in music, and in the visual arts. This has much to do with the fascination with new technologies (there are a lot of technologically savvy people working in Cyprus). Poets writing from what might be described as avant garde modes are rare. With the emergence of a new generation of poets, whose concerns are shifting away from the trauma of war and towards wider human questions (aided by the easier movement around Europe since 2005) the reasons keeping an experimental poetry scene from thriving should be starting to fade.

3:AM: You have established yourself in Ireland for sometime, how has the poetic community and poetic aesthetic of the country affected your work?

CM: It seems I’m happier writing away from, rather than towards, something. I arrived here at the height of the ‘Celtic Tiger’ and therefore into an awful lot of smugness, which didn’t mix well with the country’s inherent parochialism and insularity. The smugness seems well and truly smashed now… A lot of the poetry written in Ireland appears far too preoccupied with the idea of ‘Ireland’. It places huge emphasis on place in rather territorial terms. And there’s generally an aversion to experimentalism. Poetry that uses ‘unpoetic’ language or plays around with convention is looked upon (at best) as an entertaining oddity. With few – but striking – exceptions, the ‘scene’ is dominated by a small number of established organisations which have an interest in maintaining the status quo.

After some early doomed attempts to conform, I have moved on to trying out approaches that bear relation to our larger environment and goings on. I am happy to cite the interrogative practices of much of contemporary visual art as an influence. I often write what might be termed ‘dramatic monologues’, which I prefer to call ‘persona poems’ in a bid to highlight the question of who the speaker might be and why they might be speaking. I increasingly make use of found texts. I have also started to play around with form and how the poem looks on the page, and I like to shift between registers or languages. These are not new ways of writing poetry: but refusing to stick to any one, and remaining on the lookout for the approach that suits the material I’m considering at any time, brings out a sort of pluralism which I feel reflects many people’s relationship to the contemporary world – mine included.

3:AM: You appear to work from lyrical modes, not versed, but anecdotal perhaps. How does your writing process work? Do you begin from the germs of ideas, of images, or lines in fact?

CM: Yes, lyricism is present in my work. Narrative has also been important, having started out many years ago writing novels and short stories. But I have recognised a steady distancing from these modes – without abandoning them altogether – in favour of more conceptual and language-driven aspects of composition.

I would begin from anything that appears worthy of a poem: it might be something somebody said, something I have read, the etymology of a word… Often an idea will play in my mind until I recognise a valid way to treat it. Other times poems just appear, nearly fully-formed. Sometimes I will chisel a poem out of nothing. There’s nothing I rule out – or in.

For the past year or so I have been working on a sequence examining differences in meaning and conception between words, phrases or linguistic conventions in English and their direct translation to/from the dialects of Cyprus. This feeds into a collection of poems through which I present an ongoing clearing of the throat – the spittle that has to be ejected so that the poet can continue speaking, perhaps with a little more clarity. This project, with working title Spitting Out the Mother Tongue, is due for publication in book form some time in 2011.