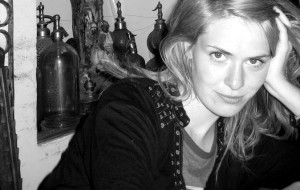 For the third interview celebrating the third Maintenant reading of 2010, “Nýr Skáldskapur – Icelandic/British poetry”, we present Bryndís Björgvinsdóttir. Pugnacious yet mature, her poetry is full of guile and wit, and freely holds satire within a trenchant, valuable social critique. Her poetry is immediate too, unpretentious and never does her work appear indulgent, but rather genuine in its motivation and tenor. A folklorist as well as a poet, her first collection book of poetry, Ég hata alla! (I hate everybody!) was published in the summer of 2009 and her collaboration with the poet and intellectual Scott Thurston will be read and then published as part of Maintenant’s Icelandic poetry program. In a frank and insightful interview, we present the 37th subject of the Maintenant series, Bryndís Björgvinsdóttir.

3:AM: You’ve stated that you might write poetry purely because you see it as one of the few remaining legitimate artistic forms ofprotest, or perhaps protestation is a better word, or just general criticism. Is this true?

Bryndís Björgvinsdóttir: I believe that all forms of art have the capacity for protest – if people feel like it. It just happens that I’m quite useless at all other forms of art. I don’t know if I would describe my poetry as a form of protest though (or protestation), they are more like comments on things I see (and like or dislike). Sometimes it feels like even just pointing out the plain obvious is then received as some sort of extremism; in that sense my art is a form of protest, sure.

3:AM: Are you aware of it when you write, or is your process must naturalistic? Do you just write from inspiration and then your own sense of protestation emerges in the work?

BB: I’m often come inspired by things I dislike, so the protest is inseparable from the inspiration, it even comes first, in a way. My thoughts are not separate from what bothers me out there – in that way the context and the content is always somehow social. Some people probably find me boring, pessimistic, anxious, worried, dreadful and too highly aware of the wrongdoings in the world. which can even be the case at times. I sometimes enter joyful conversations on design, cuisine, entertainments, space, time, unicorns and rainbows and completely ruin them with tales of traumatic events or political agenda. But, you know, I don’t think people who are preoccupied with the world in that way are unhappy – or even pessimistic – however full of misery their discourse is. I’m a rather light-hearted optimistic sort of person, truly. I’m even quite happy. In the end I tend to be the happiest and most optimistic person in the party.

3:AM: Would you consider your poetry political then, or ethically motivated?

3:AM: Do you see poetry as a medium in which the poet can somehow balance a feeling of fundamental discomfort or displeasure, that it can act as a release of dissatisfaction?

BB: Charles Bukowski said something like “writing is like taking a shit”. You just do it to get rid of it; to release some kind of banal discomfort. To get back to the politically motivated thing: Once in a while I get ‘fed up’ by the state of things in the world and need to relieve myself.

3:AM: Your work seems shot through with humour, perhaps not satire, but a quixotic, sometimes brutal immediacy and aberrant…

BB: The world is brutally immediate, aberrant and indeed funny. I feel like the language and methods I use is appropriate for the world I see – of course, otherwise I wouldn’t use it.

3:AM: Do you read alot of poetry? Both Icelandic and otherwise? Who influenced you when you began writing?

BB: I don’t read a lot of poetry. I tend to watch a lot of (stupid) videos on sites like Youtube: That could explain where the banal influence comes from. I get influenced by conversation, going out, listening to people talking, going to the shopping mall, working really boring or hard jobs, reading newspaper articles and so on – but of course I like poetry, and conversations on poetry. Well, indeed my friend accused me of “liking” everything to much the other day; I tend to get quite easily interested in everything and influenced by the most trivial things. My earliest influence is probably the Icelandic educational system.

3:AM: I’m interested in your feelings towards contemporary conceptions of Iceland, of it’s music scene, its geography, its image as a unique artistic culture.

BB: The idea of genius is a plague in Iceland – a sort of plague. Artists rarely pose as even capable of speaking about their work, the context, the consciousness behind it – their intentions. Many great musicians come from Iceland. They are probably the artists who are most outwardly visible. But somehow it is far more common to relate their talent and their work to the country’s nature – the highlands, mountains, geysers, purity of water – even, quite racially, the the viking genes’. What rarely gets any mention at all is that through the 20th century a network of music schools was established around the country, enabling almost anyone, from any class background, to learn a musical instrument, basic notation etc. This tendency, to romantically ignore the actual realist premises for art make me somewhat reluctant to speak of inspiration. I’d really rather speak about the context my poems are made in, and so on. But I would be lying, though, if I posed as a concentrated craftsman, in my approach to poetry. My poems grow rather rapidly. They grow, however, within a context, of course – involving thoughts, an ongoing dialogue, social consciousness, political events – and are completely dependent on these factors, as well as my education and so on.

3:AM: Could you detail the process of your collaboration with Scott Thurston?

BB: After you put us in touch with each other Scott sent me a piece of his work. I worked on a response to that for a while, sent it back to him and then we exchanged responses to each others work via e-mail. It was interesting and challenging because his work is quite different from mine. I had to reach into other directions than I’m normally comfortable with in order to find ways to combine our stuff into one piece. I learned a lesson working with him somehow: I had to think a lot – work hard for once. He forced me somehow to stop shying away from writing something different than ‘humorous aberrant propaganda’.