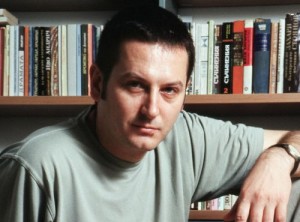 The pre-eminent man of letters in the Bulgaria of his generation, Georgi Gospodinov is an internationally renowned novelist, essayist, social historian and poet. His is a voice synonimous with a Bulgarian literary culture that knows its history and will not forget or leap blindly into its future. His “natural novel” has been published in ten languages and launched him onto the international scene as a novelist, but in his own right, he is a formidable and agile poet, writing droll, politically astute and incisive poetry. For the 36th edition of the Maintenant series we present Georgi Gospodinov.

3:AM: It appears you have come to represent an entire generation in your poetry and internationally, with your prominence as a writer. What is it about your poetry, do you think, that has led to this repute? Do you hope to represent a feeling that might somehow reveal and record the feelings of a generation?

Georgi Gospodinov: I was born in 1968 and I like, be it ironically or seriously, to say that a person remains forever in the year of his/her birth. We carry this year with us, we “remember” it in details and somehow it determines our lives. For the people of my generation (let’s specify that “generation” is a rather conditional term, I use it in the sense of a special community sharing common memory, especially for small and perishable things, smells, tastes, songs that were popular for one season, etc.), I think there are two important years. The first one, 1968, is more the unspoken, unhappened year for Bulgaria. The second one, 1989, when the communism collapsed unexpectedly for all, had to compensate the unhappened 1968 in which we (our parents) were too quiet and obedient. In my poetry, especially in The Cherry Tree of a People, the central theme is the importance of the things that have never happened to us. And it seems, the book managed to give voice to a feeling representative not only for my generation. The book came out in several editions which is not typical for poetry. Yet I have never written poems with the idea to represent any community. My books are too personal, but exactly the personal turned out to be universal and infectious.

3:AM: You have a tangible relationship to the recent political history of Bulgarian and the communist regime from the mid 50s to 1989. What was your personal experience of the events of 89′? You were 21 at the time, I am correct? and did your creative output, your poetry specifically change in its publication and content?

GG: Yes, 1989 biographically split my personal story and the stories of people around me. Half of my life, my childhood and adolescence, passed in the times of the communist regime. The end of our education coincided with the end of what we were educated for. It was a terrific time, I felt like part of the big carnival, of the feast. These were my first years in the university, and I spent most of my time outside in the streets, on the meetings and demonstrations. I remember clearly the very first one, it was a week before the collapse of the regime on 10 November. I will not forget how our bodies were afraid, the fear was in the muscles, in the bones. Our bodies didn’t have any memory of protest. Nobody had protested in Bulgaria for half a century. It is a very strong feeling of overcoming the fear, how something cracks, how you learn to be free step by step.

A similar feeling for freedom penetrated into literature as well. What was happening with our bodies happened at the same time with language. We were 21, with the whole possible naivety and belief that we were changing the words and they were changing us. With a few friends of mine we began to do some of the first literary performances, we played with the tradition, dressed up like key figures from the literary canon from the turn of the 20th century. It was rather scandalous back then, now it seems innocent to me. All of it must be there in our books. In fact exactly the poetry was the leading genre of the 1990s in Bulgaria, of that first carnival decade, full of energy, harsh and joyful.

3:AM: How did I’ve Lived Socialism. 171 personal stories (2006) and the Inventory Book of Socialism (2006) come about? Did you always envision creating and collecting sources of information from this time?

GG: First, the theme of the recent past was quite important for my Natural Novel and then for my book of short stories And Other Stories. There are a few “lists of pleasures” of the 1960s, 1970s, and 1980s in the novel. They appear as a catalogue of the everyday life of that tmes. Later I realized how quickly we began to forget, quite consciously by the way, how we began to lose the “warm” memory and didn’t think over what we have lived through biographically, not only historically. I made the two projects with friends, they were private, independent undertakings. We wanted to hear personal stories about that time. And that is how I’ve Lived Socialism came about. Quite unexpectedly, people decided to tell stories. Simply nobody had asked them before. In the Inventory Book of Socialism we did something like an archive, catalogue, small museum of everyday life objects and belongings from the communist time. Both books proved to be very opportune in Bulgaria.

3:AM: Does a sense of nostalgia or indignance pervade your feelings of the pre-89 regime?

GG: I work a lot with nostalgia in my books. And this theme is really important for the feelings of most of the people in the post-communist countries, for their attitude towards the past. Of course, I could not feel any nostalgia to the communist regime. I could be nostalgic to my childhood inspite of the regime. We should carefully separate the two things.

3:AM: What is the inflence of Nikola Vaptsarov on your work? Do you consider him to be Bulgaria’s greatest modernist poet?

GG: My Ph.D. thesis was on Vaptsarov’s poetry. For a long period he was interpreted one-sidedly, through the reading-glass of ideology only as a big communist poet. My attempt was to read him through cinema, radio and ads, through media-cultural context of the 1930s and 1940s when he lived. I like him also biographically, he was too lonely all his life, and posthumously as well. The first poetry book given to me as a present by my mother was with his poetry. I wouldn’t call him Bulgaria’s greatest modernist poet. I would put him in the group of other great Bulgarian poets as Yavorov and Geo Milev.

GG: My first poetry book, Lapidarium, gathered very short poems, sometimes of just 2-3 lines. I remember writing many them on the back of bus tickets. It was lucky that the book was noticed. Then the Cherry Tree of a People followed, it required that specific mix of personal and national history, gathering irony, nostalgia, pop culture and desires of the 1960s with local archetypal dreams and reveries. Later, in Letters to Gaustin and Baladies and Maladies, the poetry became more open to outer, European spaces. But what seems to me unchanged in my writing from the first poetry book on is the attempt to keep it personal and to tell stories.

3:AM: Is poetry a vibrant part of Bulgarian artistic culture? Is there a sense that the average person reads and follows poetry?

GG: As I said, it was the genre of the 1990s. Everything important about the language happened in the poetry then. Now, naturally, the great desire of all is to make novels. There is something which I call, a bit ironically, “will for novel”. A good thing we try to do is to bring out poetry to more unexpected places – readings on the street, at clubs, open markets to provoke the interest of an audience which otherwise hardly would find time for poetry. Often “Literary Newspaper” is the initiator of such happenings.

3:AM: What are your aims with Literaturen Vestnik? Do you promote new poets, authors?

GG: “Literary Newspaper” started as a new democratic weekly for literature in 1991 with a very good energy and little money. Through all the years of crisis it managed to survive and to be the starting point, the workshop for the young poets. We also made our debut there. The paper has a very special way of editing. The editors take turns each of them making his/her own issue and deciding what to choose, what theme, texts, politics. So actually there are 7-8 alternating Literary Newspapers. There is a certain charm in this anarchy. It is quite a luxury to have a weekly for poetry and fiction. Part of the editors are university teachers, so their connection with the young people comes naturally. But the best Bulgarian writers form different generations publish their works in the paper as well. If somebody wants to make archeology of what happened in our literature in the last 20 years, he/she should simply leaf through the pages of “Literary Newspaper”.