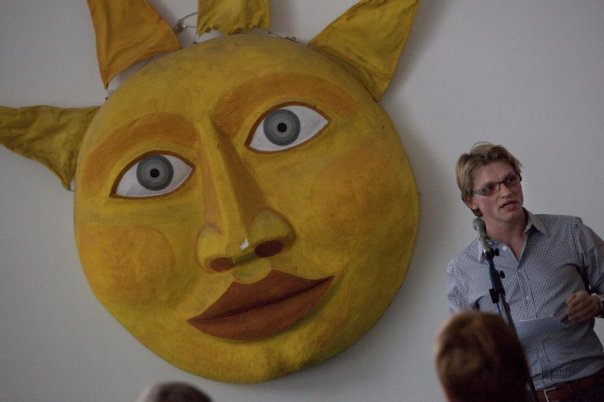 Scandinavia is a heartland for some of the world’s most exciting and innovative poetry. At the centre of the Danish scene lies the indomitable presence of Martin Glaz Serup. A gifted and prolific poet, his expansive, inclusive poetry shows a consistent engagement with the incisiveness of a collage methodology when wielded by a commanding and assured voice. An able and reputed critic and children’s story writer too, Serup’s work is renowned across Europe and the States. As well as the poetry accompanying this interview, Serup has also made available his latest work, entitled THE FIELD, not yet published in Danish, but released here by ubu editions here. For the 30th edition of Maintenant, we welcome Martin Glaz Serup.

3:AM: Tell me about the work in the The Traffic Is Unreal (2007)? The work appears to utilise a colloquial familiarity, but doesn’t inhabit a characterised or satirical voice, rather an off-beat, deliberately non poetic speech to directly approach the language venerated by the media.

Martin Glaz Serup: The long poem The Traffic Is Unreal consists of not one voice but a variety of voices. They are gathered, more or less, by a thematic principle – the book, as I see it, is very much about synchronicity; love and politics. How everything is interrelated and is happening at the same time; love, politics, what’s going on in Japan etc. I would very much like this poem not to appear as confessional, even though it’s anchored in what appears to be a solid first person narrative, with a history and a temperament. I wanted not one but several voices, several angles, like a kaleidoscope, I wanted real correspondance between different views, different persons and different times. I tried to achieve that effect in the text by using a lot of direct quotes, but without making it clear to the reader where we’re reading a line from Pentti Saarikoski or Charles Baudelaire or Deng Xiaoping or ‘me’ for instance. That way I have to take the quotes seriously, by, somehow, making them mine and responding to them in the poems as if they were mine. Instead of trying to make up or imagine what other people might think, I used other peoples thoughts. I hope and think that you can sort of sense the shift in tones and that they indicate small shift in the context of history, social belonging et cetera, making the poem more, if it’s possible to use that word, dialectical, open and ‘alive’. Maybe. I don’t know to what extent it’s doing the same in the English translation, it’s difficult for me to hear.

3:AM: Has your work changed distinctly across your six collections? Naturally its subject matter would shift, but has your methodology / your typography / your conception of poetry altered heavily in that time?

MGS: My first reaction would be to answer loud YES, but then again: when I think of it and look at the six poetry books I’ve written from The Face of Shyla (2002) to The Field (2010), they also seem to have something in common; an interest for what you could call the indivdual and the political macrostructures, how they interact, what is political etc., an interest of gender, an interest, somehow, in the concept of authenticity and in context and situation, for instance by using appropriating-strategies in my work. So the anwser to your question? The later books are very different from the earlier ones, I think, but at the same time… The answer would be: yes and no.

3:AM: Certainly in countries that were once under the guise of fascism and dictatorial-communism the resistance that finds its voice in the language of poetry is against capitalism, or capitalist excess. Are you pursuing a political mean in your work? Do you feel poetry has a responsibility to engage in concepts beyond its own language?

MGS: I don’t think poetry as such should be obliged to be resonsible for anything at all. That doesn’t mean that it can’t do all sorts of things, but no one should demand a specific thing from it. That’s one of the few places we have, poetry, art, where you don’t know what to expect, where anything can happen and where you can experience also the well known from a surprising and entirely different perspective than the usual.

3:AM: A grand figure who seems have shared interests with your own oeuvre is Inger Christensen, methodologically brilliant as a poet and venerated as a children’s story writer. What is her influence currently in Danish poetry, and on your own work?

MGS: I’m not directly influenced by her work myself, even though… it’s difficult not to be. She’s really good and for obvious reasons extremely important and not only in Denmark.

3:AM: How does your teaching at University of Southern Denmark and The University of Aarhus impact upon your own creative process? Is it generative – through the perhaps naïve impositions of your students, or their sophistication, or the repetition / reinstatement of material? Does it have no effect at all?

MGS: Well, difficult question. I don’t think I ever get ‘inspired’ by my student’s papers, not really. I do – however – often get inspired by what we read of theory and other writers and the discussions we can have on that basis. But the close reading I’m giving the student’s papers in order to advise them and evaluate their work kind of takes me somewhere far away from writing myself. I have actually just stopped teaching Creative Writing at both universities, since I’ve been lucky to get a position as a phd-student at the University of Copenhagen. I suppose that’ll give me more time for research and less for teaching the next three years, how that will affect my own writing I obviously don’t know yet, but in a productive manner I think.

3:AM: You seem to have attained a considerable reputation across Scandinavia for literary criticism, and your work with journals like Litlive.dk, Apparatur and Hvedekorn. Has journalism always been a concurrent interest with your own work? Did you feel there was a lack of sources for poetic criticism and poetry itself in Denmark?

MGS: I consider literary criticism to be an important part of literature itself. And we need to read the literature, to discuss it, to investigate it, in order for it to exist. To take it seriously as more than entertainment. The importance of literary criticism – an evaluation of the evaluation of life – is, I think, very underrated in Denmark right now. In papers etc. we see mostly consumer focused reviews advising the reader to spend money or not on or this and that. We need more close readings I think. More discussions of what the literature is about and not the least, how it’s ‘about it’. Also we need more poet-critics, I think, more writers – and not only academics – who want to engage and discuss these matters. What’s important. Why. And how.

3:AM: You are established as a children’s story author and though it would be reductive to suggest that this is not symbiotic with poetry, especially the kind of poetry you write, I am interested in how these streams of writing interweave in your writing process? Which came first, writing for children or poetry?

MGS: I’m always working on several projects at the same time – right now for instance, a chlidren’s novel together with author Hanne Kvist, a collection of poetry, a collection of essays, a prosebook for children. It takes time, but everything moves, slowly, at the same time. I try to go where it feels right, it depends on the kind of ideas and energies I have – and also very much on time and different kind of deadlines. My first book came out in 2002, it was a collection of poetry, the year after on the same day I published my second collection of poetry, Mayor God (2003), and my first childrens book SKRÆP! (2003 – in Danish, the sound geese make). So poetry came first, but on the other hand, the first literature I read was children’s stories…

3:AM: Do you think children are receptive to avant garde poetics, or could be? That is sound / concrete / speech or expermental free verse poetry?

MGS: Yes, definitely. I think that children often are even more receptive to these aesthetics, to the fun of it, the way to investigate the world in new manners, than many adults. I think the only non-sense poetry we have in Denmark, for instance, which is widely canonized is written for and being read together with children.