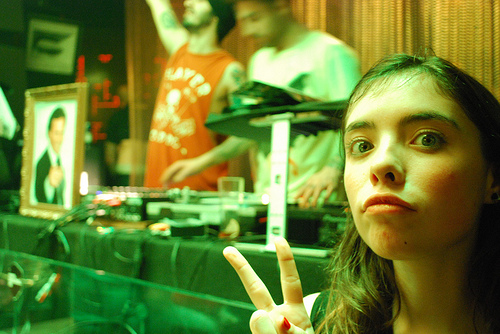 Though not an orthodoxy, one of the aims of the Maintenant series is to present poets who are truly representative of the next generation of poets emerging across the continent, that is poets who will shape the future of poetry and should be recognised as they begin to reach ascendancy in the English speaking poetry community, as they are developing, and not only when they have reached the acceptance that seems to come with a dampened middle age. So we present Luna Miguel, not yet 20 years of age and already creating a rich and vivid body of work. Ebullient, direct yet lyrical, instinctual, unapologetically youthful and explicit, she is widely regarded across Spain for her remarkable talent and unyielding presence. Undoubtedly she will be a force in European poetry for many years to come and as such, we are pleased to introduce her into the Maintenant series.

3:AM: What seems inevitable is a discussion about your age. It seems in poetry being ‘young’ is relative to other fields, in the sense a poet is still ‘young’ in their late 30s. At 20 are you becoming defined by the unusual nature of your age? Do people focus on your youth, and do you embrace or reject such temporal notions as the poets years on the planet being central to your poetry?

Luna Miguel: I think I’m not able to define myself in these terms. Many people don’t trust me since they believe that the stuff I have achieved are only related with my age. My only way to prove the opposite is working on and trying to do it as best as possible, always looking for being comfortable and doing what I want. I accept this notion about youth although I see it more and more distant because I have been publishing on magazines since I was fifteen. Moreover, now there are many people that are the same age and who write in a very interesting way. And this is the reason I don’t feel bad because I’m not alone: Enrique Morarales, Laura Rosal, David Leo García, Ruth Llana, Cristian Alcaraz, Javier Gato, Natalia Litvinova, Marina Ramón-Borja, María Simó, Bárbara Butragueño, Álvaro Guijarro… all of them are under 24. I gain a lot of hope from them and I trust their poetry. Young, yes. And so what?

3:AM: Releasing your debut collection at 18, in anyway do you think your notoriety, your reputation is sold on this fact, the unusual combination of youth and ability? Do you think it might allow you to have a uniquely long presence in Spanish poetic life or do you think people want to attach this label to you that might become permanent in some fashion.

LM: I agree it will be difficult to get rid of it, although every day I try to do it. A lot of people compare me with a sort of Lolita mixed with Rimbaud (and this can happen with good or bad intentions). I hate this kind of comparison, mainly because, as I said before, I am not fifteen. I am a little worried about all this because there are other authors the same age (for example, Elena Medel) who have also suffered this same situation. The most important thing in their work (and I hope it will be so in mine) is not the age but the quality, their ambitions and everything that’s expected from them. Youth is only an added value.

3:AM: Do you imagine your poetry will radically change over and again as your become older?

LM: I think so because it has already happened. If my poems were shorter and more cryptic in the past, right now they are longer, more narrative and in some way fascinated by the body. They will change, but in the mean time they might maintain a particular voice, I believe. Everything depends on my human experiences and, above that, my influences. When I was 16, I read Baudelaire but three years I read David Foster Wallace, a circumstance that obviously means some changes to understand and write literature.

3:AM: How does living and studying in Madrid affect your poetry? Are you a poet of the city?

LM: Madrid has become a very important influence on both my life and poetry. Before this, I lived in Almería, an Andalusian city at South of the South, and indeed I have lived in Nice, France. It’s is possible that in the time I lived in these coastal cities, my poems were more natural and open. Now I place them with closed and urban spaces, public transports and outskirts: absolutely urban, yes, but with some references to my previous contexts.

3:AM: What is your feeling to being a female poet in Spain? Is there a great tradition of poetry from women in the country, or are the figures of Spanish poetic history primarily male, for it might appear this way on the outside? Is there ever a sense of having to establish yourself in a way men would not have to.

LM: I’m afraid that being a woman and a writer is more difficult that being a man and a writer. It seems that readers expect different things according to your gender. Although a big tradition exists, it seems to be hidden, and I don’t know the reasons. For example, if you review the poets from the Generation of ’27 (Lorca, Cernuda, Aleixandre, Alberti…), you might ask yourself where the women are. Yet I haven’t read them because even in the University they are not studied. I can tell you some names of contemporary female authors such as Chantal Maillard, Clara Janés or even Julia Uceda. There are many more, but their books tend to go unnoticed. On top of that, anthologies of “Woman poetry” are always been published, but I don’t think it’s a different genre. But, sincerely, I read more poets from the USA and South America, for example, Denise Duhamel, Blanca Varela, Pizarnik…

3:AM: Do you feel the nature of the internet, the ability for anyone of our generation to access and proliferate material, is central to the future of poetry? Do you think poetry has begun to catch up with other media by using the net?

LM: I would say that poetry will be always marginal until it breaks with its forms and its more ancient references; however, I think too that despite its marginal personality, it goes further thanks to the Internet. The user can see the poet as a current person, and this familiarity makes the reader go with some kind of fascination to the work published on the net. It’s impossible to support today the idea of the author as a divine entity… If we want people to approach poetry, it would be better to delete the myths.

3:AM: You clearly engage in the utilising of a contemporary, perhaps postmodern poetic. Your work appears sparse but vitriolic. Are you writing from instinct, or are you deliberately trying to overturn the idea of a precious, ‘poetic’ language by utilising sexual and contemporary media references?

LM: I would say both things. I like writing from instinct. An instinct marked by ambition, corporal expression, reconstructed places and intertexts. I trust the evocation’s power of quote. All of us are made by quotes. Why poetry might be so pure?

3:AM: Where do you influences lie? In poetry, or in music – punk etc…?

LM: My influences come from my own experience and own poetry; also from music, narrative, movies and comics. But mainly narrative. I’m interested on fitting narrative scenes to the poem. Maybe my clearest influences would be Depeche Mode, Alejandra Pizarnik, Lhasa, Daniel Clowes, Trainspotting, Rimbaud, Anais Nin, Betty Blue, Antonio J. Rodríguez, Daft Punk, The Zombie Club, Cinque, Mallarmé, Disney… Everything. Everything that surrounds me is influence.

3:AM: Your poetry seems to combine elements which are truly both elliptical and metaphorical, and beautiful, and harsh, brash, immediate language. Are you attempting a synthesis of the two?

LM: It’s possible. As I said before, I come from a very lyric tradition: Baudelaire, Lorca, Paul Eluard… And later I discovered other works more contemporary but not necessarily from poetry. Eloy Fernández Porta, David Foster Wallace, Tao Lin… I’m also interested in literature of gender, and there are Virginie Despentes, Maite Dono… All this mixing helps me to join form and contents in a way sometimes calm, othertimes surly, depressed, but always trying to search for rhythms and the word’s strength.