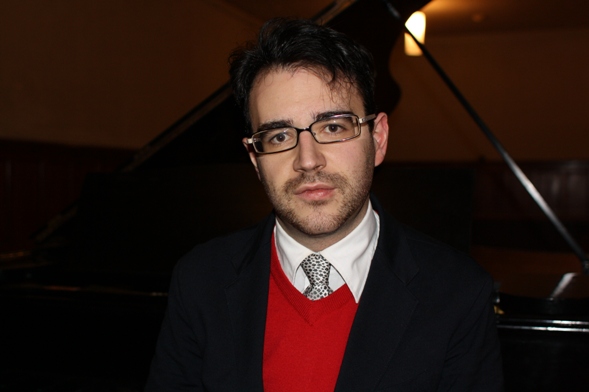 A voice of clarity, of rigour – the poetry of Juan Andrés García Román is a gesture in the direction of an oft forgotten project – poetry as a gift, as an acceptance of limitation, a gesture into the language we use to describe existence and experience. His tone is ethereal, graceful and somehow, beyond a justification, indelibly Spanish. As such, no one could begin the Maintenant’s series engagement with contemporary Spanish poetry better than Juan Andrés García Román.

3:AM: Your poetry seems lyrical, fluid and ethereal – there seems elements of fable, of a certain urbane mysticality in your work.

Juan Andrés García Román: I think modern poetry is extremely self-conscious. The Frankfurt lectures of Ingeborg Bachman are truly representative of that. She refers to the fact that nowadays a true poet wouldn’t be able to write without answering explicitly the question of the legitimacy of poetry. You are right when you mention the mystical tendency of my writing. Five years ago, I was really interested in metaphysical poetry. The difference between El fósforo astillado and that metaphysical bent consists of irony, a ferrous irony. But it would be a flagrant mistake thinking that irony is a phenomenon contrary to that metaphysical interest. It’s only a submission to it. None the less, the nostalgia of that knowledge persists.

3:AM: In context too, your poetry appears to be subsuming the form of a fragment, or poetic aphorism. There is a great play of motion and statement to the poems. How do you go about writing? Do you begin from lines, or images? Do you create many drafts?

JAGR: Celan’s writing is characterized by a fragmentation of the syntactic phrase, of the verse, of the image. It is from him and other members of the avant-garde (Arp, Schwitters, Jàbes…) where my tendency to write images comes (Ashbery called them “ideas”). When I write poetry I think about images and I think that the image (and not the poem) is the unit of what I do. However, I’m obsessed by the idea that the book itself is a whole intellectual proposal. I think that I move between those lyrical moments and the unity of the book, whose logic is almost narrative… And yes, I confess that my notebooks are full of those alone images or ideas, without context.

3:AM: You were born and reside in Granada, in the midst of a city famous for its great poet, Lorca. What is the presence of Lorca still in Granada? Was his work always surrounding you?

JAGR: The paradoxical reality, for me and for other poets of Granada from different generations, is that Lorca has become a highly respected figure but without children (Do the geniuses close themselves on themselves?), while other poets less prestigious and often foreign have become our true masters… Of course I have passion for Lorca. And his trend toward the surreal imagism is very in keeping with the poetry I like. Maybe living so close to him forces you to dissociate from his poetry for not being predictable. This is regrettable but it happens.

3:AM: Consequently you are an Andalusian poet, how significant is this regional heritage and identity to you as a poet? Are poets in Spain, Andalusian, Catalan, Galician, Basque etc. before they are Spanish?

JAGR: The Andalusian identity is very beautiful, yes, and sometimes you would like to declare yourself a passionate regionalist or even a nationalist, but with regard to literature I think that you cannot talk about Andalusian poetry moving away from Spanish poetry or rather the reverse. Because nearly all significant poets of the twentieth century are Andalusians: Lorca, Cernuda, Juan Ramón Jiménez, the Machado brothers… and so almost from the beginning: Herrera, Góngora. If you remove the Andalusian poetry from the whole, the whole becomes just a minority…

3:AM: Is there a sense of exchange between the poets from different regions, utilising different languages and forms?

JAGR: No, linguistic minorities tend to become entrenched in Spain rather than offer themselves as alternatives of richness. What does exist is an openness to international poetic dialogue. But I don’t know if that is positive or negative, an enrichment or an impoverishment. I am very sceptical. In general, I am glad that Spain has opened its reading horizon to democracy. However, the coexistence of divergent aesthetics and poetics remains very problematic in the case of poetry. Unfortunately nobody has been able to show that the greater democracy is, the better poetry will be…

3:AM: You are an Ingeborg Bachmann scholar, as well as an experienced translator of German texts, including Rilke. How did your interest in German poetry begin and develop? Did you have the language from a young age, or did you consciously work toward being a German translator?

JAGR: In Germany I learned to fend for myself, although I unlearned it later. There I got older. But it wasn’t a contingency. It always seduced me and I decided to make there a course of my studies. However it’s not entirely true, or not true at all, that you can read a country. The Germany I read in books wasn’t the Germany where I lived or where I live now. I would almost say that the fictional Germany survives better on its periphery: Austria, Switzerland… Rilke would find himself so definitely lost in the current Berlin… I think that he could not stand it.

3:AM: Bachmann is an incredible poet, and someone’s whose reputation seems to be far larger in Europe, especially Austria and Germany, than it is in England or America. Why do you think this is the case?

JAGR: In all honesty, I think the overwhelming popularity of Bachmann in Germany is due more to her work as an intellectual and even an ideological activist than to her work as poet. Her poetry is great but it is her membership in the group of 47, her breakaway attitude, her biography, etc., what has become famous. And this is a huge drag on the understanding of her fine work.

Regarding your question, it strikes me that the dialogue with the French post-structural feminism made possible the transfer to France and then perhaps the spread to Italy and Spain. It occurs to me that answer, but the translating and publishing market is the most capricious possible.

3:AM: The letters of Bachmann and Celan have just been translated and published in the UK, to significant acclaim. What was your opinion of them?

JAGR: It is impossible that the dialogue between Bachmann and Celan is not a major event of the letters. Bachmann had many literary fondnesses, but the vital figure and the work of Celan obsessed her as no other living writer did. It was a debate in which they were put on the table and they faced the silence of Lord Chandos and the (prof)ethic babble: to mute poetry or the silence into poetry; a certain Heidegger or a mystical thought but antitrascendental; utopia or suspicion; classical or hermeneutical modernity… And best of all is that, although we can allocate each position to one of them, sometimes the tables are turned, or they share them. They were night and eclipse. And they loved each other.

3:AM: Her concern with the latency of fascism in the Austro-German proto-bourgeois society is still a valid poetic focus now, I believe, with elements of racism, repression, capitalist reduction rife in cultures across Europe. Do you share some of her pre-occupations when it comes to Spain and Spanish society?

JAGR: What interests me most is how, for her, in the market society it prevails a germinal attitude of Nazism and, in a more general way, of the war: how the consumer is denigrated and how the denigration is the preliminary step to proceed to extinction (of his will in this case, not of his life-money). If you think about it, the middle and lower classes begin to have less and less voice. Will and freedom of thought are a long time ago the exclusive heritage of certain groups. It is now that the French Revolution has failed in its widest sense.
Regarding racism, I think it is more useful to include it within the above and to study it, especially today, as a socio-economic phenomenon.
Spain… about Spain it is better not to talk…

The poet can be contacted at juanandresgarciaroman (at) gmail.com

Special thanks from the poet to Erika Martínez