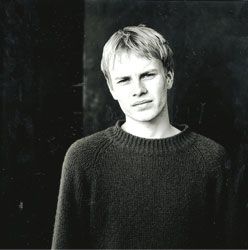 Within a nation that evidences its social and societal advancement through its support of the arts, that has such a evolved infrastructure when it comes to culture, it is no mean feat for a young poet to have achieved the prominence of Endre Ruset. Norway has not allowed its cautious but immense contribution to European literature to become broken and as the generation of Hamsun and Ibsen became Vesaas and Jacobsen so we now have poets like Bergvall, Rimbereid, Vaage and Ruset taking up the gauntlet. A driving force behind the massive Norwegian literature festival staged in May each year, attracting over 30,000 visitors, Ruset is a poet with an audience, and one that is well deserved, and no doubt satisfied by his able, contained, precise poetic output. On Norwegian poetry and his own contribution to that milieu, he speaks to SJ Fowler

3:AM: The twentieth century saw a highly developed poetic tradition in Norway, what is the influence of figures like Rolf Jacobsen, Ragnar Thoursie and Olav H Hauge as the new generation comes to the fore?

Endre Ruset: Rolf Jacobsen and Olav H. Hauge are central figures in Norwegian poetry, both are reckoned as the major poets from after the Second World War (even though Jacobsen published two collections before the war). They are in our “poetic blood”. But their poetry has not had any direct influence on my own writing, and I think that goes for my own generation as well. Georg Johannesen made his debut in 1959, and has published four collections of poetry. Tor Ulven published four very influential collections of poetry in the eighties. Johannesens Ars Moriendi is even voted as the most important collection of poetry in Norway in the 20th century. Ulven started as a surrealist, but he developed his poetry into something unique, that was unheard of in Norwegian literature. It took some time for his works to be appreciated by more than his fellow writers. He is the kind of writer that you might call “ahead of his time”. These two authors had and still have a great impact on me as a writer. I have the impression that many poets in the younger generation are inspired by these two authorships. Jan Erik Vold is also essential, not just as a poet, but also as a conveyer and translator of especially American poetry. Ragnar Thoursie is Swedish, and I don’t know his works.

3:AM: And poets from deeper into the last century, poets like Tarjei Vesaas especially, who seemed to be on the cusp of the developments of linguistically experimental poetry and are appreciated outside Norway, do they still have an indelible presence in contemporary Norwegian poetry?

ER: Vesaas is still influental, still read, but mostly known as a novelist. He doesn’t strike me as a very linguistically experimental poet, even though he separated with strict rhymes and metres.

When it comes to concrete poetry, a lot of that discourse in Norway and Sweden is just plain boring, in my opinion. I am afraid that the Scandinavian poetry is becoming too introverted, that it has lost its musicality. One of the most playful poets in Norway, that has made a successful combination of experiment, auditory and meaning, is Gunnar Wærness. Another interesting poet is Øyvind Rimbereid. His sci-fi collection of poetry Solaris korrigert is written in an imaginary hybrid-language from the future, year 2480. It is composed by Norwegian, English, Norse, German, and a lot of other languages. It follows an operator that repair pipes in the bottom of the Nordic Sea. It was the first collection of poetry to win the Norwegian Critics Award in fourteen years. So I guess there is still a presence of linguistically experimental poetry in Norway.

3:AM: Is your work stylistically experimental? Do you have a specific technical metholody that is either against or embracing classical poetical constructions?

ER: I don’t have any determined approach, or any manifesto on how to write a poem, I read all kinds of poetry, and don’t feel that I belong to any ”school” of poetry. I guess you can write poetry inn all sorts of ways and make something out of it. Just look at poets such as Patrick Kavanagh or Tomas Tranströmer, not very stylistically experimentally, but full of life and variation, it just feels natural.

3:AM: There is inevitable associations in poetry with national characteristics, often detrimentally and now more than ever they seem reductive. However there are immovable influences on poets that come from their environment. Norway has a defined geographical image or association, is it present in your work? Are there considerations in the themes of your poetry that are bound to agrarian themes?

ER: I have a cherry tree in my garden, and I’ve written a couple of poems about it. I am definitely under the influence of what I sense in my community, but I don’t write National Romantic hymns about the mountains or the fiord. The elder poets, such as Henrik Wergeland, Bjørnstjerne Bjørnson and A. O. Vinje wrote poems to build our countrys self esteem. I suppose poets of today try to do the opposite. We try to tear down the romance and myths.

3:AM: Norway is exceptionally advanced in terms of what one might call social civiliity, perhaps stability. Does this affect the work? The fact there is relatively little deprivation?

ER: I honestly don’t know. It is difficult to determine. Conflict and instability could be a good catalyst for writing poetry, just take a look at the “golden” generation of writers in Ireland and Northern Ireland: Heaney, Longley, Mahon and Muldoon. But it is not a rule. I don’t think that living in a safe and stabile country will prevent me from writing important books. I find the experience in the language, not necessarily in the choice of theme. Dickinson wrote world class literature from a loft apartment in the American province.

3:AM: Norway is an educated culture, that is mulit lingual and global in its awareness. Does this effect your influences? Are you a global student of poetry as well as a poet? What is the influence of American poetry, and perhaps French, Russian?

ER: Norway has been described as the fifty first State of U.S.A. The American beat-poetry and American poets in general has been substantial reading for my own sake. Both Jan Erik Vold and Olav Angell has translated and introduced a number of them. My own poetic horizon would be quite different if I hadn’t discovered the American authors at the library when I was quite young. Some of these names where Robert Creeley, William Carlos Williams, John Ashbery and Anne Sexton. Sylvia Plath was crucial. Without reading her poetry, I wouldn’t have made my literary debut when I did. Poets across the world that I read, among others: René Char, Fernando Pessoa, Osip Mandelstam, Georg Trakl, Federico García Lorca.

3:AM: What is the support like for poets and poetry from the state?

ER: The magic word for almost any writer in Norway is “Statens innkjøpsordning”. The majority of books, published at the big publishing houses, will be selected and bought to most libraries in Norway. In addition there are a number of scholarships being handed out by the Authors Association. I teach in writing courses, review books and work as an organizer for a literature festival. Some years, when I have a book, a scholarship and enough freelance jobs, it is possible to live solely on writing.

ER: The poet Steinar Opstad, said that the poet has become a strange form of pariah in society. The most popular political party in Norway (currently in opposition) would like to cut all financial support to culture in Norway. They feel that culture in Norway is being kept artificial alive, and that every artist should make their own money, without help from the state. In their eyes, poetry is the worst form of this cultural “elitism”. At the same time, poetry is by many considered as our cultural alibi, our highest cultural expression. Either people love it, or they cannot stand it. When I introduce myself as a poet, I feel a little bit like people look upon me as a tramp and a duke at the same time, a sophisticated alcoholic.