Notes from this side of the Seine:
Paris, summer riding into autumn, 2011

How can one be anxious in summer? As a poet, one can. As a human, one can. There’s the besieged and quaked and stormed world. There’s my own new book due at the September gate. I’m as impatient as a pregnant cat. There’s the always humbling fact of being human. I’ve yet to change the world. Or I never shall. Only drops—into water, droplets of words, into words. Reality. Check. Check again. To calm myself, I take a train to the outskirts. I take the Euro-star over to London. I reread Keats.

Even though the boughs were certainly heavy with summer, I found myself remaining in emptied out Paris…and yet not. Wandering. Dreaming of the country sides, near and far. Welcoming visits from my dearest elder poets who whispered to me, why aren’t you writing in French! And I promised myself that I shall. Soon. Soon. Meanwhile…imagining myself morphing into someone’s French garden goddess. Because to tell you the truth, in summer, everyone in Paris who can…runs away.

For a quick runaway, I did find myself on a train to the Dordogne, merging with the apple trees… at least for just a few days…

…or, I boarded the RER “A” train for a ride to Crécy la Chapelle, and imagined myself as a châtelaine in that medieval half-an-hour-from-Paris town. Or, I hopped another metro to Chatou, 19th century island of the impressionists, on the Seine…imagining myself morphed inside a Renoir or a Manet, and looking for peace. Summer heading for autumn is at least—for imagining.

But in fact, Parisian summer insisted on a recurrent chill this year. And with my desperate and repeated need for bowls of fresh air, I tapped my pencils. Globally, the historical springtime we hoped was filled with blessings (and so many have thought was truly a freedom spring, a new beginning of peace) was more filled with smoke and mirrors as months bore on. I read too much of the news. I wrote lines that had to be revised. I watched literal and metaphorical clouded skies.

And then… to write of what isn’t at all calm in me, I reread Beckett. Mixed the weighty sentiments of one who lived so long in France, and did it so well that the French naturally claimed him—with summer riding into autumn. From one who knew his world with irony.

Estragon: I can’t go on like this.
Vladimir: That’s what you think.

And eventually, I surrender. To being merely back in Paris, city of light, that is. Return to reality and dream, both, for what all refer to here as la rentrée. The return. I pass a window that reminds me of what we each, me included, need most: a window of peace.

… And I’ll prepare, long ahead of time, I think, this season…for the coming winter webs…and prepare another non-Flanner-esque / but Berdeshevsky-esque letter from Paris.

Under the dirty willows
What weeping can clean

Under the invoked dream, please, let me dream,
Keening of the ants, earth that still and still wants

Sublime fruit to fall, fill hunger no wine or seed has
Ever. Change me, I have always whispered even as

Coming in September, ready for order on Amazon or UPNE…. 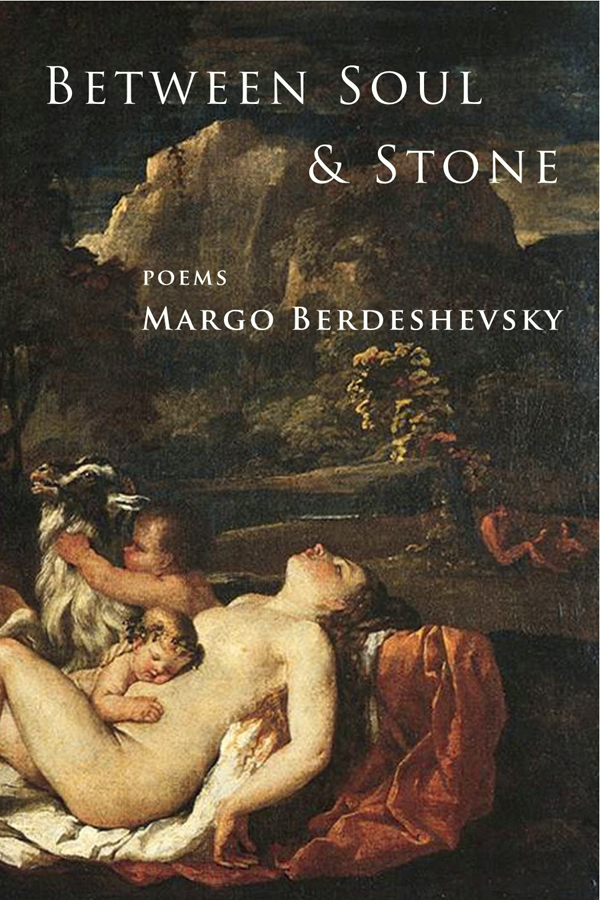 To order from Amazon in the USA: http://tinyurl.com/6hyj5wr

Each page [of Between Soul & Stone] is immaculate as Margo Berdeshevsky wanders with fire from George Herbert to Cassandra to the silence of the sun before the wounded moon: “The pigeon has found a crippled / moon who will not stand again for days. Has / found water’s silence / and the winter wren trusts me.” Her ways are the fantastic, the pathos of “love’s famine,” and a mastery of emotion in her Frost-deep meditation in “Alone in the Old One’s House”: “a hamlet’s umber / roofs any piper could lead children up / to, any troubadour––lute for a raven.” She recalls France of her childhood and now that sustains her wandering world: “Somewhere on the Seine, a motorboat, three/ monks in gray cassocks and life-vests reach.” “Between Soul & Stone” is a book of measured splendors. —WILLIS BARNSTONE