By Poetry Intl Letters from Palestine No Comments 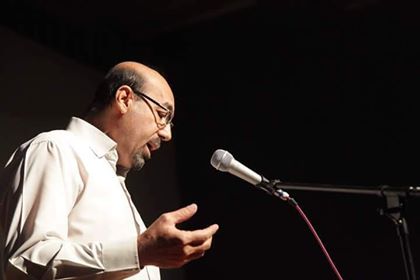 Nasser Rabah is a Palestinian poet born in Gaza. He has published several books of poetry in Arabic. In the United States his work has appeared in journals such as Two Lines (Center for the Art of Translation)  and elsewhere. Writing about him in LA Review of Books, Joanna Chen, a poet who lives in Israel, stated:

“This poet and I live barely 40 miles away from each other, but we’ve never met in person. We live under the same sky, and we have the same weather — particularly hot in this part of the Middle East. The reason is simple: He lives in Gaza and I live in Israel. Three years ago, when rockets fell in Israel and missiles pounded Gaza, the aftershocks could be felt near my village in the Ella Valley. Israeli warplanes regularly swooped over my house on their way to missile attacks on Gaza. We’ve never met and I doubt we’ll be meeting in the near future — the Palestinian-Israeli conflict has seen to that. At the height of the hostilities between Gaza and Israel, I wrote an essay in the Los Angeles Review of Books about people I know on both sides of the border. A poet with whom I gave a poetry reading in DC a few years ago, lashed into me with words that still sting today: “I am so sick of your breed of poets,” he wrote. “This is not a moment for the mincing of words. Joanna, this is a moment of absolute clarity…the language we use must be as sharp and brave as Naomi Wolf’s dispatches.”

Here, at Poetry International Online, we sometime asks our contributors to recommend us a new poet to publish. Another poet from Israel, Hagit Grossman, recommended Rabah’s work; she wrote to us:

Every morning a bridge is raised in the city of Sète, in southern France, and a boat of two high and open masts crossed the road. The men looked at the water and waited for the bridge to return to its place. The bridge turned on its axis and rejoined its place on the road. The children could no longer wait and jumped on the bridge before sinking into place. In the meantime, small boats passed under it until the checkpoint was closed and dozens of cars ran over the silence.

I walked among the paved roads above the sea, climbed up the steep streets to the top of the hill. There I met poet Nasser Rabah. He arrived in southern France from Gaza. I looked at him for forgiveness. “Why do you look sad?” He asked me. “My grandfather was a Hebrew teacher.” He said, and his face shone. We shake hands. Sipping black coffee. “It’s so beautiful that your grandfather was a Hebrew teacher.” I tell him. “Do not be sad.” He asks. Suggesting that we be photographed together. I’m in a blue summer dress and he’s wearing a black cap. Behind us were the doors of the blue toilets and before us, and behind us a bloody war. We stand side by side, not touching. But solid, smiling gently at the camera. At the edge of the lip.

When I returned from France, I encountered difficulty connecting to reality. My back was weak with stabbings in my chest and a weary look, red lips, a red nail polish, a blue dress with white dots, black sandals with high heels.

The poet Nasser Rabah had no way of returning home. He could barely get out of Gaza to Egypt and from there to France. Everyone has already left the festival and is still there. By himself. Looking for a way to get back. We talked on the net. He sent me poems he wrote. I gave them to the translator Yotam Benshalom. They were published in “Iton 77”. The reactions were enthusiastic. “This is true poetry,” the readers said. “What beautiful poems, they made me cry.”

But Hagit herself does not translate into English. So, we asked Saleh Razzouk, an Assistant Professor at Aleppo University, Syria, who has previously written brilliantly for these pages about what it means to be a writer and translator in a war-time. Razzouk collaborated on this translation with poet and Ohio University Lancaster Professor Scott Minar. Although many miles (and many different military conflicts) might separate these authors from each other, there is one thing that unites them: the love of words. Because of this love, we are able to publish these words by the Gaza poet Nasser Rabah.

The children would say we played but not happily, the trees would say we finished our greening but failed to produce fruit, the bell said for years I’ve been dancing alone in a serene nakedness, and speaking would say I have no more to confess to draw absence’s attention before it too goes missing. The children, the trees, and the bell made a boat of senile papers to float on the river, saying O drowning, take away our testaments, we grew up and have no use for anything anymore.
2

O distracted paths you are walking toward me, where I have no place, no visage, and where no mirrors show your senses those full of love, though soldiers are increasing their numbers, along with the dead and the carrying of false banners. My way is distracted so please be vague like the countries, and be angry like the faces, like these ever-increasing mistakes in my heart, however a chance may bring us together in the garden of madness.

I think of the clouds: they were simple land, wars passed them, they soared and soared making a sky, but then changed their minds. I think of the war: a cloud of blood, the rains of sad mothers loved simple lands, but then changed their minds. I think of the land: my land was much too jealous of me, but when I fell for my mother it left our home like a swift cloud and then changed its mind. I think of the heart, how does it go to sleep and wake itself on time, while collecting shards that have been scattered in the mirrors. And collecting its dreams, those have been scattered on the pillow, nevertheless he spat blood on the dress of the lover, the lover who changed her mind.

To the tunes of the Song of Songs all were dancing. For the ears of wheat in the fields of the shepherds, on Jabel Mukaber in the wake of caliph’s ascending. On the gates of Hittin when invaders left it. During the harvest season in the Jaleel when they were crushing fruits and dancing. On the stitching of the bride’s dress they drew a dancing boy and a girl. O most generous Canaans here are my hands, take me where joy can steal us, where the souls of the lands sway, along with their shoots and roots, and where a long lasting dance continues, and where we do not die.

Distracted does not talk to anybody, and is without friends.

She and her thread. Alone with the winds.

Spinning from the rustling of her loneliness a medal of lightweight clay, a rosary of barks.

She and her thread.

She has a god, or she has not.

If he pulls her to him she dies.

If he lets go the vast blue seduces her.

Take me O God. I am sad and bored.

I wave to you with my only hand all day.

nor a crow engraving a tragedy on the clouds.

If you forget about me fables eat me up,

If you mention me forgetfulness swallows me.

I am little, and bored,

And the blue is an inverted river,

but who held my thread has plenty of time.

–Translated from Arabic by Saleh Razzouk and Scott Minar