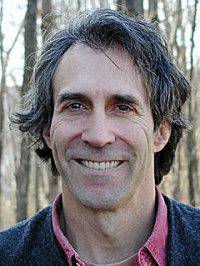 1989. . . . Twenty years ago,  this past autumn,  I was in Poland, Czechoslovakia, and Hungary, making arrangements for an upcoming tour by a Swiss theater troupe with which I was performing. Amid the media fanfare for its anniversary, I’ve been thinking continually about that season of upheavals, which for me was a very personal apprenticeship in hope and daring.

Between 1987 and 1990 I made six trips to central Europe, first with the group Bread and Puppet Theater and then with a Geneva, Switzerland-based troupe, Les Montreurs d’Images. Both groups were very international in composition and outlook, and I toured with performers from France, Chile, Canada, India,  Mexico, Belgium, Spain, Czechoslovakia, the U.S., and Switzerland.

Known and emulated throughout the world, Bread and Puppet has vastly widened the theatrical vocabulary of “puppetry,” ranging in scale from finger puppets to towering pole-borne marionettes requiring half a dozen manipulators.  Our 1987 touring shows drew large audiences to an unpredictable mix of high and low — the circus mayhem of brass band and stilted dancers, and the ferocious political satire of a street show, juxtaposed with beautifully sculpted paste-and-paper personages clothed in cast-off fabric, rubbishy materials that anyone could find or make transformed into an exquisite panoply of forms and shapes. People came great distances to see us, often bringing food to share after the performances; one woman carried a kettle of soup on her knees through a long train trip. Meeting our audiences, we heard again and again how directors and performers were utilizing the presumed inanity and childishness of puppetry as camouflage to slip by government censors, who didn’t seem to recognize in puppet theaters any significance or threat, though the authorities seemed to be obsessed with the potency of poets, who were persecuted viciously.

When I left Bread and Puppet in 1988, I joined Les Montreurs d’Images, whose director and choreographer Monique Decosterd was attempting to use dance as adventurously as Bread and Puppet used puppetry, with masks and stilts, and hallucinatory pacing, and a sixty-foot tipi or “chapiteau” as a performance space; my contacts among venues in Central Europe were enthusiastic about bringing the Swiss troupe to Wrocław and Warsaw, Prague and Budapest and Brno, and we toured in 1989 and 1990 with several shows, including a piece chronicling the life of Joan of Arc, performed in French but very encompassing, visually and musically, and immediately recognizable to many Poles, Czechs, and Hungarians (though evidently not their censors) as the story of a person of conscience surviving a siege and then persecuted by a doctrinaire, repressive regime — not an intentional allegory for their situation, but a dramatic conception that kept on revivifying and ramifying for us with every show we did.

Ultimately, in the summer of 1990, Les Montreurs d’Images was asked to perform for the inauguration of Czech dissident playwright Vaclav Havel as president of a new Czechoslovakian republic; In less than four years we’d gone from clandestine performances in a tiny club to welcoming the crowds at the presidential palace, among the first visitors invited to celebrate the collapse of the old regime, along with Frank Zappa, Kurt Vonnegut, and the Dalai Lama. And those changes I saw, as only a visitor, were just a fraction of the transfigurations undergone by our Eastern European counterparts.   During an accelerating span of days, it was as if Alice’s looking glass had shattered and the far side of the mirror fused suddenly with the near side.

Prior to 1989, the societies of Central Europe could accurately be described as police states, organized polemically and functionally at each level to control the citizenry, from school children to pensioners. Yet we were welcomed with warmth and generosity by people whose friendship with visitors from the capitalist west put them in danger. The repression experienced at that time by dissidents in the old Soviet Union’s satellites wasn’t like that suffered by dissidents in Central America (the U.S.’s satellites) during the same era, Guatemalans or Salvadorans who might be murdered and mutilated by paramilitary death squads. The Central European regimes were decrepit and muscle-bound, with aging dictators and massive bureaucracies, but were still capable of “disappearing” an opponent, not typically by assassination but by erasure, the elimination of educational and professional options and endlessly various forms of house arrest. Think of the intellectuals (artist, philosopher, theologian, saxophonist) working on a trash-picking crew in the marvelous Jiří Menzel film, Skřivánci na niti (“Larks on a String”).   Art in such circumstances (even when exceedingly quiet, or oblique, or disguised as tomfoolery with puppets and masks) is politically insurgent, an expression of capricious imagining, of irrepressible delight, of thoughts not incarcerated but in action.

The old Central European regimes survived by creating a culture of ubiquitous suspicion and double-crossing, where anyone you knew — even a family member, certainly a neighbor or workmate or fellow student — was very likely to be spying for the government, for payment or to gain some advantage. So befriending someone was an act not only of amity and civility, but also subversion. Never before in my life had I been in a situation where friendship meant hazard or even punishment. In my mind’s eye I can easily see (and will never forget) the characteristic sideways glances through any conversation, as the one with whom I was talking (just talking) would repeatedly check the room or street around us to see who else was listening.

In that climate of potentially overwhelming paranoia and second-guessing, no one knew what the regimes were capable of doing if endangered. And no one knew how the Soviet Union would respond to signs of government weakness or outright insurrection, as began to occur among the Solidarność trade unionists. I remember being in Warsaw on the morning of June 4, 1989, standing on the sidewalk with a Polish theater director who had a transistor radio pressed to his ear, and seeing him blanch white as paper when he heard a BBC report of the massacre that had apparently just occurred at Tiananmen Square. . . . On that summer morning in 1989, a massacre of nonviolent demonstrators by Polish armored troops was likewise altogether plausible. Seemingly no one predicted the imminent dissolution of official communism. The changes that took place were cyclonic in speed and impact.

I always have a book in my pocket or bag, and during that time I made a practice of reading the authors of the countries we were traveling through, which often surprised and delighted our hosts, and which in the earlier visits required the hiding or caching of books to avoid likely seizures by the police who routinely stopped our vehicles and rifled through costumes and props and personal affects, searching for banned materials or even human stowaways, frequently with sniffer dogs. I felt I was living in the pages of Tadeuz Konwicki’s A Minor Apocalypse and Gyorgy Konrad’s The Case Worker and Josef Skvorecky’s The Engineer of Human Souls and Milan Kundera’s The Book of Laughter and Forgetting and Czeslaw Milosz’s The Captive Mind and Bells in Winter.

For me Milosz has probably been the most important writer of my adult life, but the author whose work best dramatized the self-deprecating but worldly, boldly associative character of so many of the friends I made among the Poles, Czechs, and Hungarians was Zbigniew Herbert. For years I carried and still treasure now a battered, travel-stained copy of his Report from the Beseiged City (Ecco, 1985) translated by Bogdana and John Carpenter.

I was told that Herbert withstood daily — sometimes more than once daily — arrivals and interruptions by the police, who would arrive and demand all his papers. Imagine, American writers —! Not only the disruption but the nerve-bending distraction of never knowing when your tormenters would hammer at the door, then confiscate any writing they can find. So, apparently Herbert developed a system for passing copies of his poems to friends and accomplices who would come by for tea and carry off (maybe memorized) sections of poems to be recopied and distributed surreptitiously, in a kind of visceral “publishing” whose intimacy and urgency we can’t comprehend in our book-glutted culture. A Czech friend showed me a samizdat “magazine” typewritten with carbons (five sets at a time could be typed, before the sheaf was too thick for the typewriter roller and the keystrokes too faint), passed around (with the obligation to pass them on, in three days), filled with original writings and translations from throughout the world — essays by Didion and Sontag, interviews recopied from Rolling Stone or Playboy from Tom Waits or Leonard Cohen or Patti Smith. After one of our performances I met a man (later the mayor of Prague) who had translated into Czech the poems of Plath, Lowell, Berryman and Larkin. I shared beers and bowls of soup with another man who was the Czech translator of Philip Roth, Kurt Vonnegut, and Joseph Heller. I’d never encountered anyone anywhere for whom art and literature mattered as enormously as for those I met in Central Europe.

As for Herbert, when others defected and sought exile, he never left Poland. Like Herbert, my new Polish, Czech and Hungarian friends had chosen to remain. They weren’t revolutionaries in the declamatory sense but mischievously seditious, not smashers of the state but underminers of absurdity, as if they believed they could (together) wear away through small, improvisatory acts of defiance the mind-numbing frigidity of official repression.

The poet Herbert was able to break through the ice of indifference not with an axe but with warm, moist breath, steadily directed.

I now experience Herbert’s poems saturated with the accumulated power of years spent as his reader, and without that context I’m not certain how an example will come across. If Milosz is Whitmanic in some ways, Herbert is an heir to Dickinson’s sphinx-like obliquity and innuendo, epic in scope on a miniscule scale. Herbert’s persona Mr. Cogito is a guide to the universe, ancient or about-to-be. Like we’d imagine his creator to be, Mr. Cogito is rueful and erudite, blinking in the bright light and warily solitary, but also (often) very funny, a combination of Chaplin’s tramp and Montaigne’s scholar in a tower and Cocteau’s Heurtebise and Baudelaire’s flaneur.

At his death in 1998, what poems this man left us: quiet, just barely above the volume of a murmur; piercing in candor but assiduously, even painfully modest in demeanor, uncapitalized and unpunctuated; delicate, but like spider’s thread, strong as spun steel.

Jim Schley lives in Vermont. He is the managing editor of the book publisher Tupelo Press, and his most recent book is As When, In Season (Marick Press, 2008).