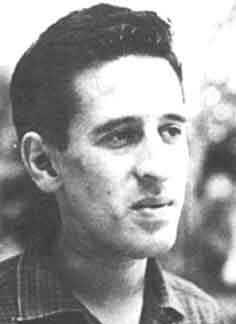 Roque Dalton (1935-1975) was a Salvadoran poet and journalist.  As a result of his political activities, Dalton was frequently imprisoned, escaping the death sentence more than once, once when an earthquake leveled the walls of the prison in which he was held.  He lived most of his life in political exile (in Czechoslovakia, Mexico, Guatemala and Cuba).  He returned to El Salvador in 1975 as a member of the People’s Revolutionary Army (ERP) and fought as a guerrilla in several revolutionary movements.  Dalton was assassinated, reputedly by a member of a rival Maoist faction of the ERP.  He wrote emotionally strong, sometimes sarcastic, and image-loaded works dealing with life, death, love, and politics.  He is celebrated, not only on postage stamps in El Salvador, but as a key figure of the political arts in Latin America.  He is considered one of Latin America’s most compelling poets.

In our upcoming issue #18, Poetry International will publish several English group translations of poems from the French and Spanish completed by a group of our editors and interns.  The process was both challenging and satisfying, and following the completion of the group translation project for issue #18, a group of us decided to continue working as a group to translate poems.  We spent the late winter and spring translating poems together and reflecting on what makes the group translation process special.  We invited new interns and folks from the Poetry Translation Club at San Diego State University to join us.

Four distinct scholars and poets make up the group of translators participating in this project.  Two are MFA students in poetry, one an MA student in Spanish, and one an undergraduate majoring in English.  While the two MFA student poets have previous but limited experience in translation, the MA and undergraduate students have never before written or translated poems.   Of the four, only one is totally fluent in Spanish, while the other three have varying levels of fluency.  Two are native speakers of English, one a native speaker of Spanish, and the fourth was raised bi-lingual.

We began the process by individually researching and nominating poems in Spanish that we loved and would enjoy translating.  One member of the group compiled these twenty or so poems and sent the manuscript of potential poems to the group, asking each member to select their top three poems.  As we had hoped, one poem was selected by at least three of us, allowing for a democratic selection process.  If there had been no overlap, we would have met and discussed each the poems making the initial cut and gone through a second round of voting.  We decided on Roque Dalton’s “El descanso del guerrero:”

Once Roque Dalton’s poem was selected, one of us developed a tentative schedule/process for the group translation project and submitted it to the group for agreement.  First, we each translated the poem individually and sent it to the group two weeks after the initial selection.  We then had two more weeks to review the individual translations, and make notes about which approaches and line by line translations we preferred. We then met in person for two hours to go over each line in excruciating detail.  We ended up not having enough time at the first in-person meeting, so we arranged to meet again a week later to finish our first draft.

As expected, each person chose to translate the poem a little different.  There seemed to be two camps: one that took the literal translation approach and stayed true to the language of the poem in Spanish, and a second that was more experimental and took liberties with the language in an effort to ensure the power of the poem remained once translated into English.  In the end we compromised and made the decision to take a mostly literal approach with a few targeted departures dictated by the need for the poem to be clear in English. In the end, the general lack of translation experience of the group created an unwillingness to experiment too much with the poem, or make departures from the literal translation, unless absolutely necessary.

While some lines were easy to finalize once we began discussions, others sparked more dialogue and friendly argument.  The most difficult section in the poem for the group was the second stanza.  In particular, the final four lines of this stanza were problematic.  Initially the non-native speakers felt that the difficulty centered on finding appropriate language in English to capture the poet’s intent, but later, through dialogue as a group, the consensus was that the lines were not just difficult because we were attempting to translate them, but because they were vague and open to a variety of interpretations in Spanish as well.   Working together we tried out a variety of translated options and tentatively agreed on an initial translation for the first draft.  We agreed to take a week or so to review the first draft product to see if the translation we agreed upon was relevant and useful once we had the time and opportunity to reflect on the first draft of the poem’s entire translation.  There were a couple other moments in the poem, like translating “El cadáver firmaba en pos de la memoria,” which we also agreed to come back to since we couldn’t decide if the line should read “The corpse signed to be remembered,” or “The corpse signed up to be remembered.”

Two other elements of the poem also sparked debate.  First, the title implied a guerilla fighter and not a traditional soldier.  We assumed that if Dalton had meant soldier in the traditional sense he would have used the word “soldado” and not “guerrero.”  However, the poem itself seemed to describe the death of traditional soldiers rather than freedom fighters.  The group went back and forth between titling the poem “Soldier’s rest” or “Warrior’s rest.”  Second, the line “les dábamos un cuello duro una flor” was difficult to understand since it literally meant to give a flower to a stiff collar.  The group wondered if this particular line alluded to a specific Salvadoran burial ritual for soldiers, just as we wondered about what was happening in 1969 in El Salvador (although we knew about the political unrest and revolution) that might help us clarify the most appropriate title for the poem’s translation.  We assigned one person to research Roque Dalton’s life, Salvadoran cultural practices related to burial of soldiers, and the political situation in El Salvador in the 1960s before making a final decision.

In the first complete group draft of the poem, for single lines where we couldn’t decide between two potential translations, we included both side by side so the translators could spend time reflecting on each option and play with the language during the one week review period after the first draft was complete.

We met a final time to review the first draft and make final decision on the parts of the poem where we had been previously unable to come to consensus.  This process took about thirty minutes, and went fairly smooth because all were in agreement on the line selections after having had time to review them and reflect.  The line we struggled with the most in the end was “El cadáver firmaba en pos de la memoria.”  We still had trouble deciding between “The corpse signed” and “The corpse signed up,” and ultimately we decided that “signed up” made more sense in English than “signed.”  In the end, we also compromised on “Soldier’s rest” as the title since the poem seemed a commentary on the more traditional role of a soldier, however, no one was completely satisfied with the final title.  We also decided on a literal translation of the collar/flower line since it made the poem more interesting and we could find no burial practice information to elucidate a specific custom present.  In retrospect, we all agree it would have been helpful to consult a native of El Salvador or an expert in Salvadoran history and culture.