Forgive the Body This Failure: David Keplinger on Blas Falconer 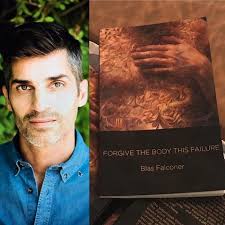 FORGIVE THE BODY THIS FAILURE

Much has been written about the necessity and even the benefits of learning how to fail. Tragedy in the classic sense is a master class on failure, the failure of the mind to overcome what has been ordained either by God or the State or logic itself. Literature is rife with failures, all the beautiful failures, each with their own version of this story. And there is an ultimate failure, certainly the engine and source of these imaginings. It is the body’s failure to stay alive. This is the irresistible, ineluctable—from the Greek, “unable to be wrestled”—angel behind Blas Falconer’s Forgive the Body This Failure, published in September 2018 by Four Way Books.

A classic landscape, too, imbues the poetry in this collection. There is a sparseness reminiscent of cave painting, or it is a stained glass, cut out world, etched with a the small knife of language. The collection opens with the delicate image of a boy holding flowers, which “as if for you,” he holds out, “red/blossoms sprouting from/his small fist.” This invitation to read and to enter the conversation, as the recipient of these flowers, charges the reader with the responsibility, too, to bear a kind of wound, to open up within oneself a void. In the companion piece to this poem, at the end of the collection, “Study of Boy with Ocean,” the author completes the thought with a passage from Simone Weil: “Grace/can only enter where/there’s a void/to receive it…and it is grace/that makes the void.”

But unlike the classic, tragic figure, Forgive the Body’s speaker journeys to accept what cannot be known, cannot be seen. The book is a work of surrender. In “Heaven,” the speaker’s son asks, in his grief over “them,” presumably a beloved animal that has passed, “How/ will I ever know how/ to get/ there,” reasoning that, if the parent protects him from seeingdeath, he’ll never himself learn the way. In “Event,” the speaker holds a glass and watches as the water lightly trembles, “like the first/swell of panic, when/you can’t tell where/it’s coming from.” The poem “Revolution” concludes, “I’ll wait beside you, though/I don’t know what we’re waiting for.” The surrender into not knowing, not trying to describe, not attempting to understand become a negative capability: these affordances to mystery are what stitch together the fragmentary, lyrical network of lines into a single volume, as well. In the poem following “Heaven,” the speaker describes his son’s obsession to know more about the story of his birth mother, from which only a few, glittering details can be gleaned. “That is your story. This/ is your share,” says the speaker/parent, “of the world’s grief, what you must carry.” Behind the lyricism and vision of Forgive the Body, there resounds this terrible and beautiful drumbeat out of Keats, “That is all/ ye know on earth, and all ye need to know.”

Falconer’s poetry book contains the word “failure” in the title, yet the measure of its reach is considerable. He is the author of two other admired collections and the recipient of an NEA fellowship, as well as other honors for his past work; nevertheless this collection is representative of his best poetry. The poet Victoria Chang writes in her endorsement that he “looks at the world with a chiseled eye, refracts what he sees, and whispers it into our ears in fragments–what we are left with is something akin to wind.”

I agree that the poems offer the sensation of walking among ruins in Sicily, where, in the broken parts and the silences between the great pronouncements there is real truth to be discovered. The line breaks, enjambed, literally shattered, cracked ruins themselves, heighten the mood for this scene. That backdrop embodies the decline, the beautiful failures, that open spaces for shafts of light. “The sun/so bright/when you sink,” he writes in “Study of Boy with Ocean,” the marvelous last lines of the collection, “you can’t/see where to go/and going down/becomes another way.”