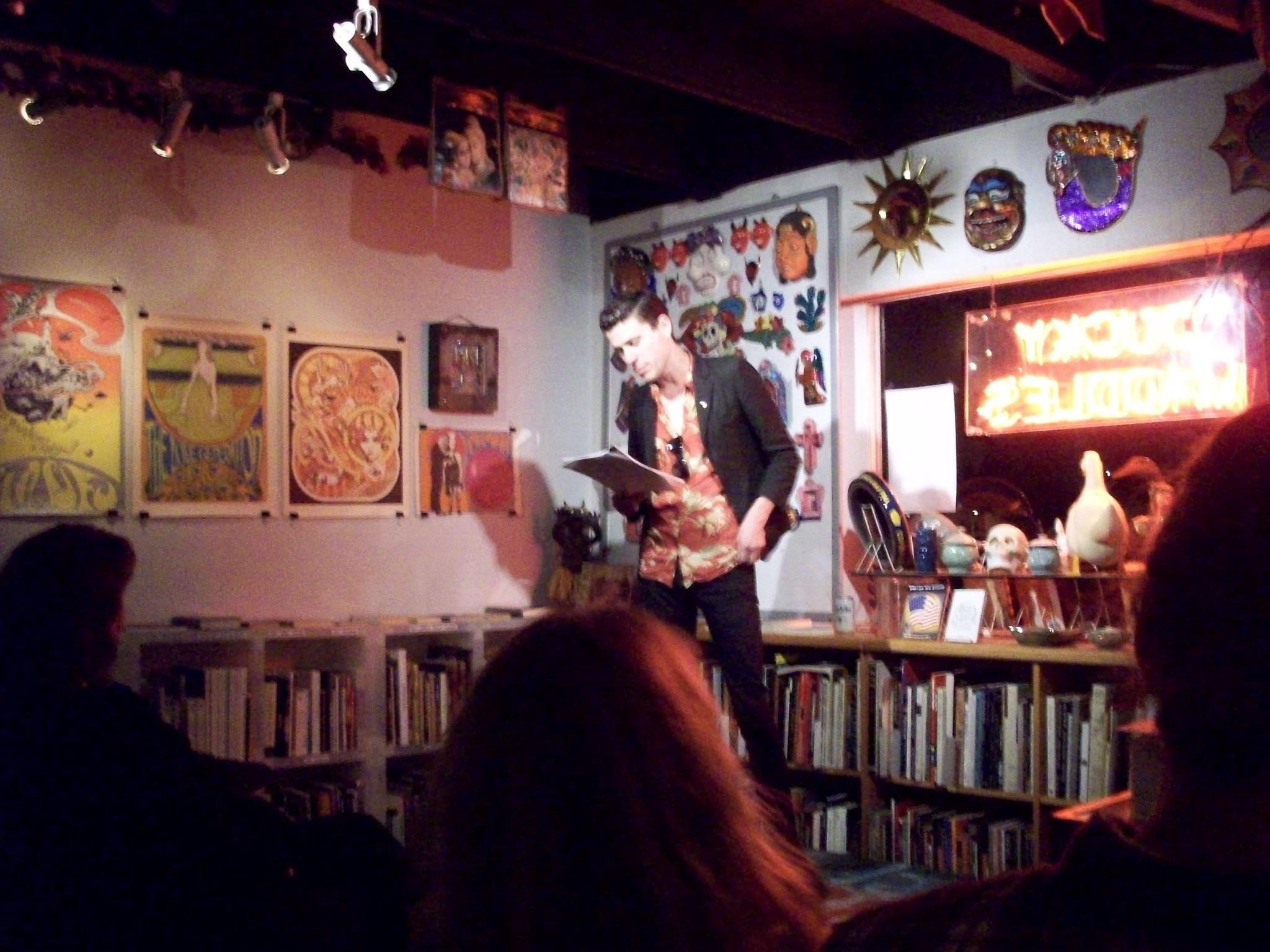 A small handful of close fans and various amateur poets of the San Diego area were lucky enough to be at the first live poetry reading from three members of the local, nationally touring band Crocodiles last Wednesday night. And it was at a hole-in-the-wall bookstore called Ducky Waddle’s Emporium of all places.

Like moths to a light, the small audience was pulled into the little retro-looking bookstore by the single red neon sign glowing on the lamp-less Encinitas highway. A surfer-bro-poet read some Allen Ginsberg to the sound of polite soft clapping and snapping. Then in an instant it all felt like an acid-tinged flashback to the San Francisco beat scene in the 60’s complete with a few uncomfortable melodramatic expressions of angst with the vintage psychedelic posters setting the scene nicely. It was a pretty amusing experience to hang out with a band that will be touring Europe next month while listening to some ridiculous haikus another local poet wrote when he was drunk.

When it was finally time for the “special guest” portion of the evening, lead singer Brandon Welchez shuffled up to the tiny wooden stage and started reading from the trio’s Machine Gun Brothers chapbook, his hands shaking slightly. Stripped of the restrictive rhyme scheme of song lyrics, Welchez’s poetry painted strikingly dark images that were clearly taken from real events. There was none of the showy bravado that one would expect from a front man turned poet. Instead the works were based around the gritty, concrete descriptions of the same Americana-esque sex, drugs and rock ‘n’ roll palette found in any Crocodiles song. But the soft-spoken delivery cast the themes in an incredibly intimate way.

Next up was guitarist Charles Rowell who was endearing with his modest assertions like “It only gets worse from here.” But his poems fit nicely with the American landscape aesthetic Welchez had established. To close the evening, bassist Marco Gonzalez pretentiously lamented how sad it was that women at this day and age don’t have positive role models. After some encouragement of “You go girl!” He mumbled his way through some surprisingly well-done, mini-bursts of relatable expression that slowly began to weave its way together throughout the reading. It was refreshing to see a band of that level of success shed the stereotypical rock star image in order to get up onstage and share something as personal as poetry to a group of judgmental and complete strangers. You can check out their live readings below and catch them at the House of Blues with Temper Trap on June 13t

This first appeared in the San Diego CityBeat.