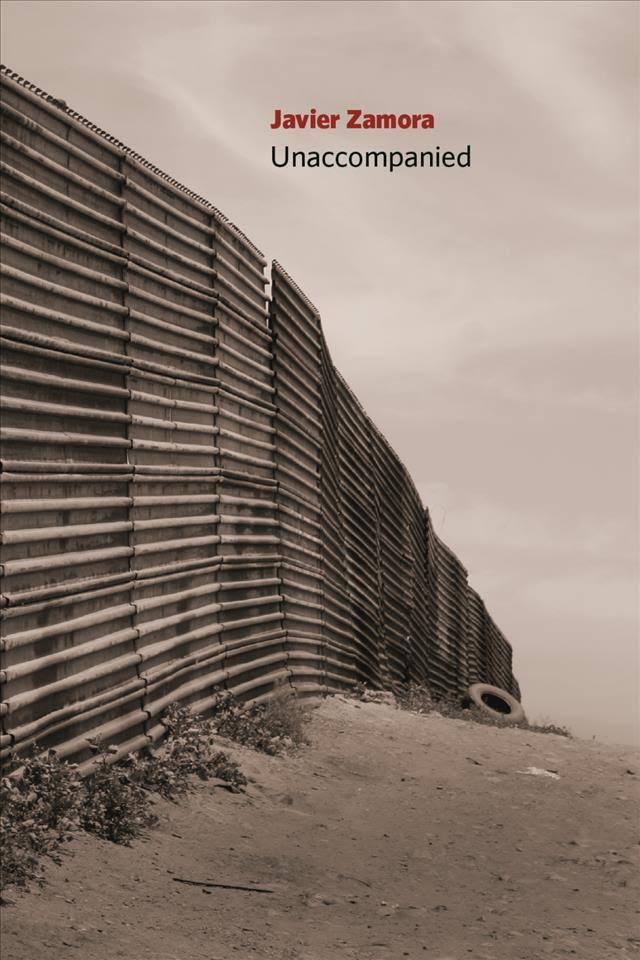 The opening poem of Javier Zamora’s Unaccompanied, “To Abuelita Neli,” lays out the difficult, high-stakes emotional and political issues with which the collection will continuously grapple. The poem opens:

This is my 14th time pressing roses in fake passports
for each year I haven’t climbed marañón trees. I’m sorry
I’ve lied about where I was born. Today, this country
chose its first black president. Maybe he changes things.
I’ve told Mom I don’t want to have to choose to get married.
You understand. Abuelita, I can’t go back and return.
There’s no path to papers.

From the beginning we see a speaker torn between conflicting demands. He presses roses into fake passports to mark the time he’s been away from the country of his birth (El Salvador, we later learn), a touching gesture of remembrance. At the same time, though, he has had to lie about where he was born, a betrayal he feels deeply and one for which he seeks his grandmother’s forgiveness. There’s the hope that the election of the U.S.’s first black president “changes things,” but it’s a distant hope, a “maybe,” and the reality is that “there’s no path to papers” for this speaker. Instead, he continues:

I’ve got nothing left but dreams
where I’m: the parakeet nest on the flor de fuego,
the paper boats we made when streets flooded,
or toys I buried by the foxtail ferns. ¿Do you know
the ferns I mean? The ones we planted the first birthday
without my parents. I’ll never be a citizen. I’ll never
scrub clothes with pumice stones over the big cement tub
under the almond trees.

All the speaker can claim are memories—beautiful memories, yes, but ones he fears Abuelita may not even share with him, meaning he would be truly alone. When he asks, “¿Do you know the ones I mean?” the use of Spanish punctuation in an English sentence typographically reinforces and extends the sentiment: at the same time that the speaker tries to dispel his fear that Abuelita may not share the memory, Zamora reminds us of the speaker’s (dis)location between two countries, two languages, one in which he’ll “never be a citizen,” and another in which he’ll never again “scrub clothes with pumice stones,” that is, one which he can visit only in his (perhaps wholly isolated) memory. The speaker at once belongs to two places and no places. And still worse, in sharing the news, in trying to keep the speaker connected to the country he’s left, Abuelita can only reinforce his separation from it:

Last time you called,
you said my old friends think that now I’m from some town
between this bay and our estero. And that I’m a coconut:
brown on the outside, white inside.

The speaker, of course, is angry at this—but he can’t even challenge his old friends directly. Instead, he must go through Abuelita, and in doing so, he must once again apologize to her:

Abuelita, please
forgive me, but tell them they don’t know shit.

Such gut-punch endings are a hallmark of Unaccompanied. Take for instance “from The Book I Made with a Counselor My First Week of School”:

His grandma made the best pupusas, the counselor wrote next to

(I’d colored her puffy hair black with a pen).

Earlier, Dad in his truck: “always look gringos in the eyes.”

Mom: “never tell them everything, but smile, always smile.”

Already we see the problem. The counselor surely means well enough, but what good can she really do? How could adding captions to a picture book possibly help a child whose daily reality is being coached by his parents to avoid the threat of deportation? As the poem continues, Zamora raises the stakes ever higher:

from helicopters, running inside detention cells.

Next to what might be yucca plants or a dried creek:

Javier saw a dead coyote animal, which stank and had flies over it.

I keep this book in an old shoebox underneath the bed. She asked in Spanish,

I just smiled, didn’t tell her, no animal, I knew that man.

Now the gulf between the counselor and the child is devastatingly clear. The counselor speaks to him in Spanish, and superficially it seems a connection is being made—and yet it’s the very moment when the young child is most alone, when he must hold within himself the truth of the death he has witnessed.

Unaccompanied is deeply marked by such isolation, such failed connection. In “Vows,” for instance, the speaker tells us that:

Ever since a brown girl wanted fifteen thousand from me
to marry her, I’ve vowed to not sign documents
to get a visa, then ask myself why
I’ve let that hurt me so much to never buy rings.

And in “Let Me Try Again,” the speaker and those with whom he has tried to cross the border are detained by an officer “who probably called himself Hispanic at best, / not Mejicano like we called him.” He shows them kindness, gives advice, but ultimately still blocks their passage.

And yet, despite such separations, Unaccompanied also shows us moments of profound connection, made all the more poignant by the loneliness surrounding them. Zamora’s is a deeply moving book, one to visit and revisit. It is a book of pain and beauty, separation and connection, exile and belonging. There’s much more to say, but instead I would give the last word to Zamora’s lovely “Exiliados,” a poem that embodies so much of what gives the book its power.

We didn’t hold typhoons or tropics in our hands.

I didn’t reach across the table on our first date

at Cornelia Street Café. In my humid pockets,

my fists were old tennis balls thrown to the stray dog

of love bouncing toward the Hudson down

to South Ferry. We didn’t hold hands in that cold

October wind, but the waves witnessed our promise

to return to my cratered-deforested homeland,

and you to your parents’, sometime in the future.

Then, us in the subway at 2 a.m. Oh the things I dreamed:

a kiss to the back of your neck, collarbone, belly button, there—

to kneel and bow my head, then return to the mole

next to your lips and taste your latitude together.

Instead, I went home, you touched my cheek,

it was enough. I stood, remembering what it’s like

to stand on desert dirt wishing stars would fall

as rain, on that huge dark country ahead of me.