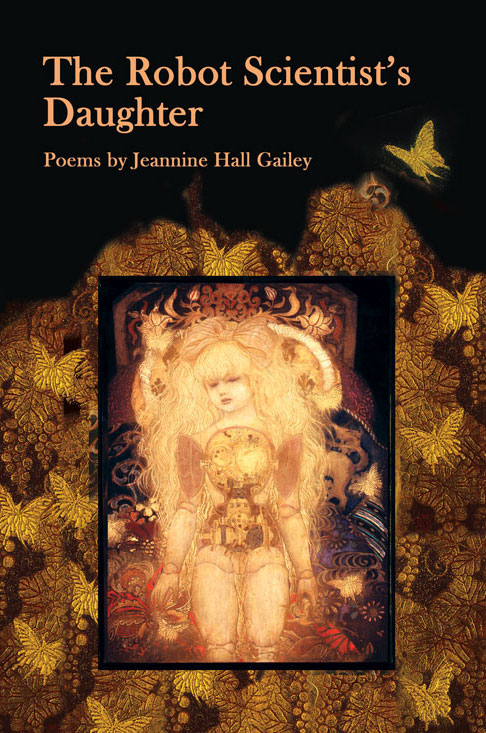 “The daughters of inventors are bound/to circumscribe their father’s creations with words.” Jeannine Hall Gailey uses this book to do just that, using her own experiences growing up near a nuclear facility in Oak Ridge, Tennessee, to create a unique narrative. An extensive author’s note begins the book and gives the reader the background of this place, but the reader doesn’t need the notes to understand the book’s powerful messages about science, nature, power, and consequence.

The main speaker here alternates between the “I” and the persona of the “robot scientist’s daughter,” giving the reader two different perspectives on the joys and challenges of growing up in a battle between nature and science –the human and the once-removed. The “I” revels in flowered fields (although they glow blue with cesium), sassafras tea (although it is carcinogenic), and the metallic taste of the world on her tongue. Indeed, she often literally tastes the world around her–

Our chain-link fence is rusty. I like to taste it—
that metallic clean I imagine to be the flavor
of lightning. (from “The Taste of Rust in August”)

She learned early to tell poison plants
because she liked to eat things in the yard—
wild onion, grass, green apples… (from “Lessons in Poison”)

and this echoes later when the persona of the robot scientist’s daughter admits:

What they sowed in the ground isn’t gone;
It’s in the mouths of their children
chewing grass…” (From The Robot Scientist’s Daughter [villainess]

In “Iodine-131”, the singular speaker tells us it was:

in our rainwater, months later the ions
gather in our forests, the drops on our lips
as we watch the heron and otter in the river.

We don’t fear what we can’t see.
Like the schoolchildren in Yokohama
fed beef from radioactive cows,

we continue to play in the dirt, unaware
and uncaring.

This ignorance of reality, this powerlessness, is echoed later in “The Robot Scientist’s Daughter [director or dictator] when even the persona finds that:

other people did what she told them,
but not her own body, a traitorous animal
that squirmed out of her grasp…

This is an effective and often employed interplay between the poems – an introduction of an emotion, image or idea by the singular speaker and a response or continuation from the persona. But these are not the only “characters” who inhabit these poems.

The scientists themselves are here, and Gailey points out in the introduction that these scientists are conglomerations of real scientists (like Robert Oppenheimer, Louis Slotin, and her own father), science writers like Asimov, and scientists in popular culture, especially film. Both torn and driven, these men are not depicted as either gods or monsters, but as uniquely human. In “Chaos Theory,” the father/scientist’s stories about the mutated garden at one site include only the “ offspring gigantic and marvelous/
from that ground sick with uranium” and never the radiation poisoning from which its caretaker would most likely die. In “Elemental,” we are faced with the real and terrifying proposition that “We absorb and our body says:/it is good.” And, in “The Scientist Solves a Puzzle,” we have a confession of sorts:

I don’t remember what I wanted to accomplish […] I stack one atom next to another, then force them
apart, race them against the clock. I’m only guessing.

This revelation makes the frightening details in many of these poems ring all too clear. In “The Women of America’s Secret City in 1945”, we meet

The horned-rimmed chemists and physicists
in sensible heels not questioning the yearly x-rays,
the uranium taped to their thin wrists.

And in “Fukushima Mutant Butterflies Spark Fear,” we are shown that this is not just a history lesson as we are reminded that

under the ground our monsters sleep
and form poisons inside us, curling our fingers,
graying our hair, forming tumors quietly in the night.

These poems bring us the dangers of the nuclear age as a current reality, a warning that continues to be necessary. Gailey uses the language of science to lend authority, but at the heart of these poems is a deep and simultaneous love of and fear for humanity, found in the bodies impacted by sickness and helplessness and the hearts trying to reconcile scientific progress with a love of the natural world it is destroying. At one point, the robot scientist’s daughter says that she is “fit only to spin stories.” How lucky we are that, through these poems, Gailey does just that, giving us not only a story, but a delicate, balanced meditation on truth, family, nature, and power.