Book Review: The Poem She Didn’t Write and Other Poems by Olena Kalytiak Davis 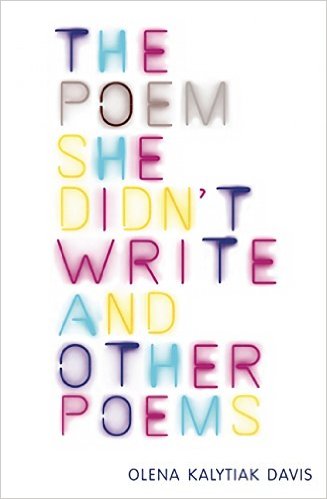 Olena Kalytiak Davis is a Ukrainian-American poet and lawyer. She’s the author of three collections of poetry And Her Soul Out of Nothing (1997), shattered sonnets, love cards, and other off and back handed importunities (2003), and the collection being reviewed which is a Lannan Literary Selection: The Poem She Didn’t Write and Other Poems (2014). She has demonstrated that she works within, against, and around the confessional mode supplying readers with gripping syntax, referential lyrics, and textured sensuality that few contemporary poets can rival.

Davis begins her book before most poets do. She breaks conventions and begins with an “Encomium,” an exclamation of high praise, in the acknowledgements section of her book, zanily thanking foundations, journals, and the (unknown) Reader from her “immortality on a skateboard.” This is a primer. She will soon use parentheses, strikethrough on text, and will use a lowercase “i” in quotation marks to write in first, second, and third person over the course of a single poem, the wonderful “The Lyric ‘I’ Drives to Pick Up Her Children from School: A Poem in the Postconfessional Mode.”

The collection is split into two nearly even parts with the first section comprised mostly of longer free verse, lyrical poems with a few shattered sonnets dispersed inside and several shorter poems to keep the pacing up, punctuate the voice in the smaller poems, and give the brain a break from the longer pieces. Davis’ sprawling first section may leave readers reeling and feeling as if they’ve received TMI, but the truth is its meta-meditative-post-post-confessional-free-verse-lyrical-sometimetimes-narrative-poetic conversations construct a singular and fractured “I” that could very well actually be you or I. The beauty is that all of these poems reveal a self, yet what we might actually learn about the real Olena Kalytiak Davis is that she may “live in Anchorage, Alaska,” and I enjoyed that feeling.

The second section has shorter pieces like the five “Fragmentary” poems (53, 60, 68, 79, 98), the seven sonnets (54, 56, 64, 70, 76, 78, 104), and the other close to sonnet-sized poems nearer to the traditional lyric, and slightly less referential excluding the longer poem “Orpheus and Eurydice (2005).” This section has poems that allow more space, more silence. Though there is still sensuality, this section also has more tender poems about love and sex such as “(And More),” “Alaska Aubade (Summer),” and “You Are Who.” The final two poems end on a note closer to the rhetorical arguments of the first section, but using form. “Sonnet (full-court pressed) and “Threshold” comment on the possible overwhelmed reader or critic as a beautiful and humorous self-critique, ending: “what I should of softly sweetly surely said: / “o winged boy, come read with me in bed” (105).

The title poem, “The Poem She Didn’t Write,” is the literal centerpiece of the collection and serves as the poem which breaks the first section into the second. It’s also the longest poem in the book and packed with enough references and subtext to keep a graduate student busy explicating it for about a week. One of the most noticeable things about the poem is that it begins with hesitation even though the title bleeds into the poem: “The Poem She Didn’t write // began / when she stopped //” (44). It starts, then pauses for a yogi’s deep inhale. The next few lines also articulate hesitation:

began in winter and, like everything else, at first, just waited for spring
in spring noticed there were lilac branches, but no desire,
no need to talk to any angel, to say: sky, dooryard, _______,
when summer arrived there was more, but not much
nothing really worth noting
an then it was winter again (44)

Her syntax, her shifting of adverbial phrases, and her repetition slow the reading of these lines to establish a rhythm that will later change. This poem is about transformation in form and in content. This can be seen most prominently with the makeshift section breaks of all capitalized letters changing from “THE POEM SHE DIDN’T WRITE” to “THE POEM” to “THEPOEMSHEDIDN’TWRITE” and other various iterations of the text. So much of the poem, like others in the collection, require a basic knowledge of her literary progenitors including poets, authors, critics, and philosophers like William Blake, Louise Gluck, Franz Wright, Harold Bloom, Gerard Manley Hopkins, Catullus, and Derrida among others.

One of the others that may be a controlling influence of the poem’s title and daring energy is Ezra Pound. What Davis may be working against is the idea of Pound’s Modernist call to “make it new” which she simultaneously challenges and benefits from in different parts of the poem:

She’s asking here for “make it new” to not be the looming force behind contemporary poetry, and in turn lessen Harold Bloom’s anxiety of influence, and suggests an ideology that is more in line with T.S. Eliot’s views in “Tradition and the Individual Talent” when he describes his “impersonal theory of poetry” as a poet becoming better by “by being a more finely perfected medium in which special, or very varied, feelings [and ideas] … enter into new combinations.” This would mean that she didn’t write the poem not only because she didn’t get around to it, but because she served merely as a medium for the poem to be written because of the tradition she is aware of. Still, Davis is a poet of simultaneity and contradiction, so she also suggests the dangers of the alternative, writing: “THEPOEM / was repeatedly misattributed    it          it crossed and re-crossed genres / some said it had once been         a Charlie kaufman movie / or a novel by davidfosterwallace” (48). She later comments on the ridiculousness of accuracy and the absurdity of the desire for denominations. She ends the poem with the simple idea “how did we live (not) not thinking about poetry, when, after all, that was all there ever wasn’t” (49). These lyrical, logical arguments with self spread the entire collection whether about poetry, love, sex, or the “I.”

Of course Davis has been compared to poets like Sylvia Plath or Anne Sexton for her wildness, for her unapologetic sexiness, for her metaphorical and rhythmic fortitude, but the comparison is unfair; Davis is neither of these poets. Instead, Olena K. Davis is of which the Plath and Sexton would’ve probably been jealous.