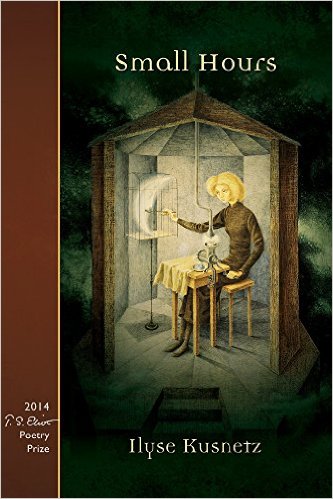 Ilyse Kusnetz has been a finalist for such awards as the Stan and Tom Wick Poetry Prize, the Richard Snyder Poetry Prize, and the Crab Orchard First Book Award. Not only has her work appeared in such journals as The Cincinnati Review, Crazyhorse, Rattle, Poet Lore, and Atlanta Review, but her chapbook, The Gravity of Falling, was published by La Vita Poetica in 2006. Aside from being a poet, Kusnetz is also a journalist, and her work has appeared in The Scotsman, Scotland on Sunday, The New Statesman, and elsewhere. I mention all of this because it is important to note that Kusnetz brings to her work the necessary observational powers of a poet but, as we shall soon see, she also brings a deep and abiding appreciation of history. Her poems delicately balance the rigor of research against the artistry of language.

Her first full-length collection, Small Hours, won the T. S. Eliot Prize and it is divided into four parts. Although each section has its own thematic concerns, the poems interlock in such a way that larger questions about the scope of history rise off the page. To read this collection is to realize that you are in the hands of a very skilled wordsmith as well as a sharp-eyed student of history. For example, the first poem in the collection, “Match Girls,” nudges us to consider economic injustice, labor, and how the weak are often devastated by the powerful. The poem opens with young women in nineteenth-century American factories licking matchsticks to make them stiff. By doing this work, they are slowly being poisoned by phosphorous. With this deadly image in our minds, Kusnetz slides us back to ancient China where Emperor Qin Shi Huang (the same man who built the Great Wall and had an army of terracotta warriors constructed to protect his grave) swallows poison in the hope of gaining eternal life (3-4). The reader is therefore invited to consider how obscurity and notoriety operate in narratives of history. To read this poem is to hear an echo across the centuries.

From this subtle and powerful opening, we find poems that ask us to consider the lives of Wilhelm Röntgen, who discovered X-rays, Henry Shrapnel, who expanded “the known radius of pain” with his new weapon (14), Emperor Commodus, Galileo Galilei, Marie Antoinette, Albert Einstein, and Toyotomi Hideyoshi who, in 1598, ordered all Koreans beheaded and their skulls shipped back to Japan (the weight of so many heads proved challenging as cargo, so ultimately only the noses of the dead were delivered to Hideyoshi).

Very clearly, Kusnetz is a poet who sees the wide horizon of history with unusual clarity and she brings disparate moments of the past into conversation with each other—the affect is both enlightening and arresting. The second part of Small Hours is a stark reminder of the maxim: we are all born into history. Here, Kusnetz explores the monumental suffering of World War II through the prism of her own family past. We therefore have a poem like “The Eagle’s Nest” which discusses how her uncle Louis, along with other men in Easy Company, capture Hitler’s mountain house. While some of the soldiers uncork bottles of wine, her uncle reaches for a number of children’s books. As a six-year-old, Kusnetz picks up these books and asks her uncle who they belonged to. A few pages later, we read “Hitler’s Alarm Clock, 1945.” We learn that her uncle carried this particular item back to Brooklyn where his sons later took it apart out of curiosity. What happens next illuminates not just a moment in family history, but also something much larger: “every wheel and cog and spring / spread across the living room table […] a senseless array of parts / forlorn disassembled countries, / or memories whose narratives / lie lost and scattered like ash” (25-26).

Immediately following this poem is “Archival Footage,” which is about that moment when Germans from nearby Weimar were brought into Buchenwald to see for themselves what the Third Reich had done—the bodies, the ash, the shrunken-heads, the lampshades made out of human skin. From here, we move into “Dina” which is about a prisoner at Auschwitz-Birkenau who is forced to paint portraits of the Romani shortly before their deaths. When we turn the page, we are confronted with “Aquarelle Vase with Roses, and Self-Portrait, 1910 (A. Hitler)” which is told in the voice of the Führer himself. These two poems are clearly meant to be in dialogue with each other and Kusnetz trusts her reader to see how the act of painting in one poem resonates against the act of painting in the other. In fact, this deft touch is on display throughout the whole collection. One poem begins a thought—we then turn the page—and another poem continues that thought but in a slightly refracted manner. As a result, the narrative arc between poems is just as masterful as the individual poems themselves.

Take for example, “Enola Gay.” This particular poem is told from the perspective of the B-29 that dropped the atom bomb on Hiroshima, and Kusnetz nimbly employs the trope of motherhood. The plane, named after the pilot’s mother, gives voice to its feeling of birthing something new and wicked into the world: “And when, from my open hatch, the bomb dropped / birth-wracked, every mother’s son inside me / pressed with joyful terror against the glass / to watch our Little Boy fly at last” (34). On the very next page we find “The Birth of Godzilla.” Motherhood is implied in the title of course, and it is generally understood that Godzilla is a cinematic metaphor of the atom bomb laying waste to Japan. Kusnetz uses these ideas with great precision and originality. Thus, while these poems stand alone beautifully, they work in tandem even better.

Much of Small Hours is like this. Kusnetz trusts her reader to make connections and we flip back and forth between the pages with the same sense of curiosity and awe that Kusnetz herself so obviously has for history. To finish this collection is to hear the low reverberations of the past, and we are also invited to look backwards at the poems we have just finished in order to see them anew. Parts three and four are full of wry humor (“Jesus Has Risen”), musings on painting and life (“Ideal City, Dream Sequence,” “Woman in a Hammock, 1916”), and gentle moments of grace amid the failings of our own bodies (“Holding Albert Einstein’s Hand”). The voice throughout is intimate, compelling, and full of poignant empathy. Sweeping in scope, Small Hours offers much on its first reading—there is even more to discover upon subsequent readings. Engaging, powerful, and impressively thought-provoking, this is a collection that will remain in your imagination long after you’ve put it down.

Patrick Hicks is the author of Adoptable, This London, The Collector of Names: Stories, and The Commandant of Lubizec: A Novel of the Holocaust and Operation Reinhard. He is the Writer-in-Residence at Augustana University and a member of the MFA faculty at Sierra Nevada College. His website is www.patrickhicks.org.