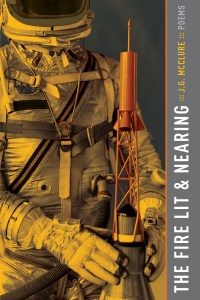 Whenever I encounter a new volume of poetry, I open the book and read the first randomly chosen line my finger falls upon. I do this as an act of divination, though I’m not concerned with presaging any future occurrence in my own life, but as a way of predicting how my subsequent reading will proceed. In this case, my practice led me to the following line: “Poor fucked-up McClure, stop fucking up.” From this very brief excerpt (a single line) midway through The Fire Lit & Nearing, I’m able to discover a clear and defined set of approaches and preoccupations that play out in McClure’s poems: 1) colloquial and sometimes shocking (or what was once shocking) language, 2) a prosody that includes repetition, assonance, internal rhyme, and heavy reliance on accent, 3) a self-referential and often self-effacing exhibitionist persona, and 4) a clear identification with the poetry tradition.

“Poor fucked-up McClure, stop fucking up,” is the opening line of “Little Anger Poem,” a loose translation of the Roman poet, Catullus. The original Catullus—typical of his self-conscious, self-referential poetry—begins, “Wretched Catullus, stop being a fool.” Clearly, McClure echoes Catullus’ attempt to convince himself that even though his girlfriend is dumping him, it’s all for the best. However, he goes well beyond Catullus’ rationalization that she will ultimately lose out, having no one to praise her beauty, no one to kiss, no one’s lips to bite. Instead, McClure, ventures into a realm approaching toxic jealousy, ending the poem with: “Whose lips are you biting? Whose?”

Those lips, of course, belong to Ellie, a figure who makes appearances throughout the collection. She’s front and center in “Romantic,” another nod to the Western poetic tradition.

The 19th century showed up drunk again;
Keats is sobbing on my couch something

about a nightingale. Wordsworth watches,
a disappointed dad sipping gin.

O, Ellie, it should have been our time—
we were so good at sadness.

is made of absinthe and frustration.”

McClure endorses Romanticism and simultaneously undercuts the Romantic stance, with Ellie’s restrained participation and reluctance to play along.

Even when Ellie is not mentioned by name, she seems to lurk—a secret hero of these poems, almost like the “N.C.” of Ginsburg’s “Howl.” Ellie seems to appear in the figure of Penelope in “Odyssey II,” McClure’s post-modern critique of the epic tradition:

And what is Penelope beside The Idea

of Penelope, for whom he longs
beside the sea, watching the rise

and dip of distant masts? O gods,
may we find a way to her.”

The beloved is always distant, always beyond reach, too much a projection of the poet’s mind. When he tries to discover the actual person and not the persona, the result is both banal and horrific, as in “Nothing Will Be Alright, But Thank You Anyway”:

This a perfect example of McClure’s bold use of repetition, rhyme, and alliteration. It’s also a prime example poems that attempt to elegize his dead relationship with Ellie. And not only his attempts to deal with the devastating loss, but how that loss seems to permeate the realms of poetry. In “Last Days”:

the household gods got in the wine again,
gnawed through sacks of rice and Cheetos.

The gods are mighty, high off stolen pills.
the exterminators only shake

This perspective, the degraded world (and language), lies at the heart or McClure’s poetic practice, presented in his “Ars Poetica” as piano keys “that scare the rats shitless.” Ellie and her rejection seem embedded in his very poetics, in the structure or his poetic language, his prosody of grief. In “He’d Be Happier, He Thinks, if He Could Hate the World Purely,” he sees deflated animals in a nativity scene “rump-up and luminous. There’s luminous,/Which rhymes with ruin us—” This perspective extends to the natural world in the extreme pathetic fallacy of “Making Sense of It”:

We could try out other facts. There’ a sea cucumber
that can liquify itself, twist inside out and eject its guts
to poison enemies. Imagine what we could do with that one.”

Still, the most compelling poems revolve around the figure of Ellie, whose rejection of the poet seems as compelling as Petrarch’s Laura or Catullus’ Lesbia. She stands behind many of these poems, sometimes just out of sight, as in “Portrait of My Longings as B Movie Script”:

And I find it especially pleasing when she appears, as a kind of syllogism or at least the dilemma of her present absence, reads like a philosophical problem, a puzzle or a riddle, as in “Self-Portrait With Ellie at Sea”:

…. The crew of Boat A
couldn’t stand it any longer,
alone on the splintery deck of their leaking boat,

so they swim to Boat B.
Boat A rose without their weight.
But Boat B took on water…”