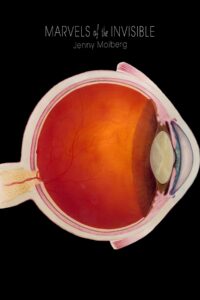 Marvels of the Invisible
By Jenny Molberg

Marvels of the Invisible, Jenny Molberg’s debut poetry collection and winner of the Tupelo Press Berkshire Prize, is steeped in bodily loss that begins at the cellular level. In the title poem, as the speaker’s father, now a child, plays with his toy microscope, time moves between past and present—the father’s 1960s childhood, his wife’s ordeal with breast cancer, and the speaker hovering as an observer in these both joyful and painful moments. The poem recounts the father’s boyhood fascination with fire ants as he views them under the microscope, where “The body, / almost sickening in its translucence, / hurls into itself; the bright red thorax, close up / is butterscotch.” In the hospital, the mother’s “blood blossoms” when she is touched by her husband after her mastectomy. This careful dance between the delicate and visceral continues for the speaker, who must navigate her own losses amidst memories that remain imprinted on the present.

Mothers and motherhood frame the collection, with the sequential poems “Echolocation” and “Matryoshka” exploring motherhood as bodily vessel and as ephemeral. In “Echolocation,” the speaker laments the potential child:

That night, I woke; I remembered you—
a small heartbeat inside me hone still.
I try to convince myself of an afterlife;
when a whale dies, it lives a second time.

Even in her efforts to make sense of this loss, the speaker must reckon with this recurring image of the whale and the ocean that consumes her dreams. “I walk the shallow water for what emerges / in its absence. And yours. Deep down, / whale song so loud,” the speaker remembers, understanding how the unborn child will live as a memory made flesh only within her mind. The triptych “Matryoshka” moves from the child’s to the mother’s body, likening it to a Russian nesting doll. Observing where the doll pops open to reveal another, the speaker notes, “This is where / the mother is broken.” As the mothers become smaller, the speaker realizes

Each mother
becomes my daughter and I become
each mother. I hold myself
in my hand. This is my secret—
I have seen how small
I can be.

The dolls become the dissolution of the self for the speaker, who must learn to put herself back together despite of the ease of being pulled apart.

Such insistence on putting back together comes to the fore through myth making. Molberg crafts a family mythology throughout Marvels of the Invisible as she weaves ancestral past into the present moment, solidifying a lineage and legacy through the creation of each poem. In “Christening,” an early formation myth, the speaker looks at her past self in infancy: “I am in an incubator, jaundiced,” with “eyes covered / with a sterile blindfold and a blue light / breaks up the bilirubin in my liver like glass,” as the mother cannot decide on the name due to the baby’s indeterminate eye color. The speaker enters this scene with the knowledge of the present, but sees the moment as though still a newborn to see how the mother “recognizes her own dark flash.” The child’s eyes eventual settle on “indistinguishably umber, like its match.” The unsettling conclusion seeps into much of these other mythologies and memories, like in “Atropos,” one of the three fates in Greek mythology. “Memory, // that dusky goddess, sleeps with no one,” the speaker recalls as she recounts the memory loss from Alzheimer’s in her grandparents. But despite this bitter recollection, the speaker turns to the future, imploring, “Please little someone, little not-yet-born: / for us, remember.”

Balancing intimacy and distance, and reckoning with the power of the past, Marvels of the Invisible continues to point toward the future while inscribing the past through poetry. The speakers in these poems are hopeful that a family legacy can be recovered in all of its pain and flashes of joy. Molberg’s poems carry an emotional weight that grips onto that longing, imploring readers to enter these rooms of memory, where the body must recover and remember.