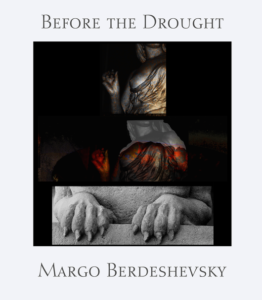 Before the Drought
by Margo Berdeshevsky

In a way that mimics life, Margo Berdeshevsky’s Before the Drought never lets us settle, in the most elegantly unsettling of ways. In this collection of 44 poems, Berdeshevsky asks:

Gun or grave or war or holy, which of you haunts
harder…?

The reader accompanies Berdeshevsky as her “body-beloved-bully” carries her through the act of being human and aging, wades through love and its repercussions, tragedy, death, and ghosts. At the same time, she asks if there’s a difference between any of these concepts, and we confront the thought:

Why does my skin want me in her
does she know she’s holding a woman in?

The latter half of the book includes a handful of short poems which give the reader a brief space to breathe, and time to process how incredibly un-simple these things really are. Interlacing pieces that investigate girlhood, memory, and loss, ultimately she leaves us with:

The result of the juxtaposition of the deceptive simplicity of Berdeshevsky’s language and the complexity of the topics she approaches is a collection of lyrically engaging and accessible poems that truly speak to the larger human experience:

Surgeon, when you opened the redhead’s belly to deliver me,
did I look like I belonged?

Before the Drought is a meditation on bearing witness to points in which we’re on the precipice of some other stage—when we can recognize where we’ve come from, where we are, and where we might be headed. Throughout the work, there’s a sense of desperation of coming into our bodies or as we recognize our own humanity, what it means to be always growing, and how we encounter and re-encounter ourselves in relationship to our universe, our bodies, and the finite.

In what’s perhaps the question of the book, “We are good people / aren’t we,” Berdeshevsky ghosts her reply and instead asks us to reimagine what growth, destruction, and reconstruction can look like. What the body can do, what a poem can do, and how we reach for answers when:

The root does not care
where her water comes from.

Berdeshevsky reminds us that the poem is only a poem in much the same way that:

It is only a body. That is one lie.