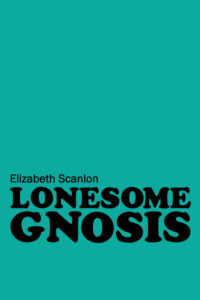 Elizabeth Scanlon’s debut collection of poetry, Lonesome Gnosis, begins in Sanskrit: “They chant Kali durga namo nama because, I said, / some things just sound better in Sanskrit.” What follows (“it’s not about you get over it”) is an English permutation of the initial mantra, a reworking of reference and spiritual framework that illustrates the collection’s concern with—and devotion to—the earthly, the historical, and the irreconcilable. It would be well enough to strictly reference Sanskrit as it applies to spiritual practice, but, by inviting the original thought to inhabit a colloquial register, Scanlon conveys the important role place plays in reckoning with what is at once worldly and spiritual, ancient and intrinsic.

Thematically, Lonesome Gnosis concerns itself with many large topics—love, spirituality, and mortality among them—but the tactics it employs to address these concerns are rooted in the personal, particularly as it pertains to environment: Philadelphia, for instance, features prominently in these poems, and, in many ways, Scanlon invokes the city as a means of accessing the deepest material levels of her metaphysical concerns. Some of these points of reference are so local that they ironically take on a mythic quality. The degree to which one is familiar with the landscape these poems inhabit undoubtedly alters their reading; however, the poems do not lock anyone out; rather, as someone who is close to Philadelphia, I found myself simultaneously transported back to it and invited to consider it anew. In “A Taste for It,” Scanlon takes us to South Philadelphia and then to Rome: “here in South Philly we have gotten too far away / from what the Romans knew so well.” On the one hand, the Roman reference is a wink at South Philadelphia’s Italian heritage, but on the other hand, the reader is asked to consider the contemporary and the colloquial within the context of the Roman Empire. And we can have it both ways. Scanlon joins the traditionally working class section of the city with the grand and mythic, and, in this way, she measures the realities of contemporary Philadelphians against those of the ancient Romans—realities far removed from one another, yet firmly located within the framework of empire.

All this is to say that reference is not merely a pointing to in Lonesome Gnosis. Reference as mere epigraph begs for relation, and more often than not proves to be supplementary rather than integral to the experience of a poem. Scanlon refuses this. Hers is an embedded poetics: in order to write this book one must have lived in this—both the literal space the poems occupy and the tumult the poems circle around.

It is within these spaces that Scanlon stages her interrogations of the ineffable. Her speakers’ searching and anxiety are born from the title: loneliness. People die in these poems. People do cocaine. People pray. Strippers strip. So much of this is concerned with the conditions of living and how people get by, monetarily or spiritually—even when the spiritual seems far away, as in the instance of “Take-Out”:

OK, sure, the meaninglessness gets to me sometimes:
the man loading bok choy into the basement
off the truck emblazoned True World Food,
[…] How quickly aluminum goes cold emptied of curry take-out.
But it only troubles me sometimes.

There is something unabashedly O’Hara about these poems. Nothing is off limits; in this post-pastoral metropolis of take-out and laundromats, everything gets to be big, and the otherwise discarded is made beautiful and imbued with music: “In Retrospect” rhymes “coffee” with “Journey’s”; “Advice” does the same with “commute” and “you,” all while talking about someone dying on a subway platform; and “Closing Time” sonically joins “life” and “right” in a poem that embraces the sublime even as it masquerades as ugly: “& on shoulders rests the mantle of life. / Minky stole, steal away, make it out all right. / […] We’ve all learned what to do here. / I’d call it guilt if it didn’t suit so well.” Like O’Hara, the contemporary becomes timeless, and Lonesome Gnosis both laughs at posterity and declares the cultural moment of each poem worth record. Similarly, Scanlon’s poems neglect generalities in favor of the intimate, and not just romantic intimacy but the intimacy of home—its vernacular, its crawlspaces—to truly embody a human experience, one that does not deny but rather embraces identity, personal history, and how one has come to see and live in the world.

Regardless of their candid observations and humor, these poems are not simple fun. Amid the sonic play and winks there are bold political and social critiques—jabs at America’s short memory and its fetishization of women and girls, critiques of pop culture figures, as well as comments on the erasure and gentrification of Philadelphia, such as a poem dedicated to the “Naval Home once found on Gray’s Ferry Road” (an asylum which is now condominiums). This work is interested in existing inside erasure, inside absence, in that the material may leave, but the frameworks the material has created (personally, socially, and politically) may be kept alive—as evidenced by a poem’s inherent act of memorialization: putting words on the page as a record.

When something is erased it is kept alive by myth, or it is accessed again through searching. Gnosis, from the Greek for knowledge, is without its usual prefixes: pro-, dia-, a-, etc. While on the one hand, these poems seem to articulate the knowledge acquired through lonesomeness; on the other hand, they seem to address “gnosis” all by its lonesome: if the usual suffix is made to stand for itself, then the knowledge it concerns itself with is everything, and in this way this book mines (almost) everything that its subjectivity has experienced.

There’s an irony to Lonesome Gnosis (the title): knowledge is immense and depends on information, history, and communication, all of which do not happen in a vacuum; the book also inhabits a city, one occupied by more than one million people; and yet, this book states that despite these conditions the speaker is alone, as is the ultimate result for everyone over the course of history and on a long enough timeline. Much like the poems inside, which make merry of the plain, the gritty, and the real, the title rhymes both sonically and thematically: in a sense, it says that one is always alone—but it offers you a world of particularity and experience that suggests even the lonely experience joy.