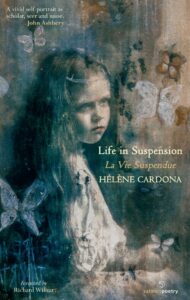 If a purpose of poetry is to transcend, then Hélène Cardona’s poems in her new book Life in Suspension / La Vie Suspendue reflect a linguistic spiritual transcendence that is illuminated on every page.  It is a transcendence, however, that doesn’t ignore the deeper conflicts of life.  Rather, each poem is a moment of awakening and presence that blooms something in the reader akin to a mystical revelation grounded in the physical world.  Grief, childhood, death and rebirth, longing, mysticism, the holiness of beauty, a oneness with animal nature – all are touched upon and lit away from like a hummingbird testing ground.

Life in Suspension / La Vie Suspendue was first written in English and translated by Cardona into French.  An acclaimed poet, actor, and translator, Cardona, having grown up in the various Mediterranean countries that are visited in this collection, is herself multilingual.  This innate knowing of multiple languages and love of literature and word is felt in every line, resulting in the sense that language is a rivered vehicle for the thoughts, emotions, and sensory perceptions of one particular human being, suspended over rushing waters.

Poetry, writes Cardona, “offers a new vision of the universe, reveals the soul’s secrets and mysteries.”  The collection is broken up into four parts, with each part representing a different dimension.  The first section reveals memories of Cardona’s childhood, and evokes the same kind of sensory perception of land, home, and nature, as she writes in the first verse of the poem from which the title is taken:

Let me introduce myself.

I’m the Memory Collector, your companion, and spirit guide.

Let’s unwind the clock, peel the past.

This passage back through time in Part I introduces the reader to Cardona’s mother, the Kitty of the dedication and of the first poem.  Kitty, who is referenced in the dedication as having passed away, commences the book with an epigraphic poem of her own, “To Kitty, Who Loved the Sea and Somerset Maugham.”  She pervades the book, slipping in and out of scene like a winking ghost.  Reading Life in Suspension / La Vie Suspendue is like unveiling a code to Cardona’s interior landscape in memory of her mother.  Later, in Part 4, the speaker in the poem “C’est comme ça” travels to Peru “over the fire road to perch on the rock that bears my spirit,” where she hears “my mother’s voice echo / you’re all the sunlight / that’s ever been in my life.”  Death and grief make for fertile ground in a living connection between Cardona and her mother in these poems, as well as with her extended family, in recent generations and beyond.  In “In Search for Benevolent Immortality,” Cardona’s family and her memory offer her grounding and solace in the yawning greatness of time.

I hear beyond the range of sound

the ineffable, the sublime, my mother’s

voices, to soothe and heal the sorrow.

References to other poets and writers in epigraphs lend another clue to the world Cardona inhabits (or, the other-world) in the first part as well as the subsequent three sections: Carl Sagan, E.E. Cummings, Mary Oliver, Rumi, and Walt Whitman, whose Civil War Letters Cardona translated into French for the Iowa International Writing Program’s WhitmanWeb.  Whitman’s presence resides in these poems, in the deep immersion into nature’s wonder and mystery, the tender buds of spring existing side by side with the bones of the dead.  The simultaneous and cyclical contradiction and merging of nature’s elements: earth, air, fire, water, and, not to be forgotten, ether.  Space exists in these poems, the outer space we see as vast and far off, and the same space existing here and now in our bodies.  Cardona’s language is descended from the great mystics, with words and phrases plucked directly from the natural world, like an arm reaching to grasp a leaf floating in the air.  In speaking of her grandfather in the poem “Stone,” she writes “we have the same ear for reading / the bones in the wind / and breaking down the sun.”

The poems feel as though they exist in the single language and in all languages at once, as though translation was unimportant, an afterthought, as these poems would transcend the bounds of any language in any tongue; and simultaneously as if translation was never so important, for the choice of words is so effortless as to only exist in that state of “suspended” perfection.  As Richard Wilbur writes in the Forward, “…for such a many-languaged mind as hers, the ‘translations’ must have been there since the beginning.”  It is the depth of the impression of the native tongue, the same impression of memory and sense Cardona ‘remembers’ linguistically, particularly in the first section, that permeates the language of the poetry.

Yet for all this reflection on depth of language, Cardona’s poems are remarkable in their directness and simplicity.  “I understand the nature of plants / I used to be a flower / I like morphing into an animal / devouring who I was” she writes in “How God Thinks Is Surprising.”  Understanding the nature of the world, morphing and devouring, Cardona’s poetry embraces the reader on a timelessly mystical journey.