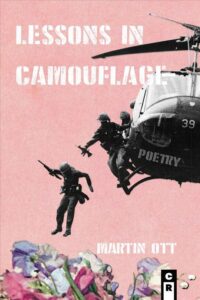 When I received my copy of Martin Ott’s Lessons in Camouflage, I was first intrigued by Ott’s background as a U.S. Army interrogator because I don’t often think of poets in the context of their “other” lives. And, Ott does not disappoint as he incorporates his experiences, explorations of masculinity, and of course, war. This is not to say that the poet must incorporate the “other” life, but it does make for unique and exciting poetry. Lessons in Camouflage does not limit itself in subject matter, however. The poems, often through formal movements such as the usage of iambic pentameter or rhyme, go where they want in a natural progression. The collection provides the reader with meditations that spur introspection and curiosity, and Ott reminds us that sometimes we need to look closer.

The collection’s opening poem, “The King of Camouflage,” gives the reader a chance to immediately interrogate the meaning of the collection’s title. What is camouflage in every sense of the word? Why is camouflage necessary in any given situation, both actual and metaphorical? Ott gives us a glimpse into some of the answers:

Yesterday’s sky is my molting skin.
My soldier’s makeup stains the plays
on a global stage, the actors dead, maudlin
applause sweeping across your family’s strays. (5)

In these lines, camouflage functions as performative, and war is the theatrical performance. This idea does not diminish war in any way, as Ott reminds us that death is real and present. On a formal note, Ott doesn’t shy away from rhyme which enhances the notion of performativity. We should also note how well the rhymes are embedded naturally in the lines, rather than being predictable or forced.

The next two poems also use formal moves to reinforce the performative aspect of poetry. “Mile Post,” which is an important poem to the mythos of this collection, uses refrains much like a villanelle does to reinforce crucial moments in the poem. Ott asks, “Why am I still running from camouflage?” (line 3), which begs the reader to think of what it really means to run from camouflage in the first place. For the speaker of the poem, the act of running from camouflage is tied to the Army, lost soldiers, the Boston Marathon bombing, and other interesting intersections. This poem makes us think about what it means to run from something, and to ponder whether doing so is an act of strength or fear.

The poem which follows “Mile Post,” titled “Invisible Monsters,” employs an iambic pentameter strategy and covers much ground in terms of content; the poem explores fatherhood, fear, and war. This is not to say that the poem is trying to do too much—Ott does a fantastic job in uniting the content seamlessly. Ott writes:

…gripping a father’s belt and the crackle of life
slipping away with tonic and gin. Soldiers are sold
and the rich men grow bold in the distant haze
of another spin. I hold my son close sometimes
so he can sleep and reach out my hand for the moon
soaked in sun, a way to delay the beating of wings. (9)

I appreciate how Ott takes on societal issues while simultaneously confronting something like consoling a frightened child. The blend of ideas and subjects makes the poem work, and Ott has mastered this technique within the collection.

As the world that Ott presents us grows, Ott also shows us an exciting range of poetic moves and subjects. In the poem “Pilates Instructor Calls 911 After Mistaking Labradoodle For Lion,” readers are presented with a more whimsical situation, but the level of contemplation doesn’t stray; the situation is that a large dog resembling a lion is on the loose in a yoga session, and this scenario plays out interestingly. It is nice to see a moment where the speaker of the poetry takes a moment to appreciate the more mundane or quirky moments that life offers, and yet the speaker does not treat this moment as frivolous or unimportant. In fact, the last lines, “an excited beast chasing a giant ball / over matts made on distant shores” (lines 19-20), are highly suggestive and cause the reader to pause because there is a connection to the outside world beyond the fitness center—a world that we see isn’t even an afterthought in the minds of the frightened fit people. Perhaps, then, the camouflage here is the guise of what is real and what isn’t, or what is distant and what is close to home.

The camouflage of masculinity appears again as we proceed through the collection in the poem titled, “Dangers Of The Road.” Ott writes, “My sergeant once told me that killing /
another is our passage into manhood…” (lines 9-10). This violent notion of manhood serves to provide yet another layer of camouflage—do this violent thing and you will be a man—maybe even look like a man. But, Ott points out later in this poem that life “began after [his] daughter was born” (line 21), which suggests that there is more to existence than war or stereotypes regarding masculinity.

The final poem in the collection, titled “33 Lessons In Camouflage,” is composed of 33 non-rhyming quatrains that meditate on the speaker’s experiences and identity. All of the stanzas keep the reader engaged and moving forward, but my favorite stanza is 31:

We lose ourselves in books, in love making,
in the crannies of our work and passions,
the miscellany of the unrecorded world,
discovery of who we choose to master. (53)

While all of the stanzas present some sort of interrogation of camouflage, this stanza provides the reader with the notion that we choose to master a camouflage, and in doing so we choose the identity that we present to the world. Our camouflages are then like a selection of paints that we use on our canvas lives—a notion Ott presents that provokes thought and introspection for the readers.

I have thought about how I create my identity often, but Ott taught me how to think of camouflage in the context of identity. Camouflage is everywhere, according to Ott’s Lessons in Camouflage, and we are better off when we understand which camouflages we choose, and why we choose them. Ott’s poetry employs rhythm and form, and shows us how camouflage is unrelenting and often misleading.

Adam Crittenden holds an MFA in poetry from New Mexico State University where he was awarded an Academy of American Poets Prize. His writing has appeared in Barrelhouse, Bayou Magazine, Tupelo Quarterly, Barn Owl Review, Whiskey Island, and other journals. Blood Eagle is his first full-length book of poetry and is available from Gold Wake Press. Currently, he teaches writing in Albuquerque at Central New Mexico Community College.