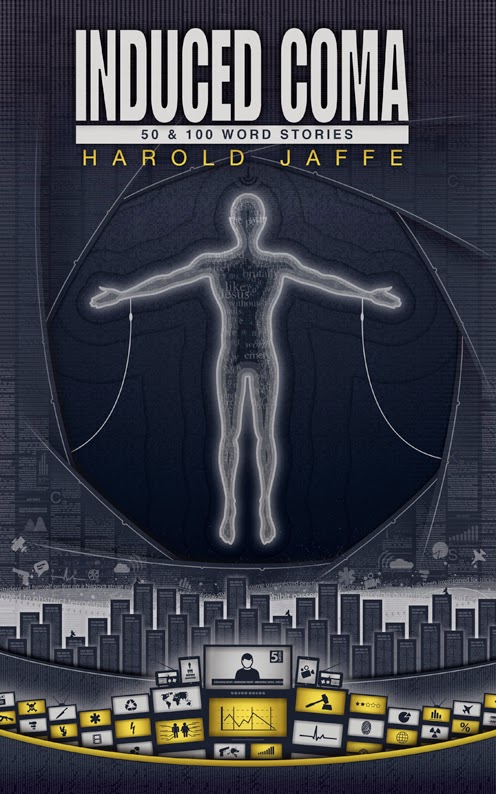 From “Holy Seaman” to “Obama,” to “World Peace,” to “Queef,” Harold Jaffe’s Induced Coma takes you on a whirlwind ride through his innovative, astonishing “micro-stories.” From the first glance, this book reads like a morning Facebook news feed: from silly first-world complaints to outrageous viral news stories: Jaffe’s micro-narratives encompass the tragedy and hilarity of modern culture. But as the book proceeds, and one reads story after story, each a fifty to a hundred words, Jaffe’s micro-stories pack a real punch: Jaffe manages to pull a laugh while leaving the readers feeling as raw as if he just exposed all ills of the world.

Induced Coma is a satire of modern culture; however, while the content is often times comically crude or over the top, these topics do not undermine the sincerity of the powerful message of Jaffe’s work as a whole. In fact, it is through the queefs, the nuns on bikes, and Hitler’s farts, that we begin to understand Jaffe’s powerful message: society is in an induced coma. “But isn’t this coma-land of yours just a degraded version of Nirvana?/ Absolutely.” Jaffe boldly states in his first micro-story; the coma-land that he speaks of in his work is modern culture’s stagnation in a technologically advanced world. His work makes the argument that while we live in a world where we have infinite knowledge at the click of a mouse – knowledge that could cure social ills – we instead choose to use that very mouse to click through the Kardashians’ latest tweets or watch endless hours of viral cat videos. Jaffe’s micro-stories give us glimpses of the symptoms of society’s ills such as Global Warming, mental illness, and war. His central focus is America’s hypocrisy; he says in “Bald Eagles” that “It’s just hard to have your national bird in your arms when you can see it’s pain but don’t know what’s happening to it.” Jaffe is fearless in pointing out the dirty underbelly of American society, he says in “World Peace” that “The US has been voted the greatest threat to world peace…Unexpectedly, many American’s regard their country as a prospective threat with 13 percent voting the US most likely to disrupt the global status quo.” Like a doctor pieces together symptoms of an ill body to find a diagnosis, Jaffe pieces together events, news, and situations, to diagnose our diseased modern world.

Jaffe’s “diagnosis” is represented in Induced Coma’s cover art. At a first glance the cover art looks like that of a sci-fi comic book, but paying closer attention you will find that the cover art speaks volumes to Jaffe’s overall message. The artwork depicts a body suspended by wires over a city-scape. The body is translucent, and from within its form you can see words like “Jesus” and “War”. Below the cityscape, as if it is the foundation of the city, are multitudes of TV screens showing glimpses of news stories, men and women, and symbols (recycling, hazardous, water, snow). All of these elements put together create a profound argument. The wires that are restraining the seemingly lifeless body suggest that we are plugged into a city which is built upon news and media feeds, and we are unable to stop it.

While the content of Induced Coma is outrageous and comical, the overall tone of the book is grim. Jaffe, however, does not leave his readers without hope: Induced Coma provides the perfect platform for self awareness. It gives its readers the opportunity to laugh at themselves: Do we know viral cat videos are a waste of our time? Yes. Do we still watch them? Yes, and that’s okay because we are all laughing at each other for doing it. And this, dear reader, is Jaffe’s cure. It is what Jaffe’s micro-stories do so well: they not only provide a laugh, but they also expose our own hypocrisy and allow for us to become aware of our culture’s flaws and eventually—who knows? if we are lucky enough!— escape the induced coma.