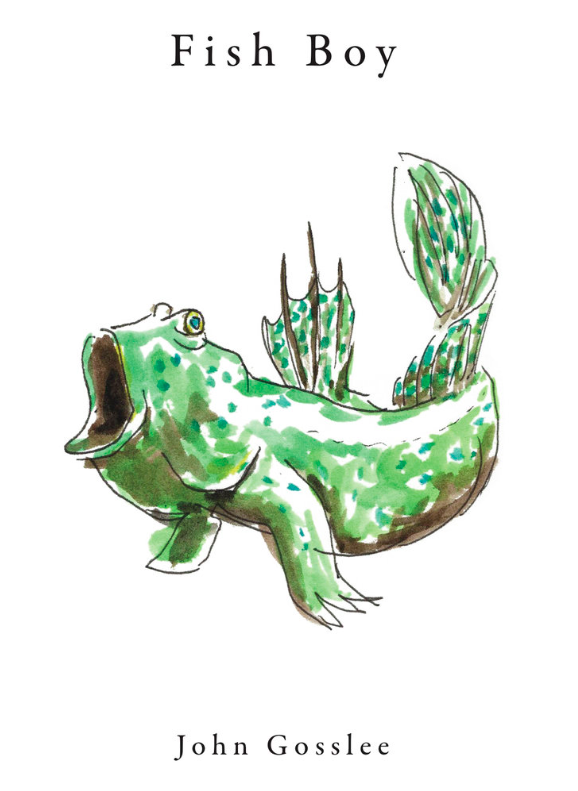 In Fish Boy, John Gosslee has created a tiny contemporary art museum for exploring the relationship between him and his father, and the relationship he has with his own identity. Gosslee has preserved memories of significant moments and feelings and curated them based on their own unique displays. Here, he instills much trust in the reader, which works double time to allow the speaker freedom in expressing his truths. There are images of boomeranging videos, boys in fish suits, and forests growing out of bodies.

In the title poem, “Fish Boy,” Gosslee begins with the image of a flashing movie intro likened to an anglerfish and ends on the image of a boy crawling out of the pond. What’s in between the two images is not to be ignored, either. Here, the reader gets an inkling into the arc of the collection and its major arteries, the struggle with identity and one’s path and the loss of a father. Also here is a taste of one of Gosslee’s strengths as a poet. His careful self-awareness is displayed in the lines:

He knows it’s not original to know
everything is cosmic dust, but also knows
he doesn’t know, if he’s significant or not.

Gosslee’s poems are marked with the spirit of a person whom has deeply contemplated time and its realities. The result isn’t just a speaker with a voice that invokes knowledge of the subject, but a writer whom understands how to manipulate time on the page. In “A Man Stands with Grocery Bags in Front of a Tank,” Gosslee opens the poem by simply presenting an image in a sentence fragment. He writes, “A looped video of endless snow.” The rest of the poem goes on, but this piece begs to be reread from that first image, because with the combination of a strong, well-placed image and simple presentation, Gosslee expands space for the reader ever so slightly. There is a natural break in time but no visual cue for exaggerated separation. Still, the white space feels much more vast.

In the effort to explore identity, one is undoubtedly called to the past. Gosslee’s speaker imagines the state of his birth in several poems, writing, “I was born naked…” and “I was born raw…” as well as bringing his imagined origins together with the state of his character. This is especially potent in “Beautiful Hour,” where Gosslee writes:

I’m the dark priest, the shaman,
grafted in and out of the living dirt
and I’m going to love like my hands are two stars
moving over the cities I walk.

My skin is a copy of the skin I was born in
and I don’t know what it means,
but I know there is a good me,
fire in the forest, ribbon maker.

There is a satisfying sense of balance in this small collection, where the reader can swim in the supply of uncanny images that seem to be washed ashore, maybe by the tossing that life promises for a person’s experience. Just when the reader thinks they might be floating too far out, there is refuge in the familiarity of a story of a son and his father.  In the beginning of the collection and at the end there are explicit scenes that include both father and son that give the reader the sense that both men value love and gratitude. In “My Beautiful Father the Firebird,” Gosslee writes:

He steers my face’s pale fire
from the psychiatrist to the hospital,
the stomach pump, the in-patient.

He says,
whoever you become now,
I will love him.

In the gorgeous poem, “My Father Defies Gravity,” the opening line is, “No, stay a little longer.” The speaker gives insight into the son’s mindset and further shows the value of this relationship. Exemplified here is the capacity for forgiveness and the power of words. The ending stanzas of the poem read:

I imagine no one comes.
The white bread and peanut butter
sandwiches for two years,
the foster home.

My father stands in front of the judge,
my blue hair like a fire, probation.
In the care he says, the important thing
is that you’re okay.

Writing off of someone’s death is not an easy task, neither for a son nor for a writer. The two aren’t mutually exclusive by any means, but once the writer steps out to begin, there is a question that beats and pulses like a fresh bruise until it’s addressed: Whose story is this? One of Gosslee’s triumphs in these poems is that the speaker opens up to reveal vulnerability, but the poems are never pulled too close to the son—or too far away from the father. These poems are written out of the speaker, but they are not selfish. There’s a clear sense that the poems are the father’s as well as the son’s. And now with a generous invitation from Gosslee, they become the readers’ too.

Sam Leon is an MFA candidate in poetry at Florida International University where she teaches undergraduate writing. She is the Assistant Managing Editor for Gulf Stream Magazine and a coordinator for the Richard Blanco Fellowship. Her book reviews and author interviews can be found in Gulf Stream Magazine, Tupelo Quarterly, and The Iowa Review Online.